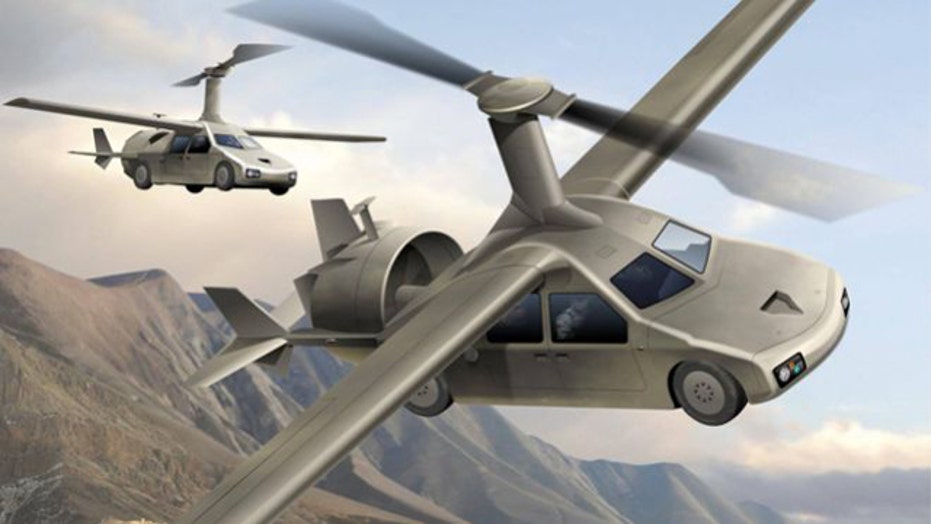 Are we less than two years away from tactical vehicles that both drive and fly?

The Real Off Road is around the bend for the US military… Two of the world’s top defense innovators, DARPA and Skunk Works, are determined to deliver in 2015.

The Transformer TX drives like a military ground vehicle and rapidly transforms to fly like a helicopter and can transform back again.

And like Transformers, these vehicles can be operated by humans or can even fly or drive themselves.

Or even fly warfighters into a war zone carrying a vehicle, drop them and the vehicle off and fly back to base on autopilot.

Aside from being self-evidently impossibly cool, combining a helicopter and tactical ground vehicle into one would provide the US military with some crucial advantages.

Transformers go to War
The US increasingly relies on small combat units with transport requirements over great distances and often over rugged terrain.

Currently, forces have two options to move around the battle space - vehicles and helicopters. But vehicles, even heavily armored highly mobile multipurpose vehicles, are at risk for improvised explosive devices, ambushes and obstructions on the road.

Helicopters are another alternative, but they are in high demand with limited availability.

The Transformer Solution
Utilizing flight, the TX vehicle can avoid ambushes and Improvised Explosive Devices (IEDs), while also allowing teams to approach targets from directions that could give them an advantage in ground operations.

With a Transformer TX in flight mode, small units could move in and out of forward operating bases, resupply and evacuate wounded warfighters – without having to compete with the high demand for helicopters.

Lockheed says that Transformer’s design with tilting ducted fans will mean a safer operating environment in smaller landing zones with faster speeds of up to 200 knots as compared to today’s helicopters.

DARPA’s original requirements for Transformer TX’s size is a vehicle that could drive down your average one-lane road so it would be about 8.5 feet wide and 30 feet long.  At this size, it could be transported to war zones in C-130s and stored in small ship hangars.

What will a real Transformer look like?
DARPA has thrown down the gauntlet with some wow factor requirements.

Like a Transformer in the movies, this vehicle will be able to transform quickly by itself, fly by itself as well as land and take off by itself.  It would even be able to avoid obstacles en route and in the landing zone.

Transformer TX will have a combat range of 250 NM on one tank of fuel whether it is driving, flying or a combination of both and be capable of a series of mission cycles.

Rather than require a certified pilot to operate it, the four-person vehicle, with its automated takeoff and landing, will be flown by a typical soldier.

Transformer TX will transform into a Vertical Takeoff and Landing (VTOL) so that means it will safely lift off or land without forward motion.

In flight mode, Transformer will be able to carry approximately 1,000 lbs with a minimum cruise speed of a light single-engine aircraft and a combat range comparable to today's rotorcraft.

On the road, the Transformer will have four-wheel drive with road performance similar to an SUV on a variety of surfaces.

Avoiding detection can be important in war, so Transformer’s takeoff, landing, and cruise will be at least as quiet as a typical automobile on the road and a single engine helicopter in the air.

And so what will it look like inside?
Inside the Transformer, it will be designed with forward and side visibility. Each soldier will be able to get in and out quickly under combat conditions. For medical evacuation, the interior will be adaptable for one stretcher and one passenger.

DARPA hopes it will have “passenger comfort” while withstanding small arms fire.

2015 Finish Line
Lockheed Martin Skunk Works, one of the world’s most premier and secretive defense shops, is celebrating its 70th anniversary innovating

In 2010, Skunk Works formed a team with Piasecki Aircraft Corporation and Ricardo, Inc. that achieved selection by DARPA to develop a Transformer.

Skunk Works was then also selected for Phase 2 and now Phase 3 with a 20.3 million dollar contract.

Following a review, DARPA will decide whether to green light Skunk Works construction of the prototype. DARPA budgeted 4,317,000 for further development next year and the goal is to fly the first Transformer in 2015.