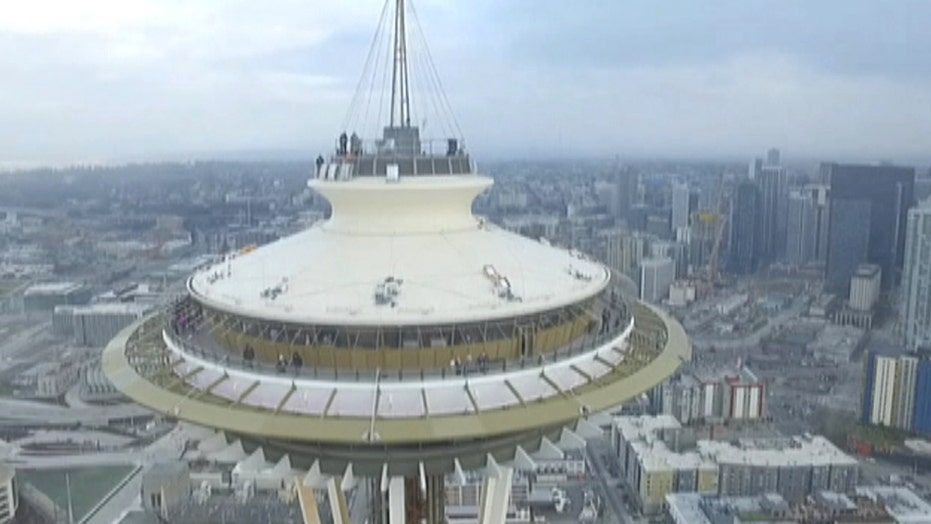 An incredible drone’s-eye video that shows an unfortunate flying robot crashing into Seattle’s famous Space Needle has just been released.

The bizarre crash, which occurred on New Year’s Eve, was captured by the drone’s on-board camera. After filming a stunning view of downtown Seattle, the drone, which is hovering near the Space Needle’s observation deck, suddenly accelerates and slams into the landmark’s roof.

Q13 Fox reports that the drone crashed about 575 feet above the ground and notes that the Space Needle was not damaged in the collision.

It is not clear who was operating the drone at the time of the incident. The crash was reported to the Federal Aviation Administration, according to Q13 Fox, which says that the drone is now in the possession of the Seattle Police Department.

The Seattle Times reports that the drone hit the Space Needle while pyrotechnicians were preparing for the landmark’s annual New Year’s Eve fireworks display. A number of  people can be seen working on the Space Needle’s roof in the footage. Apparently surprised by the sudden collision, one of the workers rushes over to inspect the hapless device after its crash.

Space Needle officials examined a card within the drone to see where it originated from and who the owner might be, a spokesman told The Seattle Times.

The incident marks the third time that a drone has been recovered on the property, according Space Needle CEO Ron Sevart.

“It looks like the drone tractor beam we installed on the Space Needle is working,” Sevart joked, in a press release cited by Q13 Fox.

This is not the first time that a wayward drone has hit the headlines. Last year, for example, a man was arrested for crashing his drone into the Empire State Building. In 2015 a quadcopter drone that crashed into the White House lawn sparked a security lockdown and Secret Service investigation.