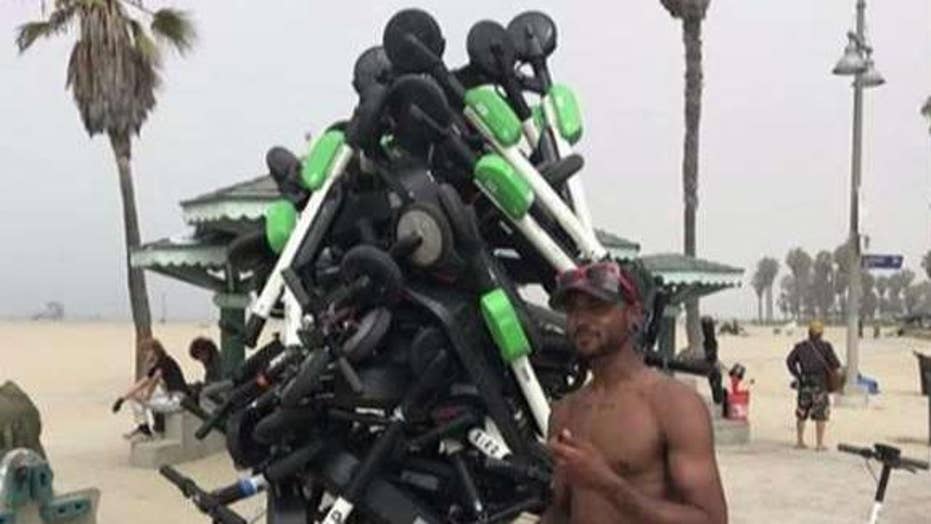 Residents in Southern California who feel they've had enough of the electric scooter craze are reportedly resorting to vandalism in an effort to vent their frustrations.

They allege they cause numerous traffic accidents and scooter pilots tend to rush through the streets ignoring traffic signals.

The Los Angeles Times reported on Sunday that workers at Santa Monica Beach and Venice have seen these pay-per-mile scooters tossed into the ocean and trash cans.

One police officer in Venice said his officers have seen them stacked 10 feet high, but these cases are not being called in.

“If we have to prioritize the allocation of our time and resources, first and foremost we’re going to prioritize the preservation of life,” Lt. Michael Soliman told the paper. “Protection of property comes second.”

Cities like Milwaukee have initially pushed back on Bird and its competitors, LimeBike and Spin, by issuing cease-and-desist orders. But some have ultimately relented and decided to give the scooters a chance.

Bird, a scooter rental company that operates in about 30 cities, previously removed them from Denver and Salt Lake City before resuming operations recently under a pilot program in those locations. Portland, Ore., is also allowing Bird scooters under a pilot.

There is even an Instagram account called Birdgraveyard, which appears to celebrate the scooters’ destruction. It has over 28,000 followers.

“We do not support the vandalism or destruction of any property and are disappointed when it takes place,” a Bird spokeswoman told the paper. “Nor do we support the encouragement, celebration or normalization of this behavior.”

A Bird spokeswoman hopes those who see any vandalism report it.

These electric scooters, which can go up to 15 mph, have proliferated in places across the country in recent months, often without warning to city officials who have grappled with how to regulate them. They could be found left in the middle of sidewalks, which could be an eyesore in a neighborhood.

These companies point to their overall affordability and the fact they reduce car traffic.

The Bird app shows where they're available. Riders, who must scan in their driver's license, unlock one by scanning a bar code for an initial charge of $1. It then costs 15 cents a minute to ride one. Once done, riders take a picture of where they left the scooter to make sure it's properly parked.

“If you imagine just walking on the sidewalk and somebody on a scooter at 15 miles an hour hits you, it can be fatal,” Beverly Hills councilmember Lili Bosse said last month after the California city voted to ban the devices for six months, following similar edicts and warnings in places like West Hollywood, Seattle, Saint Paul, Nashville, Boston and Miami.