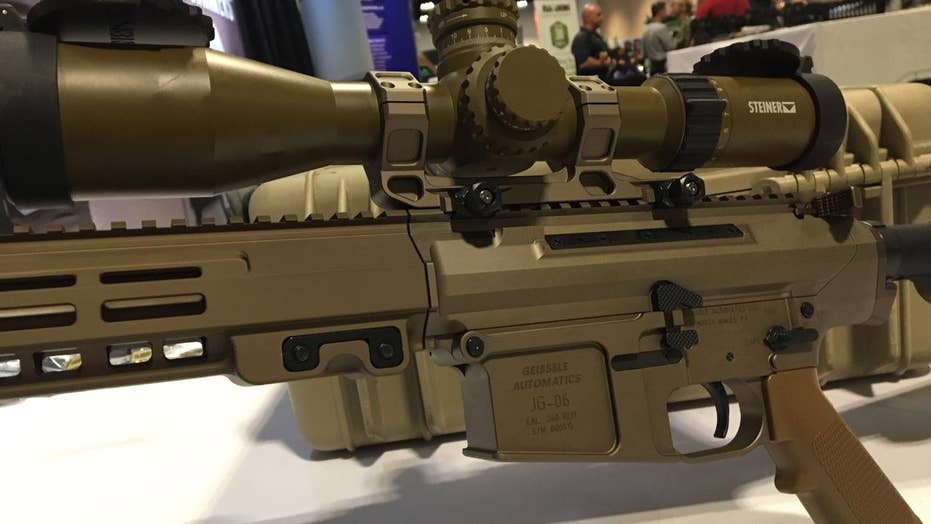 SOFIC best in show: Cutting-edge gear for US Special ops

Fox Firepower: Allison Barrie is in Tampa, Florida and takes us inside SOFIC, the annual Special Operations Forces Industry Conference where she shares her picks for the best cutting-edge gear for US Special Operations.

TAMPA. Fla. – What if a country with a deep, modern arsenal declares war on the United States?

For years, U.S. Special Operations has been harnessing the very best tech to fight terrorist organizations like ISIS and Al Qaeda … but now, with countries like Russia, China and North Korea rattling sabers, there is a renewed focus on cutting edge military technology.

Approximately 12,000 people from the special operations world are expected to attend. Hosted by the National Defense Industrial Association, special operations folks and military tech innovators converge to discuss the technology needs of these elite forces for current and future threats.

This year, the wish list will feature tech that can defeat entire countries that are well armed.

SOFIC provides an opportunity to window shop the latest and greatest tech from 425 companies designed for special operations.

Special Operations Generals and Admirals, along with current special operators from Army, Navy, Marine Corps and Air Force can hunt through about 900 booths in a huge space.

What can you see?

Remember Q in the “James Bond” movies? How Q has a mind-blowing workshop of tech for dangerous missions?

The SOFIC floor is like a gigantic Q workshop with a mindboggling array of vehicles, gadgets, garments and more – all designed to make special operations teams safer, more effective and even more lethal.

In fact, some areas could easily be mistaken for superhero workshops. TALOS is a prime example.

U.S. Special Operations has been working on a real-life Iron Man-type called TALOS. This tech is incredibly complicated and may sound impossible – and yet, every year the geniuses on the TALOS team continue to make astonishing strides and breakthroughs.

If Aquaman were real, then he’d definitely be outfitted by companies here like Patriot 3. Their tech is so advanced that I can’t disclose any details or show you any images. But what I can say is – what would Q make for Aquaman?

Atlas Devices continues to crush it and dominate in their domain. They are showing tech that lets commandos to scale walls as effortlessly as Spiderman. And that is just one example of their brilliant innovations.

Water is a key element for Navy SEALs, but also for the other special operations forces, so there are innumerable amazing advances in this area.

There are many competing devices that look like torpedoes, for example. They launch out of submarine torpedo tubes, but they contain commandos.

Warriors need to communicate so there are all sorts of devices, like unhackable secure phones that look like the regular phones used by folks across America.

SOFIC window shoppers have many options for next-generation body armor to consider. New combat apparel, new protection against chemical, biological, radiological and nuclear threats and new enhanced protection helmets are just a few of the “garments” to peruse.

Drones are everywhere. This year at SOFIC, there is a huge range on offer in all sorts of sizes, for all sorts of purposes.

There are surveillance systems and deterrents that blend invisibly into surroundings and are so good they can turn a backyard tent into a fortress.

SOFIC is also heaving with vehicles. From cars that look like regular cars, but are secretly fortified with advanced bullet proof armor, through to heavily armored vehicles and combat pimped-out Polaris Defense MRZRs.

And of course, there are weapons. Companies large and small have brought their very latest, and greatest, craftsmanship in rifles and beyond. As for as accessories, this year is particularly strong in optics.

In ordinary shopping, you spot something and you try it on.

SOFIC is important because it provides the opportunity for folks in special operations to look through the latest firsthand, but also to provide feedback and explain requirements to makers.

They get to pick things up and get a feel- but then they also get to see new gear in action.

Downtown Tampa erupted into a “war zone” Wednesday. Out on the Hillsborough River and the surrounding city, the U.S. and allied SOF used tech in a battle scenario complete with helicopters, firefights, fast boats and more.

Shifting from ISIS to Russia

U.S special operations has dominated in discovering, inspiring and adopting an unrivalled arsenal of cutting-edge tech to tackle the threat of terrorism.

Now, U.S Special Operations Command (USSOCOM) is again taking the lead to inspire, nurture and locate innovation to defeat a different threat – potential war with countries who have been quietly, but aggressively, building their own arsenals – not against groups like ISIS. Countries like Russia and China are two good examples of this preparation for war.

For country vs. country war, the technology needs are similar, but also can be different. And make no mistake, if war against a well-armed country should arise, then it is essential that the United States continues to dominate with the most advanced tech in all terrains: land, sea, air, space and cyberspace.

U.S. Special Operations will continue to be absolutely vital – making this year’s window shop for big boys’ toys a significant one.