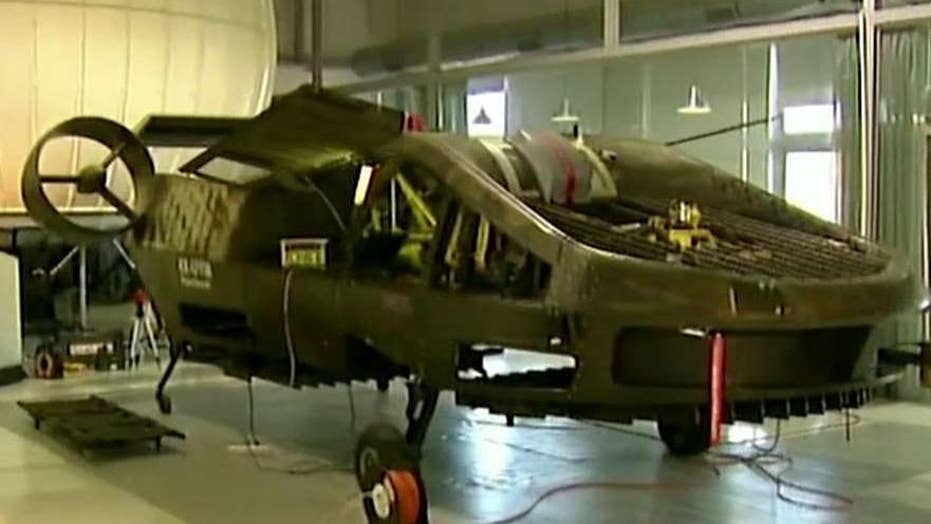 A self-flying war vehicle named the 'Cormorant' is currently being designed, tested in Israel, with plans to move production to the U.S.; Jonathan Hunt has the latest on this groundbreaking technology.

Imagine American soldiers in the mountains of Afghanistan, pinned down by enemy fire, the terrain too dangerous for a helicopter rescue mission. Those soldiers might have to be abandoned to their fate. But perhaps not in the near future, thanks to technology that is currently being tested in the remote deserts of Israel. And it promises to transform flight.

In the words of Philip Werthman, a California-based adviser to the board of Urban Aeronautics: "It is real, it is flying, and we are going to have it here in the United States in the next few years."

The “it’ Werthman is talking about is called Cormorant, a flying vehicle that, unlike a helicopter, has no exposed rotors. It could not only save American lives on battlefields a world away, but also on highways right here at home, because it could be used in civil emergencies or horrific traffic accidents to get to victims when helicopters can’t fly or can’t land.

"There's the concept of the golden hour,” he said. “In order to maximize survivability in an accident, you need to get to the victims and get that victim evacuated within an hour."

The idea for a vehicle that can go where helicopters can't was born out of the 2006 Israel-Hezbollah war, where it took on average of five and half hours to evacuate wounded Israeli soldiers, because, according to Urban Aeronautics CEO Rafi Yoeli, it was so difficult and dangerous to get to those soldiers.

“One reason is the ground-to-air fire,” Yoeli said. “The other is because of the physical limitations of a helicopter's rotor, it cannot land in a mountainous or obstacle area.”

The Cormorant is currently being designed and tested in Israel, with keen interest and support from the Israeli military, but the long-term plan is for production to move to the United States, and for both pilotless and piloted models to be available.

Yoeli said Cormorant could also save lives during terrorist attacks, including, “nuclear, biological, chemical decontamination… a dirty bomb in the city butting against a wall of a building and rescuing people. This vehicle can do all that because it doesn't have overhead rotors."

Urban Aeronautics said it hopes to be producing the Cormorant here in the U.S. by 2022.

The company calls it a win-win for everyone. Israel gets the technology, the U.S. gets the production. And countless lives, the company said, could be saved.