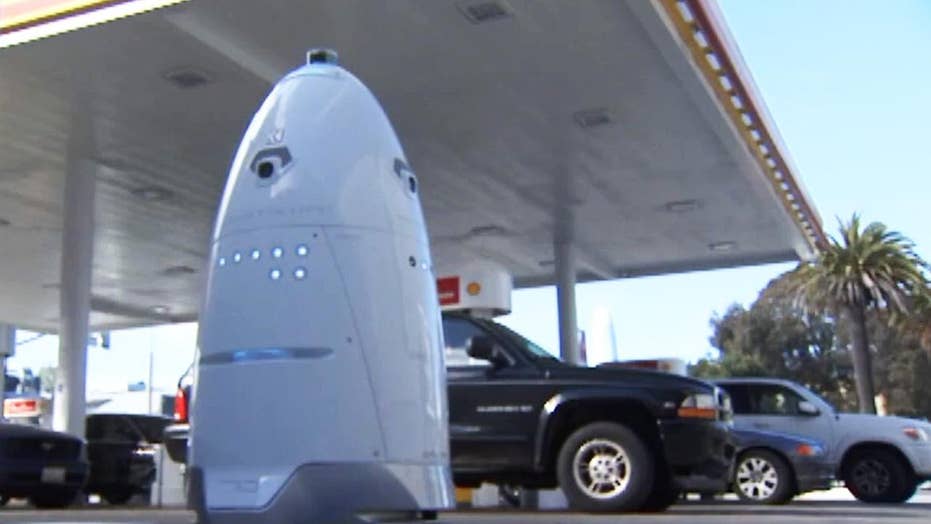 Robots are popping up at corporations, campuses, shopping malls and airports.

But at a gas station?

A San Francisco Shell station has a robot as extra security for those at the pumps.

A robot serves as a security guard at a Shell Station at 8th and Market streets in San Francisco. The robot has four cameras, and rolls at 3 mph, about the same pace as a person walking. It continually scans and records. July 16, 2018

"I'm waiting for Robocop to come out anytime and say you're under arrest," joked customer Traci Lim, who was taking cell phone video of the robot as she filled up.

Lim and other patrons at the SoMa station are amused, perplexed and curious.

"What's that for anyway?" asked another customer, watching the dome shaped device spin and pace within a 6-7 foot space.

"I haven't seen it do anything but what it's doing right now, hiding, that's security I guess, " said customer Tommy Anderson, "not if it talks to you, says 'Hey how you doing, you're not supposed to be on this property, please move, then it would be doing something."

The robot has four cameras, each aimed a different direction, to capture multiple angles.

"If I see him bust somebody, tackle a shoplifter, then I'll be impressed," smiled customer Derrick Sorenson, "but until then, watching it spin in circles, I'm just scratching my head."

The high-tech crime stopper won't be chasing anyone down. Top speed is 3 mph, about the same pace as a person walking.

But it is continuously scanning and recording, in its pod-shaped shell, which is 3 feet wide, 5 feet tall, and weighs 400 pounds.