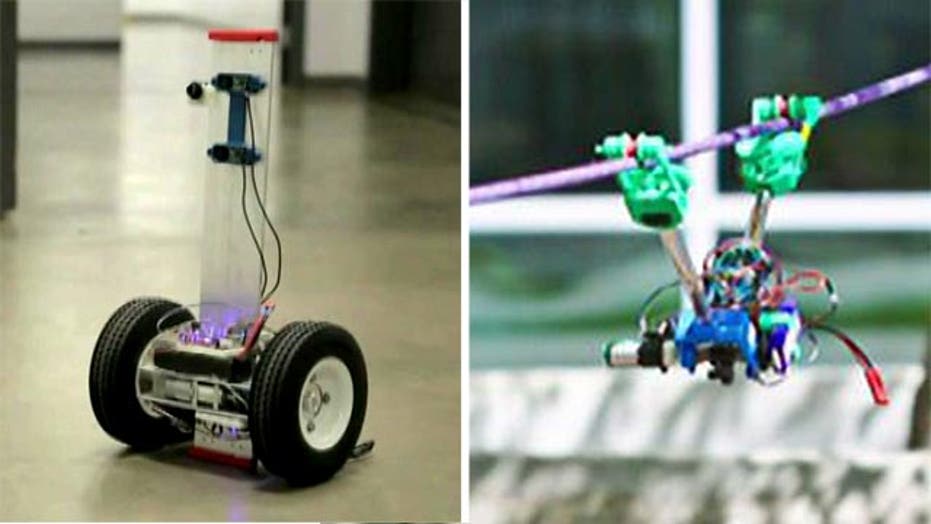 A new firefighting robot scout will create 3D virtual versions of fires giving those rushing into harm’s way a detailed picture before entering a burning building. The small Segway-like robotic vehicles use new image processing techniques and can be deployed to quickly explore, map and photograph and provide critical information on burning interiors.

While cruising around the scene, it builds a virtual reality picture that includes a 3D map and temperature data. It can even climb stairs and right itself if it falls over.

This little guy looks for fire victims while using a suite of sensors, including an infrared camera to record thermal data and two stereo RGB cameras, to build a detailed picture of the fire. On-board software then takes the information on dangerous volatile gases, temperatures and the building's structural integrity and loads it into the 3D map.

This sort of information could help firefighters assess the structure and better plan their intervention, whether it is tackling the fire or saving trapped individuals.

The San Diego Fire-Rescue Department has worked with engineers at the University of California, San Diego’s Coordinated Robotics Lab and the University of Illinois at Urbana-Champaign and corporate partners like the Brain Corporation to develop the robot.

Computer scientists have been working on how the robot can cope with smoky and partially obstructed spaces, while nanoengineers have been developing an “electronic nose” to detect and reveal volatile organic compounds.

Over at the University of Illinois, researchers have been working on how the robot can avoid obstacles and interact with humans.

Mechanical engineering professor Thomas Bewley, at UC San Diego, has already built the first vehicle prototype and the hope is that these robots will be provide agile, cheap assistance.

Ultimately, these robots could deploy individually or as a team to quickly provide a virtual reality version of burning buildings in near real time.

Is that a robot crawling along your power and phone lines?

With just your average off the shelf electronics and some bits of plastic, some smart engineers have created a new robot called the SkySweeper.

Designed to travel along utility lines in a sort of high wire act, this robot operates in the space between the UGV dominated ground robots and the air owned by drones.

SkySweeper’s mission? To search for damage and problems that require repairs.

Also created by mechanical engineers at University of California, San Diego, they say their robot could be produced for less than $1,000 a pop.

This little robot will be competing with two other large, complicated, expensive robots already deployed to inspect power lines.

Before travelling out to Asia, SkySweeper is competing in the Road to Maker Faire Challenge, a contest where winners can take their project to the World Maker Faire this September in New York. You can vote for Skysweeper from Aug. 6 to 13, 2013.

Sending up manned helicopters or robot helicopters using infrared imaging to inspect lines is another traditional alternative for utility companies.

SkySweeper is shaped like a V and its ends have clamps that open and close to move inch by inch down utility lines to search for damage.

This approach also allows it to swing past cable support points.

Designed by graduate student Nick Morozovsky , SkySweeper will make its debut at the International Conference on Intelligent Robots and Systems in Tokyo this Autumn.

Going forward the SkySweeper could be equipped with a camera to transmit images and induction coils that would allow the robot to deploy for months at a time by harvesting energy from the power lines it is crawling.