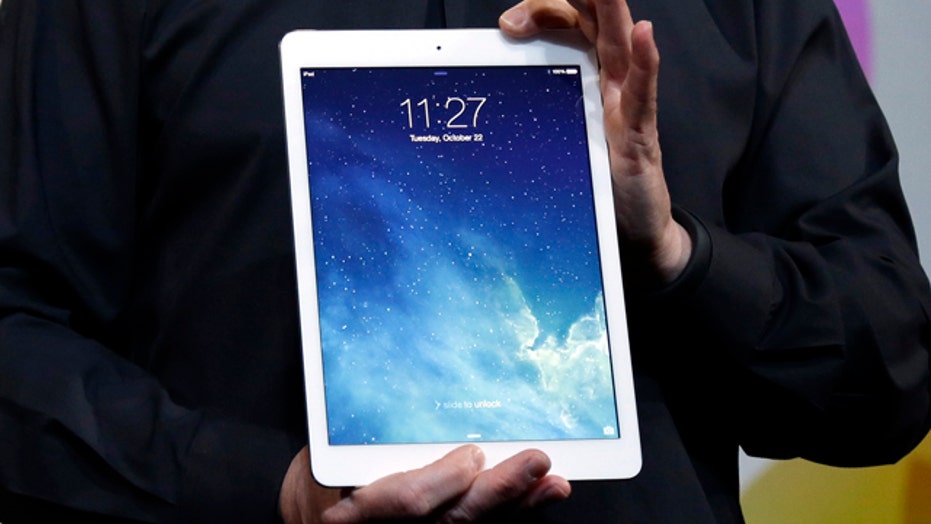 Until now, size wasn't the deciding factor between the full-size Apple iPad Air and the iPad mini. There were marked differences between the two such as size, weight, speed and quality of display.

But the latest generation of tablets from Apple -- the iPad Air goes on sale this Friday, the Mini shortly thereafter -- are both best in class: same speed, same camera same ultrahigh definition Retina display. So when you're deciding between the two … size makes all the difference.

In my house, the kids are the real gadget testers. Since they take over any tablet or phone I bring home, we joined forces to put the new Air through the Morris Family paces for the last week.

In my house, the kids are the real gadget testers.

At 1 pound, the new iPad Air is impressively light, barely heavier than the iPad mini. My toddler can waddle around the house with it a lot more easily, and I can now use it in bed without worrying that it will smack me in the forehead if I doze off while reading Frank Miller’s "The Dark Knight Returns." Which has been known to happen with the previous generation iPad.

Battery life is an important feature in my house. My children like to play Wood Puzzles HD and then leave the game on for the music as background noise while they play. And I leave the house at 3:30 a.m. for FOX & Friends, iPad in tow, so I need it to last me all day. Like previous generations, the Air does just fine on this count.

Yet the Air is now a lot thinner -- 20 percent thinner than the previous generation, to be exact. It's great for travel in my own backpack, as well as in the diaper bag. You barely notice it’s there.

The Retina display does not fail to impress. I found it all the more impressive given my recent Lasik eye surgery. The screen resolution is crystal clear. Apple reduced the bezel around the sides to give the appearance of more "screen" even though the viewing area remains the same as last year’s iPad.

Taking aim at both Google and Microsoft, Apple’s throwing in a bunch of free software when you buy the new iPad. iPhoto, iMovie, GarageBand, Pages, Numbers and Keynote are all now free. Microsoft still doesn’t offer Office for the iPad, you’ll have to buy a Surface tablet if you want it. Microsoft clearly missed the boat on this one.

My biggest disappointment with the Pad Air is the lack of Touch ID, Apple’s fingerprint sensor. Once you use it you’ll never want to peck out a passcode again. I see Touch ID as one of the most important technological breakthroughs of 2013. It’s both a testament to how well it works on the iPhone 5s and how difficult the technology was to pull off for one product, let alone two different iPad sizes. Apple sells millions more iPhones than they do iPads, so it’s no wonder Touch ID didn’t make it onto the tablets. Still, I’m disappointed.

And now to the two questions I’ve already received the most: Should I upgrade if I have an older iPad? Should I get the iPad Air or the smaller iPad Mini? Lets take one at a time.

Should you upgrade? Well that depends on which iPad you’ve got. Existing iPad owners can upgrade to iOS 7, the latest mobile operating system that the iPad Air runs. And this is a great operating system! It makes older iPads and iPhones seem new. But if you’ve been itching for a Retina display or find your older iPad really breaking your back, this is the upgrade for you.

Should you choose the Air or the Mini? Once again, it all boils down to size. They have the same storage capacity, the same speed processor, the same operating system. So do you like 'em big? That’s a personal question I really can’t help you with.