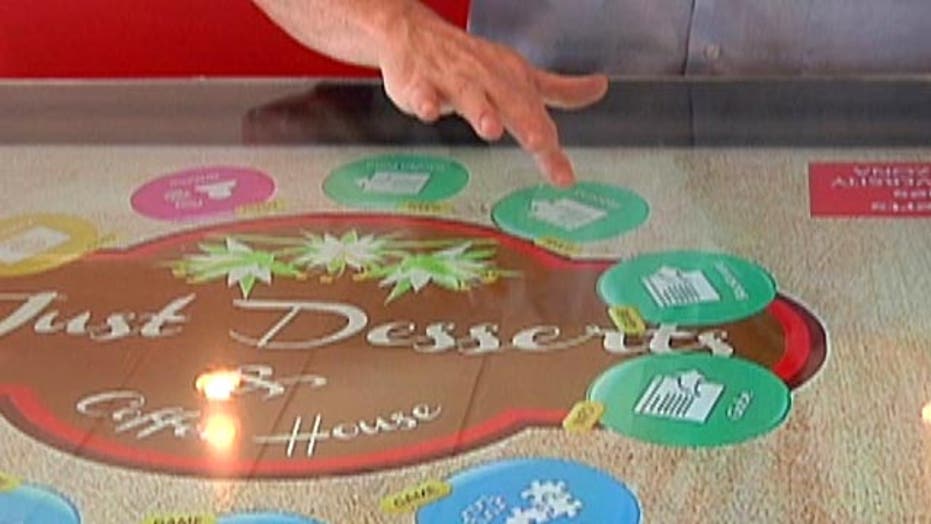 A Tucson restaurant is using technology to combine fun and games with service. Fox's Aalia Shaheed shows you how the 'smart table' could be the new face of the service industry.

At Just Desserts and Coffee House in Tucson, Arizona, innovation is making a table so smart it could be the new face of the service industry.

They're called ‘smart tables’- touchscreen tabletops that you can play with as you dine.

Dan Collins, a software engineer, designed the tables for his wife’s restaurant. Each surface embeds a Windows based computer with HDMI digital output.

"You name it, we have it. Every kind of interaction game you can think of," said Collins. "There's no other place that I know of that this kind of technology exists in a restaurant environment."

The tables are manufactured locally in Tucson, but the parts are outsourced. Each one costs between $3,000 and $5,000 to produce. They are Internet and cable TV ready, giving customers a wide array of activities to choose from.

And you don't have to worry about spilling your drink - the surfaces can handle accidents.

But the tables offer more to customers than just fun and games.

"We're instituting slowly an ordering system that allows people to order their food from the table," said Collins.

Customer Meseret Patterson was intrigued by the idea.

"They don't have to come and say ‘hey are you ready to order?’ every single time. You can just take your time and order whatever you want," said Patterson.

But some customers worried the personal element would be taken out of the dining experience.

“I do worry that it might be a little impersonal, but it’s good for business,” said customer Mikayla Patterson.

Collins says the human touch won’t be taken out of the restaurant.

“We’ll still have waitresses checking in on customers, and they can still order the traditional way if that’s what they’re comfortable with,” said Collins.

The system will help the restaurant cut down on labor costs as well, allowing them to hire less waitresses to check in on people.

"This is the wave of the future. You're starting to see tablets in other restaurants. But they're not fully integrated into their operation. Here we're going to fully integrate it into the operation," said Collins.