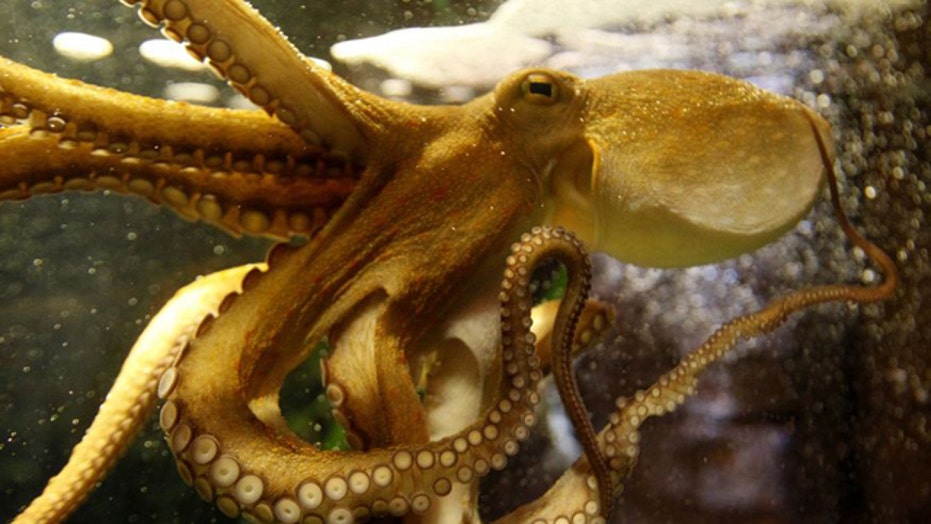 What can the military learn from an octopus? More effective camouflage techniques.

The octopus is a cephalopod, a class of marine animals that can change color quickly and its concealment method has inspired technology that automatically reads its surroundings and adapts to mimic them.

A new scientific study aims to turn the stuff of science fiction into reality for the Office of Naval Research. And it could lead to more advanced forms of camouflage for the military.

A high-tech material was created by researchers at the University of Houston, University of Illinois at Urbana-Champaign, the Marine Biological Laboratory at Woods Hole, Mass., Northwestern University and Brown University.

The team published their finding this week in the Proceedings of the National Academy of Sciences.

This team’s adaptive camouflage system uses thermochromatic material to read the environment. Essentially, it “sees” color and adapts to match it. Within only one to two seconds, the material can react and respond to changes in illumination in its surroundings.

The prototype works in black and white with shades of gray in between. Eventually, it could encompass the full color spectrum. Currently, the prototype is also less than an inch square, but this could easily be scaled up to a larger size.

The corners of these layers have tiny holes that allow light to get through. All three layers are flexible and their thickness is less than the width of two human hairs. These layers sit on a base of light sensing photodetectors. When light reaches the photoreceptors, they process how much color adaptation is needed and initiate color change to match the environment.

With all the layers working together, the material can change itself to match the color of its background to blend in.

How would the tech be applied?

The skin of the device is thin and flexible. When these thin sheets are wrapped onto a solid object, it would give the object the ability to adapt the visual appearance of its environment – like the octopus.

While the most valuable applications are for the defense industry and the military, it could also be used for consumer applications like wearable electronics and toys.

The race for invisibility

Invisibility, a capability that both civilians and the military would love to possess, has long been only possible in books and films. But camouflage is essential for military operations and improvements in camouflage are essential to saving more lives on battlefields.

The race to develop material that will self-reconfigure in response to external signals has been intense. And many teams, like this one, have turned to borrowing designs from nature as the solution to “invisibility.”

Nature has already cracked adaptive camouflage, so smart researchers have been reverse-engineering the systems found in different creatures for human applications.  Cephalopods are capable of active camouflage to a very sophisticated degree. Camouflage research on cephalopods has yielded some other key advances recently.

Last year, new biomimetic infared camouflage coating was created from another cephalopod, the squid. The research, conducted by a team at University of California Irvine, was inspired by the Loliginidae, better known as the calamari.

The team produced a structural protein called reflectin that is key to the squid's ability to change color and reflect light.

To mimic the squid skin, they used common bacteria to make optically active thin films. They achieved a version of squid camouflage skin that could disappear and reappear when seen through infared technology, which is widely used by the military.

The cuttlefish, called the "chameleon of the sea," is also a cephalopod like the octopus and squid. Blending in with its surroundings and avoiding predators, it quickly adapts both the pattern and color of its skin.

Earlier this year, researchers at Harvard University and the Marine Biological Laboratory made a breakthrough in understanding the cuttlefish’s natural nanoscale photonic device.

It was already understood that pigmented organs called chromatophores allow it to change its appearance in response to visual cues. But until this new research, it was not entirely understood how this adaptive coloration was possible.

In addition to the chromaphore, the cuttlefish uses a stack of two other optical components to adapt its color to its environment.  The leucophore is a highly sophisticated light scatterer that reflects light uniformly over the entire visible spectrum, while the iridophore, with its thin film layers, acts as a reflector.

Taken together, these allow the cuttlefish skin to selectively absorb or reflect light of different colors. It is hoped that this increased knowledge of how a small marine creature effectively camouflages will lead to more advanced camouflage for warfighters.