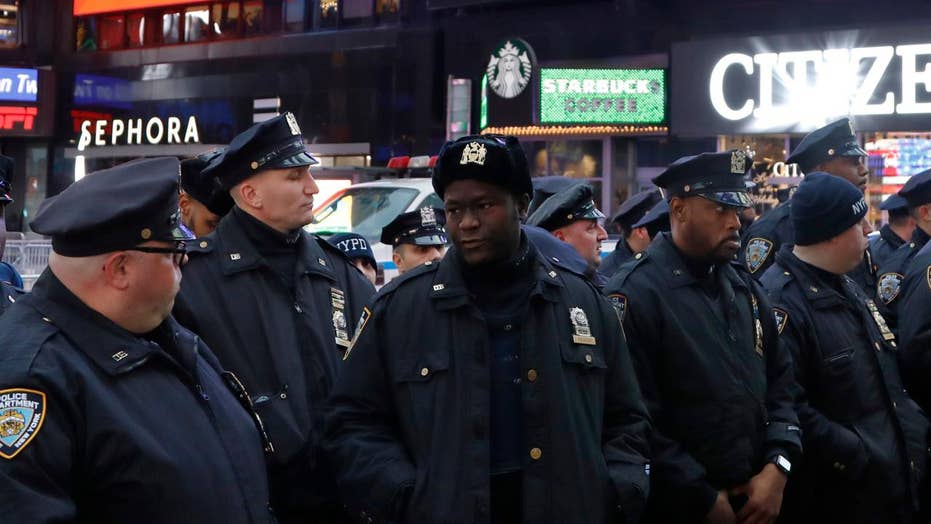 New York City Police are scrapping plans to deploy a drone to keep watch over the New Year’s Eve crowd in Times Square for the first time.

Monday’s damp weather is to blame.

Chief Terence Monahan said on Twitter: “The safety of all those celebrating #NewYearsEve in #TimesSqaure is paramount. Due to the rain and wind tonight, our NYPD drones will NOT be in the air.”

This year, the temperature will be in the high 40s, but rain is expected to linger into the first few hours of 2019.

This year, the ball is a 12-foot diameter geodesic sphere covered with 2,688 Waterford crystal triangles lit by 32,256 LEDs. The numerals “2019” will burst into light at midnight accompanied by pyrotechnics and the release of 3,000 pounds of confetti.

A rainy New Year’s Eve in New York has some Times Square revelers ponying up to keep dry, while police are scrapping plans to deploy a drone to keep watch over the crowd for the first time. (NYPD)

Justine Brenkel, 26, from Lyon, France, said being in Times Square on New Year’s Eve was on her “bucket list.” ‘‘It’s unique. It’s magic. It’s New York,” she said — but the hours of waiting were turning it into a bit of a disappointment.

As has been the case for years, the celebration is taking place under tight security, with partygoers being searched for weapons at checkpoints and herded into pens, ringed by metal barricades, where they wait for the stroke of midnight.

“It seemed like airport security,” said Lisa Carron, a 39-year-old preschool teacher from Ontario. “That should keep us safe.”

THE TOP POLITICAL UPSETS OF 2018

Thousands of police officers will be on hand to provide security, with the help of bomb-sniffing dogs, 1,225 security cameras and 235 “blocker vehicles” used to stop any potential vehicle attacks. Police had planned to send up a drone to keep an eye on the festivities, but officials scrapped that idea because of the rain.

People arriving early enough to grab a standing spot in Times Square itself may have a good view of the stages where the entertainers perform. The rest of the throngs, stuffed into pens stretching several blocks north toward Central Park, will be able to follow the action on viewing screens.

There are no public toilets in the pens, backpacks are banned and there are no garbage cans either, so picnicking for the event can be rough. But revelers will have plenty of companionship, though experts say probably well short of the 1 million to 2 million spectators claimed by city officials and organizers.