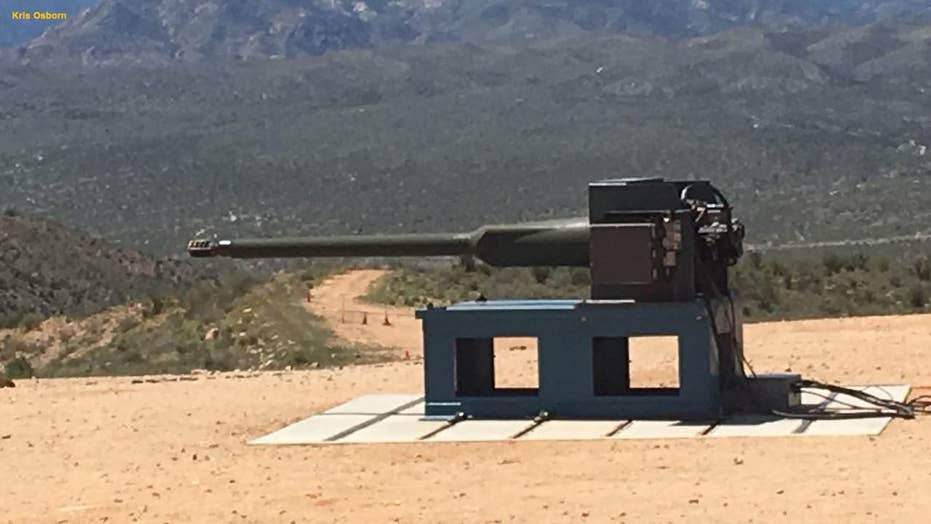 Watch: Army’s new 50mm cannon destroys a mock enemy target from hundreds of yards away in a live-fire demo.

(Kingman, Ariz.) As a small ball of fire shot out of the end of a new 50mm cannon, a cloud of smoke filled the air and, in what seemed like less than one second, an explosion of smoke and fire destroyed a mock enemy target from hundreds of yards away -- on the other side of an Arizona desert valley.

The explosion was precise, burning and shattering a metal target in successive shots of three to five rounds. This blast effect, weapons developers explain, is precisely the intent for the Army’s new 50mm weapon – to bring a longer-range, more-lethal measure of firepower to medium caliber armored vehicle attack.

The live-fire demonstration, taking place at Northrop Grumman’s 2019 Bushmaster User Conference in Kingman, Ariz., was designed to further prepare the weapon for integration onto armored vehicles and, ultimately, send the new cannon to war. Military representatives from the US and as many as 25 partner nations gathered to see the live-fire demo, which included a host of armored-vehicle weapons and technologies - such as the 50mm cannon.

The cannon attack was part of a live-fire demonstration intended to move the 50mm Bushmaster cannon closer to integration onto a turret and Army armored combat vehicle -- to include the service’s now-in-development Next-Generation Combat Vehicle slated to emerge in the mid-2020s.

According to Northrop information, the new 50mm cannon, referred to as the experimental XM913, can hit ranges more than twice as far as the roughly 2-kilometer range of the Bradley Fighting Vehicle’s existing M242 25mm cannon. “Dozens of countries have either parity or overmatch to the Bradley Fighting Vehicle’s M242,” a Northrop statement says. The 50mm is being engineered to address this potential disparity, by hitting ranges well over 4km.

The evolution of Chain Gun attack technology has gone through several significant steps. The Apache 30mm gun, called the M230, provides an initial technological foundation from which subsequent land-fire applications have emerged – such as the existing vehicle-mounted 30mm Bushmaster Chain Gun and the new 50mm Chain Gun, or cannon. A Chain Gun is described as a type of auto-cannon that uses “an external source of power to cycle the weapon rather than diverting energy from the cartridge,” using a continuous loop.

The 50mm cannon incorporates adaptations of the original Apache 30mm Chain Gun technology, which fires a fast-paced belt of “linked” ammunition. While equipped with targeting technology for individual targets, the Apache 30mm can often be used as somewhat of an “area” weapon to blanket an area with dispersed, mobile rapid-fire attack. Such a tactic can both lay down suppressive fire, enabling ground troops to maneuver or itself directly destroy small, moving ground targets.

SUBMARINE SURGE: WHY THE NAVY PLANS 32 NEW ATTACK SUBS BY 2034

The new 50mm evolves Chain Gun systems and makes use of a “linkless” ammunition technology. This can slow down the pace of fire, from 600 to 200 shots per minute in some cases, bringing precision and higher levels of destruction upon heavier enemy targets, Brown explained.

“This is an adaptation of the historic Bushmaster. With Chain Gun ammo you traditionally have a link belt….now we have ammo boxes that feed the ammunition,” John McCollum, Northrop’s Director of Business Development, Bushmaster Cannons, told Warrior Maven in an interview.

In development for roughly eight years, the 50mm cannon represents a new technical effort to engineer what might be called a “middle ground” kind of attack cannon; it must not only bring more firepower, range, precision and lethality to armored combat but also integrate into the kinds of expeditionary future armored vehicles sought after by the Army. In effect, the new cannon represents a new sphere of attack options, lodging itself as a new attack option positioned between a 30mm chain gun such as that fired by the Stryker -- and a heavier 120mm cannon fired by an Abrams tank.

Therefore, the new 50mm canon aligns with the Army future armored combat vehicle strategy which aims to both harness the lethality and survivability afforded by new technologies, yet merge it with unprecedented levels of maneuverability, speed and deployability.

This strategic emphasis, involving a conceptual and technical balancing act, was explained by Maj. Gen. Brian Cummings, Program Executive Officer, Ground Combat Systems, in an interview with Warrior Maven a few months ago. The NGCV is being built to be upgradeable so as to accommodate new technologies as they emerge to increase firepower and targeting while also lowering weight and increasing combat mobility. The NGCV, Cummings explained, is being engineered with this particular challenge in mind so that it can quickly be ready for near-term fights and also prepare for the “war after next,” as he put it. The idea is to embrace a developmental trajectory designed to optimize continued technological innovation when it comes to achieving an ideal balance between survivability and mobility.

The challenge of merging advanced survivability with battlefield maneuverability has been a central focus for Army developers. To some extent, its success hinges upon a host of “still in development" technologies, Army program managers say. Some of these include lighter-weight armor composites offering the same or improved protection as current heavy vehicles as well as sophisticated networking, computer processing and integrated long-range sensors. The 50mm, developers explained, is engineered to integrate with these kinds of systems.

Other technologies expected to integrate with the 50mm include Active Protection Systems and various iterations of AI and EW tactics designed to jam or disable enemy communications and incoming weapons. The Army’s new NGCV is also called an “optionally manned vehicle,” a designation which raises the possibility of having a forward-positioned lethal armored vehicle able to conduct attack and reconnaissance missions without placing human crews at risk. In this scenario, fast, lighter-weight vehicles – armed with substantial firepower such as a 50mm cannon – could bring a new level of attack possibilities.

Interestingly, the challenge of merging mobility with protection and integrated sensors is taken up in a 2017 essay in the Defence Science Journal.

The essay, called “Armored Fighting Vehicles – Future Perspective.” refers to future armored vehicle design as “a great challenge, considering the emergence of various new technologies and the need to effectively integrate it in the vehicle. A priori configuration model to evaluate the tactical mobility, and protection requirements with respect to weight and volume of various systems can lead to a compact fighting vehicle.”

The essay, it seems clear, refers to the difficult task of maximizing firepower on what may need to be a smaller vehicle able to achieve the requisite amount of maneuverability, high-tech computing, sensor integration and speed. This goal of blending seemingly contradictory attributes, without compromising survivability, is exactly what the Army has in mind.

The new 50mm specifically built to help address this challenge by seeking to optimize massive firepower with the kind of expeditionary vehicle envisioned for the NGCV. The need, according to Army developers, is to engineer armored combat vehicles faster and more easily deployable than large platforms like an Abrams tank, which can at times have mobility limitations due to its weight. A 70-ton Abrams, for instance, may have trouble crossing certain bridges or keeping pace with some fast moving infantry units.

Perhaps of greatest significance, the 50mm adds a new suite of more lethal ammunition options, bringing a vastly increased envelope of combat effects. The new gun has a full suite of ammunition, including high-explosive rounds, airburst rounds and armor-piercing rounds; it is the same as the current 30 173 rounds fired by the Stryker, yet with additional “reach and lethality.” The ammunition, a major emphasis of the 50mm’s developmental trajectory, will include both “airburst” ammunition and a “proximity” fuse.

“When the ammunition technology roadmap is complete, we hope to bring proximity fusing to the weapon...and potentially guide the ammunition …. which will let us get out to some extended ranges and hit targets you typically cannot hit with direct fire systems,” Dan Olson vice president of Northrop Grumman’s Armament Systems Business Unit, told Warrior Maven in an interview.

A proximity fuse, for instance, is an existing technology now being adapted to the 50mm, Northrop weapons developers say; it will enable a round to explode in the area of a target instead of attacking in a more narrow or linear way. This kind of blast effect brings a possibility to disperse lethal, explosive materials across a wider area and destroy different kinds of targets such as groups of on-the-move enemy fighters.

Olson explained that the 50mm, in combination with its airburst rounds, will bring a new ability to destroy targets in “defilade” or otherwise not observable to attackers due to an obstruction such as a rock or wall. By exploding at a predetermined point above or near the intended target, airburst rounds disperse lethal explosive material such that it can destroy an enemy hiding behind a rock. While airburst rounds already exist, and can, for instance, be fired from a Stryker-mounted 30mm gun, the Army and Northrop are adapting the technology to the 50mm.

The existing 30mm cannon can not only arm the Stryker, but lightweight variants can also mount onto thinner-skinned vehicles such as a Humvee or even a pick-up truck. This 50mm cannon lethality effect, as described by Olson, goes beyond this through use of a larger cannon and warhead able to destroy heavier targets.

Significantly, multiple ammunition effects for the new 50mm cannon exist within the same, single form factor – size, shape and general configuration – bringing several attack options into a single size round. This advantage was anticipated in another chapter of the Defence Science Journal essay, which states “it is to be noted that as the variety in ammunition increases due to mission requirements, the dimensions need to be same to achieve uniformity in configuration.”

This emphasis upon ammunition configuration is quite significant, according to Northrop information, which explains that the Bradley’s current 25mm round is “not conducive for the development of advanced ammunition, including “Proximity Sensing ammunition.”

Following some additional live-fire testing to refine some of the mechanics for the weapon, the Army and Northrop plan to work with turret manufacturers to mount the weapon onto armored fighting vehicles for further development. McCollum said that the gun, as a heavier variant of the known Bushmaster chain gun family, should not be too difficult to integrate.