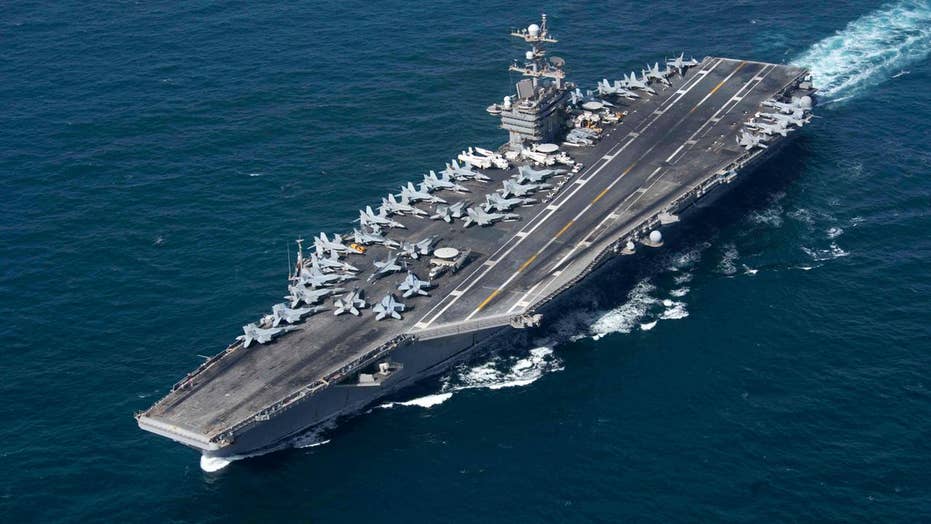 In order to be better prepared for massive open-water warfare against enemies with sophisticated surface, air and undersea attack weapons, the U.S. Navy is putting a push on further weaponizing its fleet of aircraft carriers, while evaluating its plan to expand the number of carriers in the fleet to 12 Ford-class carriers. In short, the Navy wants more weapons on carriers and may simply want more carriers, faster.

Threats from long-range guided missiles, surface ship fire-power, submarine-launched torpedo attacks and incoming air assaults all inform the Navy’s vigorous push to further weaponize its fleet of aircraft carriers - while assessing its plan to expand its number of carriers up to 12.

The service is putting carrier-development and weapons modernization on the fast-track, indicating confidence in the carrier platforms combat survivability in coming decades as it shifts focus to blue-water warfare against technologically sophisticated adversaries.

The Navy approach is defined by two interwoven trajectories; the service is performing “sea-based developmental testing” of carrier-based offensive and defensive weapons -- while also hoping to speed up acquisition of Ford-class carriers through two-ship buys and long-term fleet goals. In short, the Navy wants more weapons on carriers and may simply want more carriers - faster. The hope, according to formal Navy studies as of 2016, is to grow the fleet to 12 aircraft carriers, moving beyond its current size of 11.

“The requirement remains 12 CVNs per the 2016 Force Structure Assessment (FSA) and is still supported by the FORD class new-construction plan. An FSA will be completed in 2019 to reassess that requirement,” Lt. Cmdr. Kevin Chambers told Warrior Maven.

The new FSA mentioned by Chambers, it seems possible, could wind up reducing the Navy's force structure requirements for carriers.

Regardless of whether the acquisition effort will ultimately sustain the goal of 12 carriers, the development plan will still involve testing and refining carrier weapons systems to ensure the platforms are best prepared for massive open-water warfare against enemies with sophisticated surface, air and undersea attack weapons.

Reaching 12, however, is not without challenges. Current plans to retire as many as three existing Nimitz-class carriers in coming years means new Ford-class ships might not be added fast enough - unless there is a way to move faster. While the Navy’s 2020 budget request does add roughly $1 billion more for Ford-class carriers over last year, coming in around $2.6 billion - realistically hitting 12 carriers appears difficult. In fact, it appears the pace of Nimitz-class carrier retirements may be increasing, amid plans to retire the USS Truman earlier than planned. The Navy's plan, released with its budget proposes to retire carriers in 2024, 2025 and 2027. This pace puts the Navy fleet at 10 carriers in 2030. These plans raise the question as to whether the Navy's longer-term intention is, in fact, to operate 12 carriers. Is this still the goal? Quite possibly.

The Congressional Research Service report on carriers assesses the challenge this way:

“Procuring carriers on 3-year centers—that is, procuring one carrier every three years—would achieve a 12-carrier force on a sustained basis by about 2030, unless the service lives of one or more existing carriers were substantially extended,” the report says.

Extending this pace even slightly more to 4-year cycles would prevent the Navy from hitting its 12-carrier force until as far out as 2063, the report states.

By this calculation, much more activity is required for the service to approach its goal in the near term, meaning within the next decade. Chambers did add that the Navy’s fleet expansion is on the fast track, per the services’ 30-year Shipbuilding Plan.

“Battle force inventory reaches 301 in 2020 and 355 in 2034,” Chambers said. Yet the pace of expansion includes adding many Littoral Combat Ships, Attack Submarines and Destroyers, among other things.

Also, while hitting 12 within 10 years may be difficult, it does not seem entirely impossible. Some existing Nimitz-class carriers could be extended, as mentioned by the CRS report, additional Congressional funding and industrial base adjustments could materialize and a collective will to better respond to global combatant commander requirements could strengthen in light of major global threats.

Why might the Navy need 12 carriers? Navy leaders have been making the case, yet it may be that mission requirements will allow the missions to be met with fewer carriers.

A first and foremost reason for more carriers, it would seem appropriate, is readiness. Should conflict quickly emerge in various global hotspots, or in unanticipated areas, forward-positioned Carrier Air Wing attack makes power projection much faster and more effective. It brings an advantage of strike proximity in the event that land-launch bases are not immediately within striking range. Also, as mobile attack platforms, carriers can maneuver into positions of strategic advantage, should new intelligence information change the equation. Furthermore, by bringing massive attack possibilities to areas of tactical relevance, carriers can provide a kind of "back up" attack protection to forward operating assets such as drones and surveillance planes. Should an adversary be aware of US carriers in striking range, they might be less inclined to risk confrontation by attacking US assets, such as US bases or surveillance planes. In effect, carriers are deterrents.

Secondly, apart from the expected need for warfare preparedness, carriers are essential to maintaining secure and open global waterways. Much of the Navy's mission, as articulated by senior leaders over the years, involves forward-positioning combat power to ensure safe passage for free trade, friendly travel and international business. US carriers can, in this respect, also perform counterterrorism missions and prevent piracy. Given all these variables, many senior Navy leaders have, for quite some time now, been of the view that current global mission demands simply exceed the amount of available carrier capacity.

Perhaps with all of this in mind, the Navy is now reforming its carrier-acquisition strategy. Instead of stove-piping or separating purchases for its next two carriers, the Navy awarded a contract to Huntington Ingalls Industries to build both the future USS Enterprise (CVN 80) and the as-of-yet unnamed fourth Ford-class carrier - CVN 81. It seems self-evident that a 2-carrier block buy could expedite a more aggressive carrier acquisition strategy, should that be put into effect. At very least, it does seem to make hitting more carriers faster more possible.

At the same time, the primary goal - according to Navy developers - is to save as much as $4 billion dollars with the block buy.

All of this aligns with the Navy’s current push to make carriers more combat capable. This strategy appears to have a few possible dimensions. While carriers typically operate in Carrier Strike Groups surrounded by cruisers, destroyers and other warships able to provide protection, a fast-changing threat environment is expected to create the need for more dispersed, or disaggregated operations -- requiring carriers themselves to operate with more integrated offensive and defensive weapons systems.

As part of the 2-carrier block buy, the Navy is also streamlining war-technology developments regarding how a carrier hosts its F-35C, Mk 38 gun system and MQ-25 Stingray drones, a Navy statement writes.

These modifications to the carriers themselves, described by Navy statements as “lethality” enhancing measures, include the planned addition of torpedo defense systems, interceptor missiles and the introduction of greatly impactful platforms such as the F-35C and MQ-25 Stingray.

In short, carriers will need greater attack and defensive technology themselves. For this reason, the service is not only looking to accelerate the arrival of the F-35C and drone tanker, but also bring new weapons such as lasers, guns, electronic warfare and new interceptor-defense systems.

All of this pertains to a much-discussed phenomenon characterizing Navy carriers for quite some time - namely that longer-range anti-ship missiles, drone attacks, EW and laser threats from potential adversaries change the equation regarding where carriers may need to operate. Many now cite new weapons, such as the Chinese DF-21 or DF-26 anti-ship missile reportedly able to travel up to 900 miles, as missiles likely to change the manner in which carriers will need to function.

A 2011 Navy War College Review essay, written when these Chinese anti-ship missiles were earlier along in their development, interestingly seems to anticipate this problem. The essay, called “The Future of Aircraft Carriers” by Robert Rubel, describes the DF-21D this as “fitted with a maneuvering reentry head that has an anti-ship seeker built into it. The purpose of this missile is thought to be not so much to sink the carrier as to achieve a “mission kill,” causing fires and damage to the air wing and topside structures.”

However, the essay also introduces reasons why the much-hyped Chinese weapons might themselves be vulnerable or at very least countered by a wide range of carrier weapons and countermeasures. Writing before the maturation of some current and emerging ship-defense technologies, Rubel makes the point that DF-21D could be vulnerable to “jamming” through electronic warfare or other means such as “decoys.”

Also, perhaps of greatest significance, the Naval War College Review paper seems ahead of the curve in that it mentions how well-targeted defensive laser systems could be used to thwart, counteract or even destroy approaching anti-ship missiles. The author appears to have foreseen some upcoming advances with lasers which, at the time of the essay in 2011, may have been in purely conceptual phases or very early development. Laser weapons have now matured considerably, to the point where some are already deployed on Navy ships. Also, the Navy is now making rapid progress preparing and testing laser weapons for destroyer, carriers and other ships.

Carrier defenses and attack weapons are taking on added importance due to the reality that, with the emergence of new Chinese and Russian fighters such as the Su-27, US aircraft can no longer assume air supremacy.

“New generations of fighters, notably the Su-27, its derivatives, and even newer designs from Russia and China, have eroded the technical advantages traditionally enjoyed by American aircraft,” the Naval War College Review writes.

Enhancing the effectiveness of a carrier-launched unmanned aerial refueler, such as the Navy’s MQ-25 Stingray, introduces an unprecedented tactical advantage specifically able to address the carrier “operating range” issue. An ability to refuel while in flight massively extends a carrier's attempt to further project power while remaining at safer stand-off distances. If the combat radius of an F-18 or F-35, on one fuel tank, reaches 300 to 400 miles or so, the aircraft will have to turn around at a certain distance from its carrier. However, if an attack platform can double that range, it can naturally travel much farther, enabling much more “dwell time” when it comes to attacks and provide the option to strike targets farther inland or from greater distances.

“Unmanned aircraft offer double or triple the range and endurance of manned aircraft. Moreover, without the need to accommodate a human, their form can be considerably more stealthy, and their operations do not need to take into account crew-rest factors, at least to the extent that they do in manned aircraft,” Rubel writes.

In effect, unmanned systems and drone refuelers such as the MQ-25 might enable carriers to successfully project power, while operating outside the hit-ranges of Chinese anti-ship missiles.

The F-35C, naturally, will bring a new array of attack options for the Carrier Air Wing, not to mention an unprecedented measure of aerial Intelligence, Reconnaissance and Surveillance (ISR). Drawing upon new sensor and targeting technology, the aerial attack range will be significantly changed, and stealth technology will enable air attack to operate in higher threat environments, such as areas containing advanced air-defenses. The arrival of the F-35C is, by all estimations, expected to change the paradigm for carrier-air attack.

Perhaps with this in mind, the Navy’s 2020 budget request asks to nearly double the amount of F-35Cs from 9 up to 16.