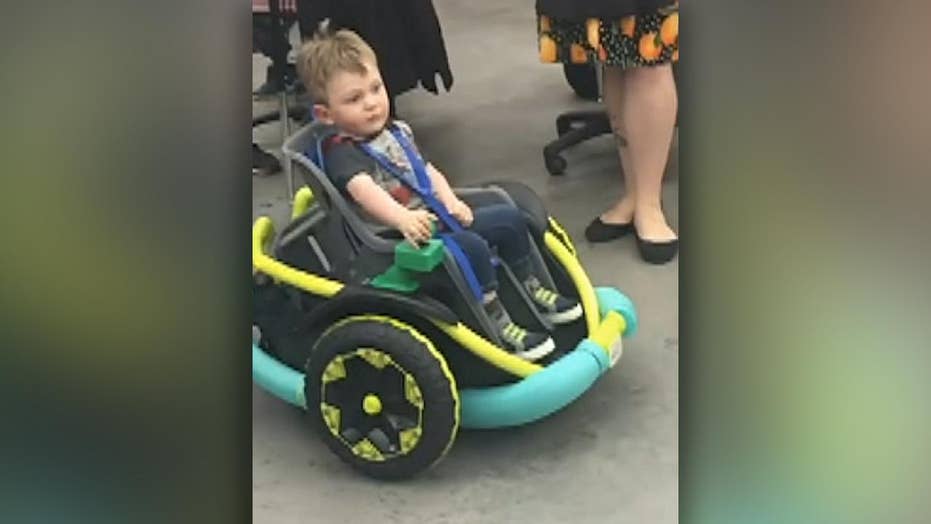 File video: Students from the robotics team at Farmington High School in Minnesota build a new power wheelchair for a 2-year-old boy whose parents couldn't afford him one. Courtesy of&nbsp;Rogue Robotics – Farmington.

An innovative high school robotics team from Minnesota constructed an electric wheelchair for a 2-year-old boy whose family couldn’t afford to purchase similar ones valued around $20,000.

“He has an especially hard time controlling his body. He has a lot of symptoms you’d see in someone who has cerebral palsy,” Cillian's father, Tyler, told KARE.

Coach Spencer Elvebak said his students jumped at the chance to help the toddler. The high schoolers designed a functioning power wheelchair to meet Cillian’s unique needs by replacing the electrical components of a Power Wheels riding toy, installing a seat from a child bicycle carrier and assembling a joystick with a 3D printer.

The University of Delaware’s Go Baby Go program, a group that creates mobility devices for disabled children, also provided some technical assistance along the way. However, the students mostly relied on their expertise building competitive robots to create the two-year-old’s sweet ride.

"I would say [it took] a couple of weeks working after school," Elvebak told CBS News. "The GoBabyGo program gave us some great resources to use, but we did have to make quite a few customizations to accommodate for Cillian's specific needs."

Tyler Jackson, who previously attended Farmington High School himself, reached out to the robotics team when he realized insurance probably wouldn’t approve Cillian for a wheelchair because he still lacks some of the maturity and focus to drive an electric wheelchair in a public setting.

Since the family couldn’t afford an electronic wheelchair priced around $20,000 in the meantime, the robotics team’s creation allows Cillian “to keep working on that proficiency while simultaneously being able to explore on his own to help with his cognitive development," Told told KARE.

“These kids took time out of their busy schedules to do this for our son,” Cillian’s mother, Krissy Jackson, said. “We’re so grateful.”

The Jackson family stopped by Farmington High School last week, about four months after the robotic team gave Cillian his custom electric wheelchair for Christmas. Cillian was laughing and smiling as he drove his hand-built wheelchair around the room.

“I think we won here more than we do in our competitions,” team member Nicole Cash said.