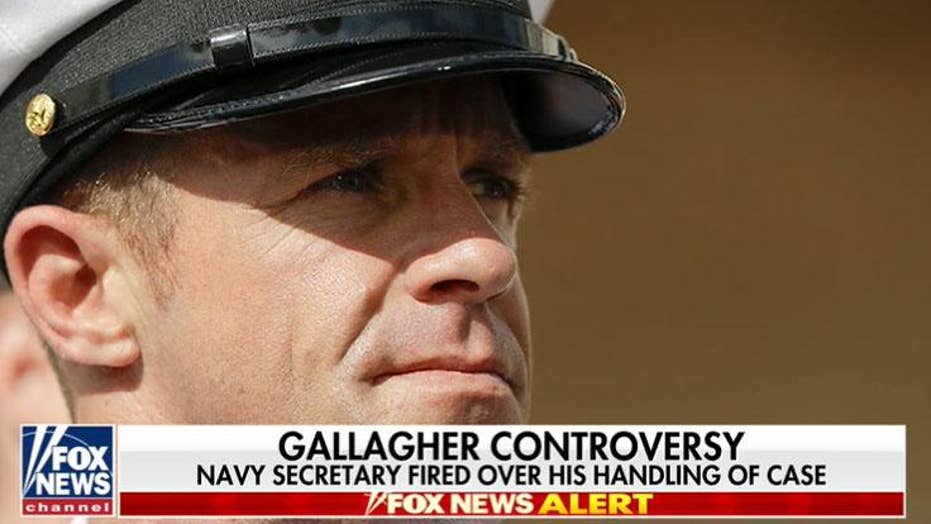 General Jack Keane discusses if Eddie Gallagher has exposed problems within our military justice system, or if this case is the exception to the rule

Conan, a Belgian Malinois that played a starring role in the raid, was honored by President Trump at the White House on Monday.  The dog was injured when it was exposed to electric wires in the late October raid while chasing al-Baghdadi at the terrorist’s compound in northwest Syria.

In addition to the obvious dangers they face, military working dogs are at risk of temporary and permanent hearing loss as a result of their role. Whether in training, during transport such as helicopter flights, or in actual operations, the dogs can be exposed to “high-decibel noise,” according to an Army statement.

In an attempt to solve this problem, an Army small business innovation program has developed new gear designed to protect the ears of military dogs.

“The CAPS uses lightweight, high-quality acoustic absorption materials to block unwanted sounds,” said the Combat Capabilities Development Command (CCDC) Army Research Laboratory in a statement. “Unlike conventional canine hearing protection, this solution is constructed of flexible materials that conform to the unique shape of a dog's head. This flexibility ensures proper sealing around the ear and maximum sound reduction.”

The system is designed to protect dogs from "high-decibel noise" in training, transport and operations. (Photo Credit: Courtesy Zeteo Tech)

The system uses snood-style headgear to uniformly distribute the pressure needed to keep the hearing protection in place.

“At a little more than an inch thick, the device's low profile will not be a hindrance for dogs working in tight spaces,” the CDDC Army Research Laboratory said. “It is also compatible with other gear used by working dogs, such as goggles.”

“Even a short helicopter flight can affect a dog's hearing, resulting in impaired performance and inability to hear the handler's commands, which can hinder the mission," said Stephen Lee, Ph.D., senior scientist at the Army Research Office, in the statement. "This new technology protects the canine while on missions and can extend the dog's working life."