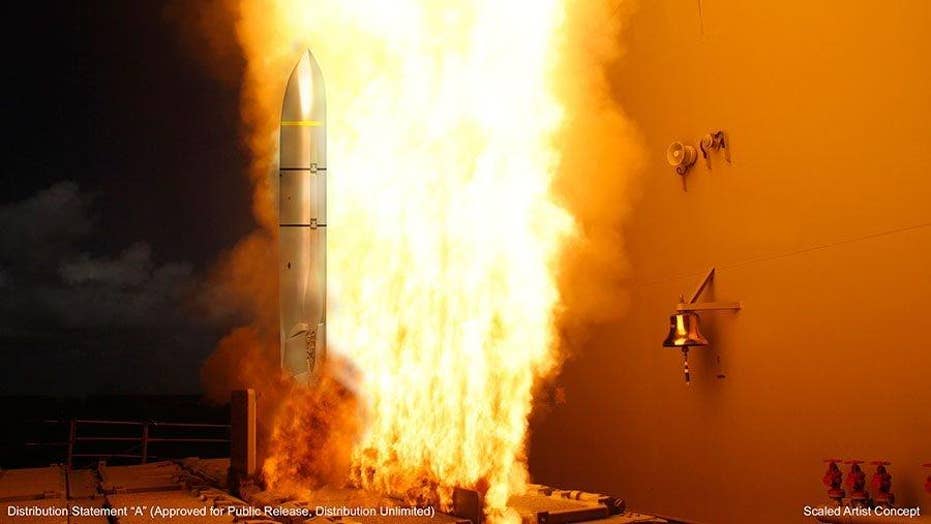 Stronger, faster and technologically smarter, here’s a look at Long range anti surface missiles. These “super” missiles can be fired from the air or sea and is poised to deliver far more damage.

Enemies of the United States will soon have to face a new devastating missile in the nation’s arsenal - a destroyer of enemy warships.

This new missile can penetrate deep into enemy space to sink their warships. Loaded with tech to make it “smart,” it both detects and destroys targets. An enemy could try to unleash electronic warfare to protect their warships, but these unstoppable missiles will still strike and destroy.

The Long Range Anti-Surface Missile (LRASM) is a missile that takes firepower in naval battles to a whole other level. In future naval encounters, the U.S. military can unleash LRASMs to strike enemy warships from both the air and the sea.

Stealth bombers, fighter jets and destroyers will deliver more than 1,000 pounds of explosive, destructive power to the deck of an enemy warship.

DARPA and the U.S. Navy funded the LRASM concept. Ultimately, Lockheed Martin won the contract to provide the LRASMs with their state-of-the art design.

LRASM detects a threat, identifies it, tracks the moving enemy warship and then precisely strikes with devastating power. With its advanced tech, it can even zero in on a specific ship within a group of ships, steadfastly undeterred by the enemy’s electronic warfare capabilities.

Missile closes in on its target during a test (Lockheed Martin)

Russia and China have armed their navies to the teeth – fully loaded to attack U.S. forces if ordered to do so.

But with the LRASM, the destructive power, range and precision of U.S. missile strikes in future naval battles will be significantly ramped up – no navy on Earth would want to face this warship killer.

It is expected that this new missile will be able to strike enemy warships as far away as 500 nautical miles.

Distance is crucial. If the U.S. Navy can strike farther away than any enemy can reach, then it keeps sailors out of enemy strike range while lobbing staggering, incapacitating blows with the LRASMs.

Enemy warships will be struck with immense destructive power. The LRASM delivers a massive 1,000 pound penetrator and blast fragmentation warhead.

The LRASM also possesses advanced tech - an enhanced digital anti-jam Global Positioning System means it can’t be confused or lose its target even when confronted with electronic attempts to stop the missile.

What will fire these missiles?

This new missile will be used by the U.S. Navy and Air Force. In fact, it can be launched by both aircraft and warships to destroy enemy naval threats anywhere in the world.

Someday soon ships will be armed with LRASMs and protected by this decisively powerful missile.

Missile launched from a bomber during a test. (Lockheed Martin)

The first phase of rollout will be to provide attack capabilities and fleet protection from the air. The current plan is to arm the USAF B1 bombers with them. Recent tests with these stealth bombers have proven very promising indeed.

Next, the U.S. Navy Super hornets, the F/A-18E/F, will ramp up their firepower with LRASMs. Super Hornets can launch off of aircraft carriers, which makes them an excellent choice for supporting a U.S. naval offensive. It also means they can be ready to scramble to protect the fleet within moments, if need be. With their fighter jet speed, they could launch LRASMs to destroy incoming enemy warships before they are within range to attack the fleet.

Eventually, the LRASM could be deck-launched on Navy destroyers.

With a Weapon Data Link, the LRASM can receive in-flight targeting updates after it is launched.

When the LRASM transitions to autonomous guidance, it then carries out and completes its mission on its own. The onboard sensors gather continuous information on the target. LRASM uses the data to identify the target. As the missile approaches the enemy warship, it verifies it has zeroed in on the right target. Finally, the missile strikes the target with gigantic power - enough to sink many types of enemy warships.

An image, taken from a drone, of the missile's belly (Lockheed Martin)

One method of electronic warfare that is familiar to most folks is jamming. An enemy can launch an attack that would stop signals the missile needs to pass through to strike.  In simplified terms, an enemy can launch “jamming” to prevent a missile from receiving its GPS directions. This is similar to when the GPS suddenly stops working when driving a car to reach a destination so the directions to your target destination are suddenly no longer available.

Similarly, some missiles in military arsenals around the world can get confused without GPS and no longer know how to find their targets.

LRASM’s smarts mean that no matter what sort of invisible electronic warfare weapons, like denying GPS, are thrown at it – the enemy cannot confuse or stop the missile from striking its target.

Why does it matter?

The LRASM is vital. Countries like Russia and China have been aggressively ramping up their naval fleets across the board on everything from submarines through to surface missiles. Many would argue tensions between these countries and the United States have intensified of late.

While adversaries have been advancing their missiles for naval battles, the United States has arguably not been as focused on this area. The Navy relies on missiles like the Harpoon that date back nearly 50 years.

The Harpoon has a maximum range of about 67 nautical miles – the LRASM will now provide a range of more than 7 times the Harpoon’s maximum.

The SM-6s are a more recent missile model also designed to strike enemy warships. Publicly, this missile is reported to deliver about 200 nautical miles, but the warhead is smaller and less powerful than the Harpoon. The LRASM will provide approximately more than twice the distance of the SM-6s – and with significantly more overwhelming impact too.

LRASMs have already been successfully tested with B1-B stealth bombers. The missiles are expected to be integrated with F/A-18 Super Hornets for testing this year. In 2019, LRASMs will hopefully reach Naval destroyers and prove just as precise and devastating launched when launched from military platforms on the water.