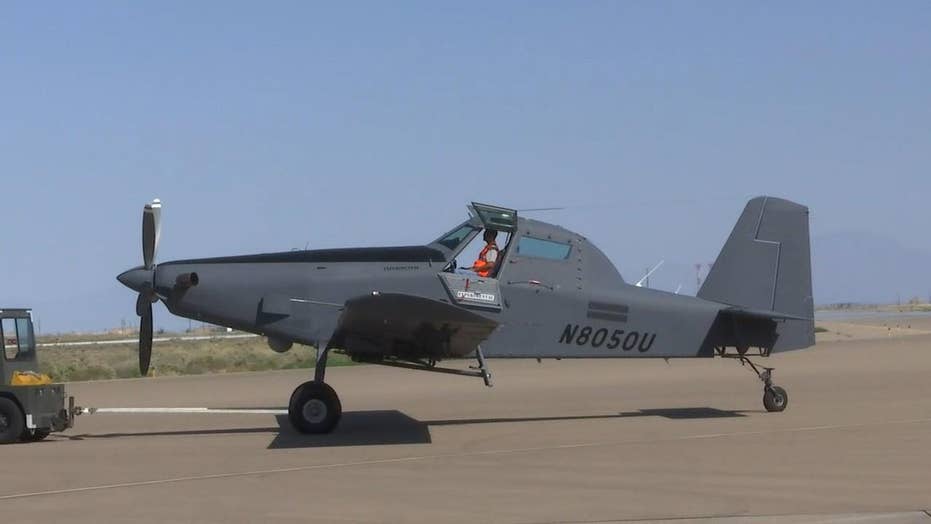 The US Air Force reveals a powerful demonstration of light attack aircraft at its OA-X demo at Holloman Air Force Base. That experiment included Air Tractor's AT-802 crop duster 'Longsword' configuration

Crop dusters regularly fly the skies above America’s heartland, but this combat crop duster is unlike anything Americans have ever seen.

This plane is loaded up with weapons and fortified with armor to take the fight to America’s enemies and help protect U.S. forces on the ground.

HOW SHARKS CAN HELP THE US MILITARY IN THE FUTURE

What sort of modifications? The cockpit is armored – and so are the fuel lines. In fact, the fuel tanks are self-sealing. The wings have been made stronger and equipped to carry some serious firepower into combat…and these are just a few of the enhancements.

The U.S. Air Force has selected Longsword to participate in the ongoing, innovative Light Attack Experiment, or OA-X.

Currently, the Air Force is putting it through a series of tests to see just what it can do at Holloman Air Force Base in New Mexico.

Longsword is almost like a flying version of the iconic rugged, versatile, off-roading truck seen on farms throughout America –one with lots of weapons ready to take on some tough jobs.

What kind of weapons would this modified crop duster bring to the fight?

The Longsword can provide four weapon hard points per wing that can be loaded up with all sorts of weapons to defeat a range of threats.

One option is highly precise hellfire missiles that can eliminate an individual terrorist or even penetrate advanced armor on vehicles.

There’s also Thales’ Scorpion Helmet Mounting Cueing System that means that pilots can use their head to precisely steer weapons and sensor cueing. Targets can be acquired super quickly and then rapidly handed-off to sensors and weapons.

There’s also an integrated mission operator station with L3 ForceX Widow mission management system - another feature that you don’t see every day in the average cropduster.

Why would the US military need combat crop dusters?

The 16,000-pounder genuinely has potential to add a heck of a lot to the fight.

As a light attack aircraft, it could step in to provide air support to American military teams on the ground. It could free up more advanced aircraft like the F-35 to take on other missions.

Say for example, a U.S. Army Special Forces team is pinned down by Islamic extremists on a mission. Air Force pilots could rapidly fly in to support them with some serious firepower at speeds reaching 200 mph.

What exactly can the Longsword do?

In addition to reaching forces who need help quickly, another great advantage is that this weaponized crop duster an land with as little as 1,000 yards of runway. And it doesn’t need a formal airport runway to land.

Dirt roads and tiny airstrips in remote, hard-to-reach places are all fair game. This flexibility is important - the Longsword can land, refuel, reload and rejoin the fight.

When the aircraft is reloaded with water to fight fires, the turnaround time to load a full 820 gallons can be less than five minutes.

What if a light attack aircraft could rendezvous with a team in a remote location close to forces who need help then reload, refuel and return to the air and the fight in under five minutes?

Minutes matter in close air support situations because a minute can mean the difference between life and death for U.S. forces.

While reloading the weapons and fuel may take a bit longer, the turnaround could be just as remarkably fast.

The aircraft also provides versatility in the air.

82ND AIRBORNE TURNS 100: HERE ARE 4 MAJOR INNOVATIONS OVER THE PAST 100 YEARS

Longsword could quickly reach ground forces under attack and then when it reaches the area, it can slow and unload some serious firepower.

And for gathering of critical day from the air, Longsword also has lots of state of the art tech, like an MX-15 EO/IR sensor.