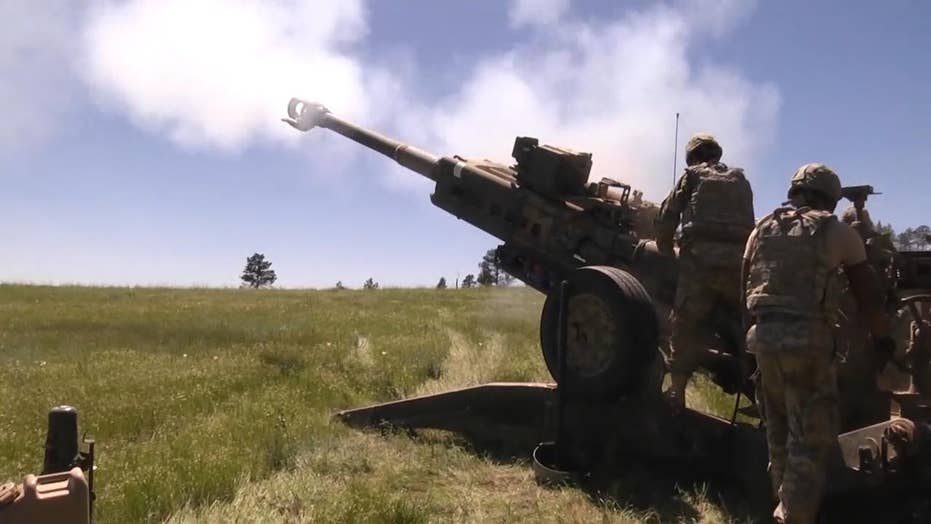 The Army has successfully fired a 155mm artillery round 62 kilometers (38.5 miles) - marking a technical breakthrough in the realm of land-based weapons and progressing toward its stated goal of being able to outrange and outgun Russian and Chinese weapons.

Currently, most land-fired artillery shot from an M777 Towed Howitzer or Self-Propelled Howitzer are able to pinpoint targets out to 30km (18.6 miles) - so hitting 62km marks a substantial leap forward in offensive attack capability.

Murray was clear that the intent of the effort, described as Extended Range Cannon Artillery, is specifically aimed at regaining tactical overmatch against Russian and Chinese weapons.

“The Russian and Chinese have been able to outrange most of our systems,” Murray said.

Citing the Russian invasion of Ukraine as a “wake-up call,” Murray explained that Russian weaponry, tactics and warfare integration caused a particular concern among Army leaders.

“In Ukraine, we saw the pairing of drones with artillery, using drones as spotters. Their organizational structure and tactics were a wake-up call for us to start looking at a more serious strategy,” Murray explained.

The Army’s 2015 Combat Vehicle Modernization Strategy specifically cites concerns about Russia’s use of advanced weapons and armored vehicles in Ukraine.

“The Russians are using their most advanced tanks in the Ukraine, including the T-72B3, T-80, and T-90. All of these tanks have 125mm guns capable of firing a wide range of ammunition, including anti-tank/anti-helicopter missiles with a six-kilometer range, and advanced armor protection, including active protection on some models,” the strategy writes.

ERCA is one of several current initiatives intended to address this. Accordingly, the Army is now prototyping artillery weapons with a larger caliber tube and new grooves to hang weights for gravity adjustments to the weapon – which is a modified M777A2 mobile howitzer. The new ERCA weapon is designed to hit ranges greater than 70km (43.5 miles), Army developers said.

“When you are talking about doubling the range you need a longer tube and a larger caliber. We will blend this munition with a howitzer and extend the range. We are upgrading the breach and metallurgy of the tube, changing the hydraulics to handle increased pressure and using a new ram jet projectile – kind of like a rocket,” a senior Army weapons developer told Warrior Maven in an interview earlier this year.

The modification adds 1,000 pounds to the overall weight of the weapon and an additional six feet of cannon tube. The ERCA systems also uses a redesigned cab, new breech design and new “muzzle brake,” the official explained.

“The ERCA program develops not only the XM907 cannon but also products, such as the XM1113 rocket-assisted projectile, the XM654 supercharge, an autoloader, and new fire control system,” an Army statement said.

As part of an effort to ensure the heavy M777 is sufficiently mobile, the Army recently completed a “mobility” demonstration of ERCA prototypes.

The service demonstrated a modified M777A2 Howitzer with an integration kit for the mass mock-up of the modified XM907 ERCA cannon at Yuma Proving Ground, Arizona.

"Their [user] concern is that when the self-propelled program is done they will be left with a towed cannon variant that they can't tow around, which is its number one mode of transportation," David Bound, M777ER Lead, Artillery Concepts and Design Branch, which is part of the Armament Research, Development and Engineering Center, or ARDEC, said in an Army statement earlier this year.

The ERCA is currently being configured to fire from an M109a8 Self-Propelled Howitzer, using a 58-Cal. tube; the existing M109a7, called the Paladin Integrated Management, fires a 39-Cal. weapon.

This concept of operations is intended to enable mechanized attack forces and advancing infantry with an additional stand-0ff range or protective sphere with which to conduct operations. Longer range precision fire can hit enemy troop concentrations, supply lines and equipment essential to a coordinated attack, while allowing forces to stay farther back from incoming enemy fire.

A 70-kilometer target range is, by any estimation, a substantial leap forward for artillery; when GPS guided precision 155mm artillery rounds, such as Excalibur, burst into land combat about ten years ago - its strike range was reported at roughly 30 kilometers. A self-propelled Howitzer able to hit 70-kilometers puts the weapon on par with some of the Army’s advanced land-based rockets - such as its precision-enabled Guided Multiple Launch Rocket System which also reaches 70-kilometers.

In fact, senior Army developers specifically say that the ERCA program is, at least in part, designed to enable the Army to out-range rival Russian weapons.

The Russian military is currently producing its latest howitzer cannon, the 2S33 Msta-SM2 variant; it is a new 2A79 152mm cannon able to hit ranges greater than 40km, significantly greater than the 25km range reachable by the original Russian 2S19 Msta - which first entered service in the late 1980s, according to data from globalsecurity.org.

Earlier this year, statements from the Ministry of Defence of the Russian Federation said that 2S19 Msta-S modernized self-propelled howitzers were fielded near Volgograd, Russia.

The 2S19 Msta-S howitzers are equipped with an automated fire control system with an increased rate of fire, digital electronic charts, ballistic computers and satellite navigation systems, the report says.

While senior Army weapons developers welcome the possibility of longer-range accurate artillery fire, they also recognize that its effectiveness hinges upon continued development of sensor, fire control and target technology.

“Just because I can shoot farther, that does not mean I solve the issue. I have to acquire the right target. We want to be able to hit moving targets and targets obscured by uneven terrain,” the senior Army developer said.

In a concurrent related effort, the Army is also engineering an adaptation to existing 155mm rounds which will extend range an additional 10km out to 40km.

Fired from an existing Howitzer artillery cannon, the new XM1113 round uses ram jet rocket technology to deliver more thrust to the round.

"The XM1113 uses a large high-performance rocket motor that delivers nearly three times the amount of thrust when compared to the legacy M549A1 RAP," Ductri Nguyen, XM1113 Integrated Product Team Lead.” "Its exterior profile shape has also been streamlined for lower drag to achieve the 40-plus kilometers when fired from the existing fielded 39-caliber 155mm weapon systems."

Soldiers can also integrate the existing Precision Guidance Kit to the artillery shells as a way to add a GPS-guided precision fuse to the weapon. The new adapted round also uses safer Insensitive Munition Explosives.
More Weapons and Technology - WARRIOR MAVEN (CLICK HERE)