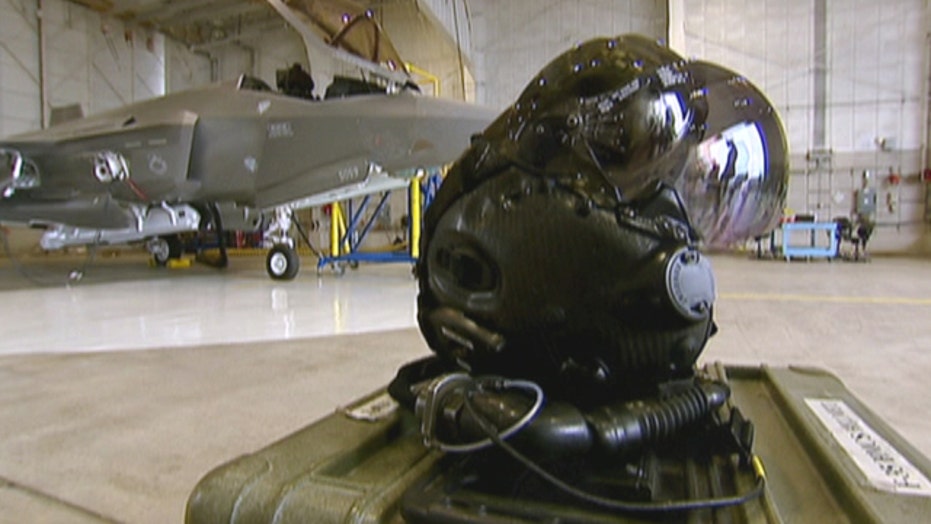 A look at the futuristic new F-35 fighter pilot helmet

Pilots can 'see through' planes

Hill Air Force Base in Utah is home to the U.S. Air Force’s first operational F-35A squadron. While inside the area where pilots don their state-of-the art gear before getting in the cockpit of an F-35A, Maj. Jayson “Vato” Rickard of the 419th Fighter Wing gave me an inside look at the helmet from a fighter pilot's perspective.

So how exactly can pilots see “through” the F-35?

F-35s leverage DAS –the Distributed Aperture System. In the simplest of terms, it means that aircraft has a number of external cameras and sensors that can feed data seamlessly to the pilot. The helmet plugs into the plane, linking the helmet computer with the aircraft’s.  There are optical and magnetic trackers that track 360 degrees wherever the pilot points his or her head. “The cameras cover a 360-degree sphere around the aircraft so I can move my head in any direction and be able to access those sensors. Particularly useful for night-time,” Rickard explained.

From a fighter pilot’s perspective, what difference does the new helmet make? “It’s huge for situational awareness for us … flying at night. Most important for safety,” Rickard said. “It gives me a horizon reference - when it is completely dark outside I can use those infrared cameras that tell which end is up, where the sky is, and where the ground is.”

Integrated night vision is another key advance. “We’ve got several cameras up here. One of them is a day vision camera and one of them is a night-vision camera, so independent of that with the DAS we talked about, with the 360 degrees and looking through [to demonstrate, he looked through the floor of the aircraft]… there’s actually a camera up there that allows me to fly without night vision goggles as I would in my previous platform,” he said. “So that’s all built in and I can project that over my visor… this little outer visor is a sun shield and in here is where the image projects … it’s what we call the display visor.”

“There's about a 30 to 40 degree image over both eyes - handy at night, but we use it extensively in the daytime for keying our weapons and maintaining situational awareness,” he added.

Is it hard to use such an advanced piece of tech? “They made it very well. They made it very intuitive so cavemen fighter pilots such as myself can just plug it in and it just adds another layer of situational awareness ... so very easy to get used to, takes maybe 5 to 10 minutes of looking around before you have it figured out,” said Rickard.

“Tactically, it’s very useful as well because I can look out the window and find a target on the ground, I can designate and employ weapons targets on the ground or up in the air” he added. “What it really brings is my ability to look around 360 degrees and target bad guys.”

The Major said that the system encourages him to look around. “As fancy as our fifth-gen fighter is with all our sensors there’s nothing that substitutes for looking out the window and picking out a bad guy and this display actually encourages me to do that instead of just staring inside,” he said.

The bespoke helmet weighs about four pounds and has a great center of gravity. “This helmet is specifically built for me,” said Rickard. “In fact, I sat in a scanner and they took lasers to scan my head to fit this thing so it fits me extremely well … as bulky as it looks it is actually very comfortable.”

“Has to be custom built,” he added. “Very critical that the helmet fits perfectly because any movement laterally, up or down, affects my ability to use the helmet sensor….[without this precise fit] the symbology wouldn’t line up, I’d have a difficult time targeting stuff on the ground, stuff and in the air, so it’s very critical that it’s fit specifically to me.”

The Air Force will use data from the Gen III  helmets for reconstructing missions. ‘The reason we are the best air force in the world is because we spend hours debriefing everything,” he said. “In an hour and half sortie we might spend three or four hours debriefing … so that actually records my helmet image and allows us to reconstruct a mission … figure out what we did right what we did wrong and develop lessons learned.”

From an F-35 fighter pilot’s perspective

Rickard says that F-35A will prove a critical weapon in the Air Force’s arsenal. “It’s absolutely where we need to go for taking the fight to the enemy, particularly in tomorrow's wars the enemy continues to get more and more advanced, the 5th generation aspects, the stealth, the sensor fusion [tech] … is going to allow us to operate in a very contested environment, to where we will have a difficult time getting there with some of the legacy platforms like the F-16.”