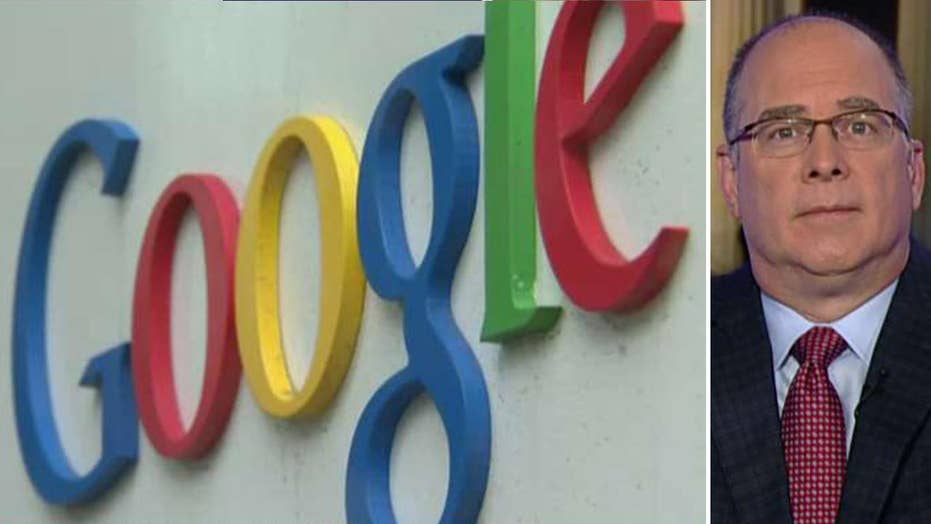 Google shut down its Chinese search engine in 2010. But new reports say Google is building a brand new, censored search engine that will allow it to re-enter the Chinese market, where it will be actively abetting the Communist police state. Last year, Google opened a major artificial intelligence research center in China. #Tucker

Google employees have written a letter to company management expressing their displeasure with the tech giant's proposed search engine for China, which would see certain search results be censored at the Chinese government's request. Employees have demanded that the company be more transparent about its decisions, and the letter also calls the project's ethics into question.

The letter, obtained by BuzzFeed News, states that the Mountain View, Calif.-based search giant needs to have more transparency about how it operates and relay that to its employees. "Our industry has entered a new era of ethical responsibility: the choices we make matter on a global scale," the letter states, specifically referencing the Chinese search engine project, codenamed Dragonfly.

"Yet most of us only learned about project Dragonfly through news reports in early August. Dragonfly is reported to be an effort to provide search and personalized mobile news to China, in compliance with Chinese government censorship and surveillance requirements. Eight year ago, after Google Pulled censored websearch out of China, Sergey Brin explained the decision, saying: 'In some aspects of [government] policy, particularly with respect to censorship, with respect to surveillance of dissidents, I see some earmarks of totalitarianism.' Dragonfly and Google’s return to China raise urgent moral and ethical issues, the substance of which we are discussing elsewhere."

The letter has been signed by approximately 1,000 people at the company, according to The New York Times, which first reported the dissent.

In addition, the letter also asks management to satisfy four conditions regarding ethics and transparency:

2. The appointment of ombudspeople with meaningful employee input into their selection

3. A clear plan for transparency sufficient to enable Googlers an individual ethical choice about what they work on; and

4. The publication of “ethical test cases”; an ethical assessment of Dragonfly, Maven, and Airgap GCP with respect to the AI principles; and regular, official, internally visible communication and assessments regarding any new areas of substantial ethical concern.

Fox News has reached out to Google with a request for comment on this story.

HOW TO FIND AND DELETE WHERE GOOGLE KNOWS YOU'VE BEEN

Rumors of the Chinese-based search engine have circulated over the past few weeks after The Intercept reported that it had seen leaked documents, suggesting the Sundar Pichai-led Google was planning to re-enter China, nearly 8 years after leaving the country.

The search engine, which would be app-based, would remove items that contain certain words or phrases and would apply to image search, suggested search features and automatic spell check. It would also “blacklist sensitive queries” so no results are shown when a person looks for a specific word or phrase, The Intercept added.

In 2010, Google famously announced it was leaving China, specifically mentioning China's censoring tactics as a reason for pulling out of the country.

GOOGLE IS FINED $5B BY EU IN ANDROID ANTITRUST CASE

As rumors of the China-based search engine have trickled out in the press, reaction on social media has been negative, with many calling the company's infamous "Don't be evil" motto into question.

"It’s quite ridiculous that in the 21st century one of the most powerful countries in the world denies its citizens access to common knowledge," one user wrote. "If Google cares about its reputation (at the very least) then it should definitely reconsider project Dragonfly."

Earlier this year, Google dropped “Don’t be evil” from its official code of conduct.

The Intercept notes that only a "few hundred" employees at the company know about the project. According to its most recent quarterly report, Alphabet (Google's parent company), employed 89,058 people as of June 30.

Several employees even resigned in protest at the company's work, with a number of employees writing a letter to Pichai that the company “should not be in the business of war.”

According to media reports, Google will not seek another contract when the current Project Maven contract expires in 2019.