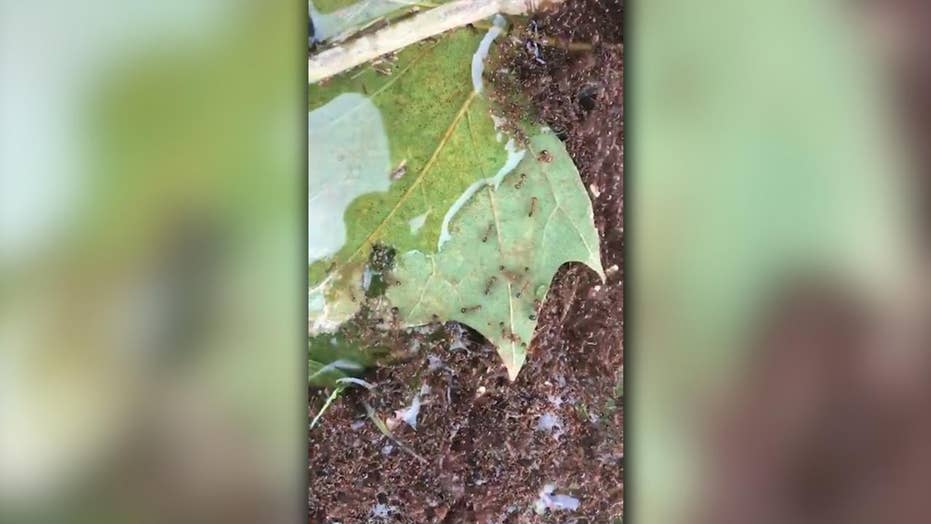 Aside from the stings and ruined picnics, fire ants are famous for their ability to swarm together and self­–assemble bridges, ladders, and even floating rafts. Researchers have now figured out the statistical rules that govern how fire ants form these structures, and the new study could help scientists build swarming, tiny shape-shifting robots.

A team from the University of Colorado at Boulder wanted to learn how the self–made rafts, bridges, and ladders– which can take hundreds to thousands of fire ants to form– can change shape in a matter of seconds and maintain a rubber-like flexibility.

“Fire ants are a great subject of study because they display collective intelligence and they’re also macroscopic, which makes them relatively easy to observe and study,” lead study author Franck Vernerey told Fox News. “Recent studies have measured how fire ant [clusters] flow under stress and have opened a window into understanding these communication rules. In this paper, we proposed a statistical theory that links these rules between individuals to their collective behavior and thus paves the way to understanding the origin of swarm ‘intelligence’.”

Vernerey and his team used another Georgia Tech University study as a starting point. That study showed that ant colonies keep flexible by constantly being on their toes (or in this case, the sticky pads on their feet). By hanging onto the ants next to them, they shift on their feet, latching onto a different neighbor every .7 seconds.

Building from that data, the researchers used mathematical equations to break down the inner dynamics of the ants’ movements. They found that as the force on the ant increases, it moves faster. And when the force on an ant’s leg has to support more than eight times its body weight, the insect shifts its foot position to lessen the load, moving between its fellow ants at a faster rate.

“Our hypothesis was that the rate at which individual ants break their connections with neighbors increased with the force that they feel due to deformation of the [formation],” Vernerey explained. “It correctly predicted the three phases observed experimentally: when deformed slowly, the ants have ample time to reconfigure themselves by breaking and reforming connections, thereby flowing like a typical fluid. When deformed faster, the ants sense the increased force in their legs and respond by detaching their legs faster from their neighbors resulting in much easier flow.”

The last phase, when the forces increase with so much speed that the ants can’t keep up and they no longer have time to detach from their neighbors is when the whole formation bends like solid rubber to resist from falling apart.

Vernerey believes the new statistical theory paves the way to understanding the origin of swarm intelligence. It also could lead to a new wave of bio-inspired robots. “As engineers, one main motivation for studying these insects is that we could potentially harness these simple rules to propose bio-inspired, synthetic materials that could be just as smart,” he explained. “For instance, we found that fire ants can form clusters that flow like a fluid or stiffen up like a solid at will. Harnessing that kind of ability in our own materials would put us one step closer towards having ‘programmable matter’ with extraordinary functions.”

The new materials could be developed for robots that might be able to slim down and access tight spaces.

“They could reconfigure themselves to perform complex tasks like recovering important pieces of information in reconnaissance missions, providing temporary structural supports like scaffolds or simply mimicking the shapes of other objects at the user’s will– knives or screw-drivers, for example,” Vernerey proposed. “The thing is, it’s actually quite difficult and involved to design this kind of smart, modular matter at the length scale of ants or smaller. By learning from fire ants and other social insects, we can identify a set of very basic rules that engineers can use as a roadmap for designing such materials in the future.”