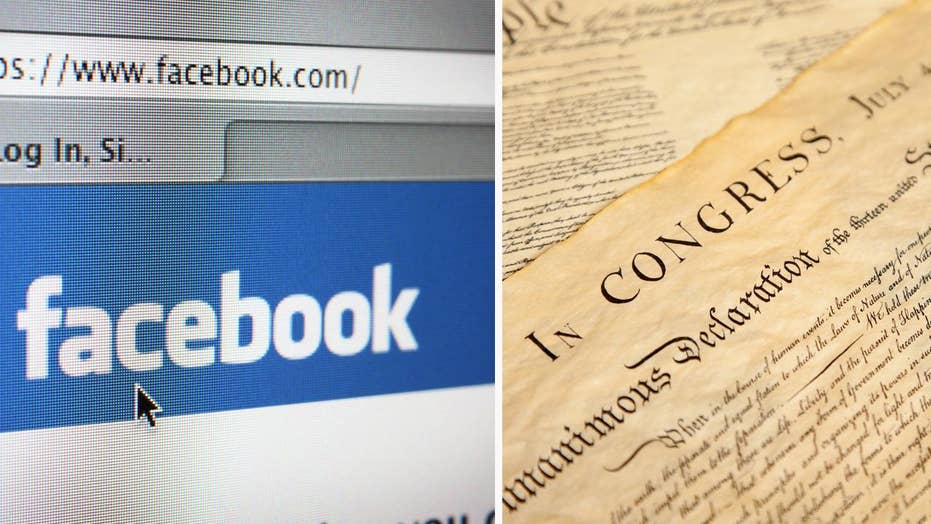 Facebook’s algorithms are in the spotlight after the social network tagged an excerpt from the Declaration of Independence as hate speech.

The Liberty County Vindicator in Liberty, Texas, has been posting excerpts from the document to its Facebook page. “Leading up to Independence Day, The Vindicator challenged its Facebook followers to read the Declaration of Independence. To make it a little easier to digest that short but formidable historic document, the newspaper broke the Declaration down into 12 small bites and one to post each morning from June 24 to July 4,” explained Vindicator Managing Editor Casey Stinnett, on its website.

While the first nine excerpts posted as scheduled, the 10th part, consisting paragraphs 27 to 31 of the Declaration, did not appear. The Vindicator then received a notice from Facebook saying that the post “goes against our standards on hate speech.”

The offending excerpt, which details a long list of transgressions committed by King George III, contains the following passage:

“He has excited domestic insurrections against us, and has endeavoured to bring on the inhabitants of our frontiers, the merciless Indian Savages, whose known rule of warfare, is an undistinguished destruction of all ages, sexes and conditions.”

“Perhaps had Thomas Jefferson written it as ‘Native Americans at a challenging stage of cultural development’ that would have been better,” the managing editor quipped. “Unfortunately, Jefferson, like most British colonists of his day, did not hold entirely friendly view of Native Americans.”

“The removal of the post was an automated action,” he added. “If any human being working at Facebook were to review it, no doubt the post would be allowed.”

The newspaper said that it received an email from Facebook acknowledging its error Tuesday, which confirmed that the post had been restored.

“It looks like we made a mistake and removed something you posted on Facebook that didn’t go against our Community Standards. We want to apologize and let you know that we’ve restored your content and removed any blocks on your account related to this incorrect action,” Facebook said, in its email to the Vindicator.

“The post was removed by mistake and restored as soon as we looked into it,” a Facebook spokeswoman explained in a statement emailed to Fox News. “We process millions of reports each week, and sometimes we get things wrong.”

“They demonstrate a problem with automated enforcement of hate speech policies, which is that a robot trained to spot politically incorrect language isn't smart enough to detect when that language is part of a historically significant document,” he wrote.

The social network’s algorithms are coming under close scrutiny at the moment. Facebook was slammed by the Wes Cook Band this week after it prevented the country group from using the social network's paid tools to promote its song "I Stand for the Flag."

The situation has prompted allegations of bias against Facebook.

Despite the criticisms, Facebook continues to ramp up its efforts around AI to better serve society. The social network has already harnessed the technology to help blind people ‘see’ the platform and also flag posts by people thinking of harming themselves.