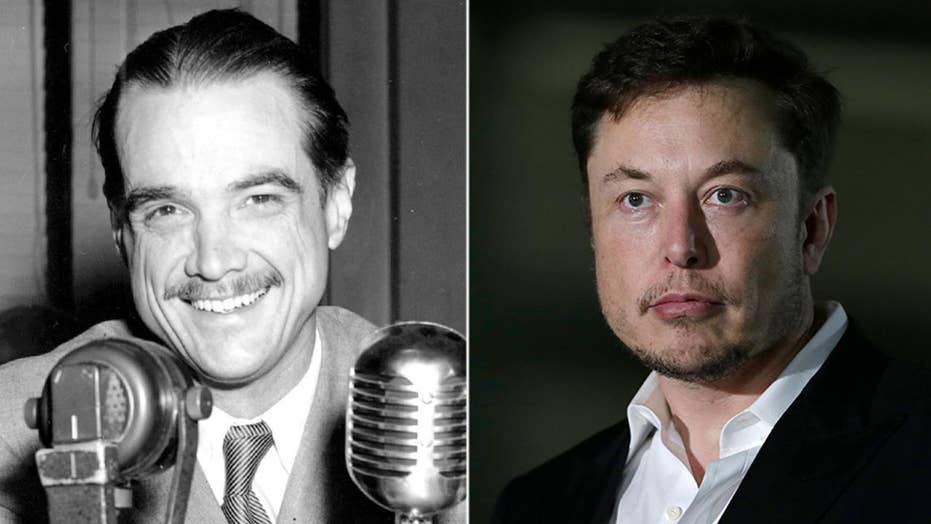 As the behavior of Tesla and SpaceX founder Elon Musk has become more erratic, the comparisons between Musk and late billionaire Howard Hughes have become too similar to ignore.

Smart beyond most of humanity's wildest imaginations. Eccentricity levels off the charts. Personal lives involving Hollywood starlets that have lurched into professional lives and made them tabloid fodder.

Is Elon Musk turning into a modern-day Howard Hughes?

The question has been given new life after Musk, 47, appeared on Joe Rogan's podcast Thursday night, smoked weed, drank whiskey and discussed electric planes capable of vertical takeoff and landing. The strange behavior comes at a time when his car company, Tesla, has struggled mightily and his increasingly erratic behavior has made the spotlight on him even brigther.

Last month, Musk sent out a tweet where he said: "Am considering taking Tesla private at $420. Funding secured." 420 is a marijuana reference, though Musk told the New York Times in a lengthy interview that at the time the tweet was sent, he was "not on weed," adding it's "not helpeful for productivity."

He sent shares into a frenzy with the tweet, spurring the U.S. Securities and Exchange Commission to launch an investigation into the veracity of his statement. Musk subsequently decided that Tesla will remain a publicly traded company.

Tesla refused to comment about Musk smoking pot on the podcast. But the company did point Fox News to an 8-K filing about its Chief Accounting Officer resigning, despite only being there for one month.

Musk has yet to respond to a request for comment from Fox News.

"Elon is Wernher von Braun, Howard Hughes, Henry Ford, Bill Gates, Steve Jobs and every other badass all rolled into one."

Musk's relationships with Johnny Depp's ex Amber Heard and the pop musician Grimes (which appears to be over, after the two unfollowed each other on Twitter, according to Complex) are reminiscent of Hughes' relationship with Hollywood starlets like Ava Gardner, profiled in Martin Scorcese's "The Aviator."

For Gardner and Hughes, it started off as a passionate affair, but turned into a ball of fire. In her autobiography, Gardner wrote that Hughes was in and out of her life for 20 years, but described him as "painfully shy, completely enigmatic, and more eccentric ... than anyone [she] had ever met."

Prior to the supposed end of their relationship, Grimes (real name Claire Boucher) took to Twitter to defend the way Musk runs Tesla, according to The Atlantic. (The tweets have since been deleted.)

Similar to Hughes and Gardner, albeit much shorter in length, Musk and Heard had an on-again-off again relationship that ultimately ended earlier this year, according to People.

In November 2017, Musk told Rolling Stone that he "will never be happy without having someone," adding "Going to sleep alone kills me.”

The Musk and Hughes comparisons have popped up before, as far back as 2013.

According to Business Insider, Dolly Singh, the former Head of Talent at SpaceX, Musk's space exploration company, described him as Hughes-like.

"In my humble opinion, Mr. Jobs in all his greatness has nothing on Elon," Singh wrote in a Quora post. "Elon is Wernher von Braun, Howard Hughes, Henry Ford, Bill Gates, Steve Jobs and every other badass all rolled into one."

Musk has a rocky relationship with Business Insider after he claimed a columnist "published several false articles about Tesla."

A Google search for "Elon Musk Howard Hughes" pulls up approximately 6 million results, indicating that Musk's approach towards business and his personal life is eerily reminiscent of Hughes; the billionaire business magnate eventually became a recluse after displaying increasingly erratic behavior throughout his life.

Interestingly enough, Musk tweeted early Friday that he is a "business magnet," though it's unclear if he misspelled magnate on purpose or was trying to be whimsical.

Musk's proclivity for Twitter and his inability to not shoot himself in the foot are also eerily reminisicent of Hughes' destructive outbursts of temper and lack of a filter.

The most recent occurence was earlier this week, when after apologizing for calling Vernon Unsworth, one of the British divers who helped rescue the Thai soccer team a "paedo," he called Unsworth a "child rapist" in an email to BuzzFeed News.

“I suggest that you call people you know in Thailand, find out what’s actually going on and stop defending child rapists, you f---ing a-------,” Musk wrote in one of two emails to BuzzFeed.

Like Hughes, Musk has started companies that have changed the world, focusing on clean energy and space travel, whereas Hughes focused on the film industry and aviation.

In addition to Tesla and SpaceX, Musk co-founded PayPal, started Zip2, an online city guide (similar to today's Google Maps and Yelp) and started Neuralink, a company that describes itself  as "developing ultra high bandwidth brain-machine interfaces to connect humans and computers."

Hughes also founded the Hughes Medical Institute, an American non-profit medical research organization based in Chevy Chase, Md. whose mission is to "advance basic biomedical research and science education for the benefit of humanity." It had an endowment of $22.6 billion at the end of 2017, according to its financial statements.

Whether Musk's story continues to resemble that of Hughes is unclear at this point, though the comparisons have become too similar to ignore.

For his part and his long-term health, it may be in his best interest to take a long vacation, even if he thinks they are cursed.