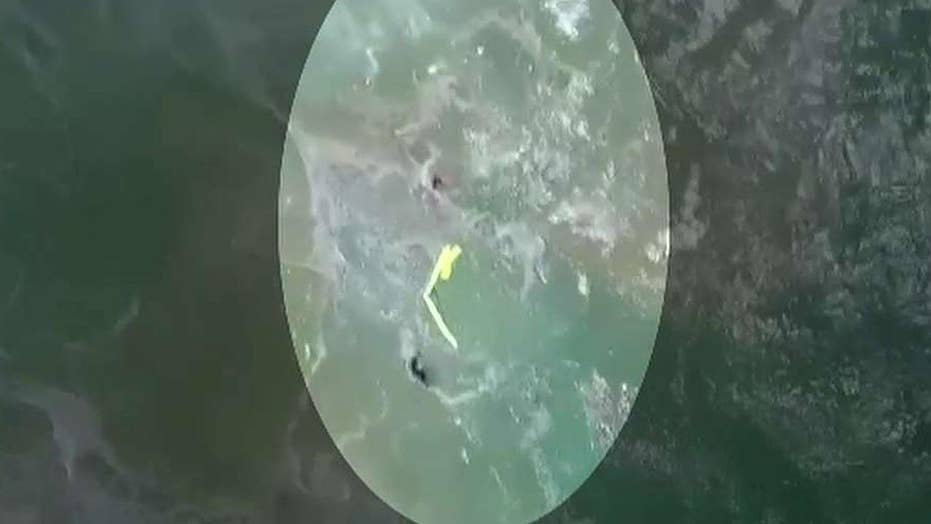 A drone came to two Australian teenage boys’ rescue on Thursday when they were caught in dangerous waves — the world’s first rescue by the unmanned aircraft that was caught on camera.

A bystander alerted lifeguards after seeing the two teens, ages 15 and 17, struggling to stay afloat in heavy surf off the coast of Lennox Head in New South Wales, Australia’s ABC News reported.

Lifeguard supervisor Jai Sheridan spotted the swimmers about 2,300 feet offshore and launched the drone — hours after the device was taken out of the box — and flew it to the area.

"I was able to launch it, fly it to the location, and drop the pod all in about one to two minutes,” Sheridan told The Sydney Morning Herald. “On a normal day that would have taken our lifeguards a few minutes longer to reach the members of the public."

DRONES ARE BEING USED TO DELIVER BLOOD, SAVING LIVES IN AFRICA

The teens clutched onto the inflatable rescue pod and swam back to shore. They showed signs of fatigue, but were ultimately unharmed in the incident.

The teens were rescued in 70 seconds with the drone— while a lifeguard would have taken up to six minutes to complete the rescue, according to Ben Franklin, Parliamentary Secretary for Northern NSW.

"This is a world-first rescue," Deputy Premier and Minister for Regional NSW John Barilaro said. "Never before has a drone fitted with a flotation device been used to rescue swimmers like this."

The Little Ripper drone was unveiled and taken out of the box earlier that morning, part of the government’s nearly $344,000 investment in drone technology.

"This was an extraordinary rescue with the very best possible outcome,” Franklin said.