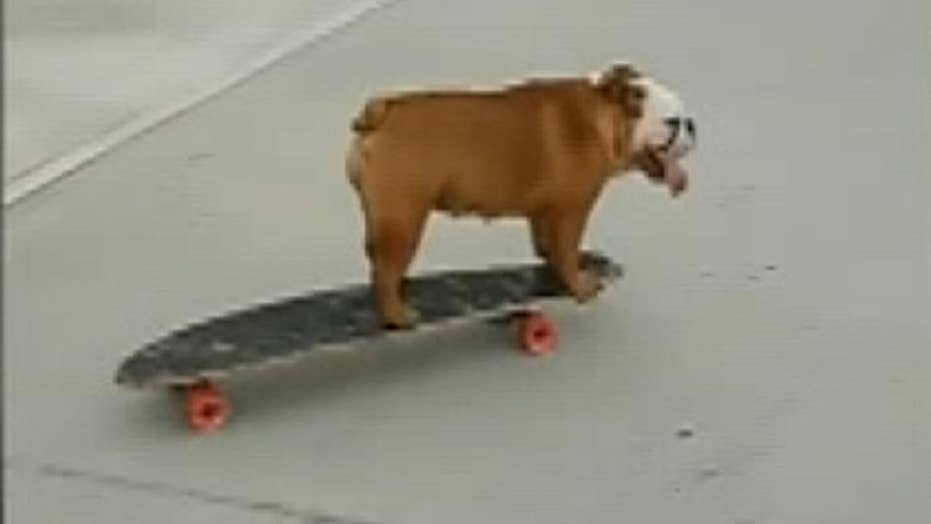 Raw video: Plucky pet bulldog Pumpkin scoots around town in the U.K. The dog's owner says the 14-month-old pooch taught herself to skateboard and has since become an online hit.

This gives the phrase "gone to the dogs" a whole new meaning.

A 14-month-old bulldog in the U.K. named Pumpkin has become an Internet sensation after her owner posted to social media videos and pictures of her riding around on a skateboard.

Pumpkin's owner, 33-year-old Debra Chandler, said that the dog taught herself how to ride the skateboard and has surprised onlookers with her dexterity, SWNS reports.

"It started when she was just an eight-week-old puppy and we bought her a skateboard just for a laugh, really," Chandler said in comments obtained by SWNS. "I've seen bulldogs in the U.S. skateboarding but none over here and thought it would be great if she took to it."

Chandler added that Pumpkin has never been forced to ride the skateboard or used treats to be tempted. "She just naturally jumped on it and proved to be a complete natural," she said.

The 14-month-old dog has self-taught itself how to skateboard and enjoys nothing more than scooting around the streets much to the astonishment of onlookers. (Credit: SWNS)

Chandler also shared that it took a while for Pumpkin to get the hang of riding the board, but now hangs out by the garage looking for it so she can get on and ride free.

"She’s got a drive to do it," Chandler said. "She just climbs on board and then casts herself off — she can go quite fast. I just let her do it because she finds it so much fun and she can just keep going and going."

Pumpkin is also a star on social media, with Chandler having set up Facebook, YouTube and Instagram accounts for her. She hopes to get a sponsor for her and perhaps a new skateboard in the future.

"But for now, we're just happy that people enjoy watching her."