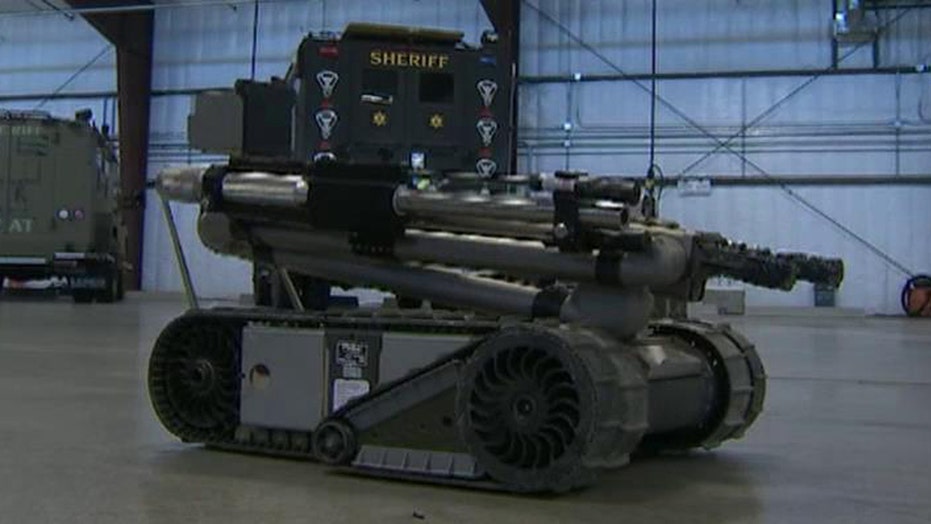 Is weaponization the future of police robots?

Dallas police used an explosive device attached to a robot to kill a suspect in the coordinated sniper attack that killed five officers Thursday, in what experts say is a first for U.S. law enforcement.

In a press conference Police Chief David Brown explained that the robot was deployed on the second floor of El Centro College in downtown Dallas following a standoff early Friday.

“We cornered one suspect and we tried to negotiate for several hours - negotiations broke down, we had an exchange of gunfire with the suspect,” he said. “We saw no other option but to use our bomb robot and place a device on its extension for it to detonate where the suspect was,” he said.

Brown explained that “other options” would have exposed the police officers to great danger.

The police chief confirmed that the suspect was killed by the bomb’s detonation, noting that reports the suspect killed himself were inaccurate.

Specific details of the robot used by Dallas Police have not been released.

The Dallas Police’s deployment of its bomb robot Friday is the first time that a police force has used the technology to kill a suspect, according to defense expert Peter Singer. In a tweet, Singer noted that the MARCbot machine, which is designed to tackle bombs such as IEDs, has been used as a weapon in Iraq.

Yes, this is 1st use of robot in this way in policing. Marcbot has been ad hoc used this way by troops in Iraq. https://t.co/FfrsgLS2x1

The Dallas Police Department has not yet responded to a request for comment on this story from FoxNews.com.

Police consultant and retired L.A.P.D Lieutenant Raymond Foster told FoxNews.com that he is not aware of any robot bombs in the possession of law enforcement. “I suspect [Dallas Police] used their bomb robot in some improvised manner,” he added.

In his press conference, Brown praised the work done by the police negotiator during the standoff before the bomb robot was sent in.

“Our hostage negotiator did an exceptional job getting this suspect to talk before he died, during the hours of negotiation that eventually broke down,” he said.