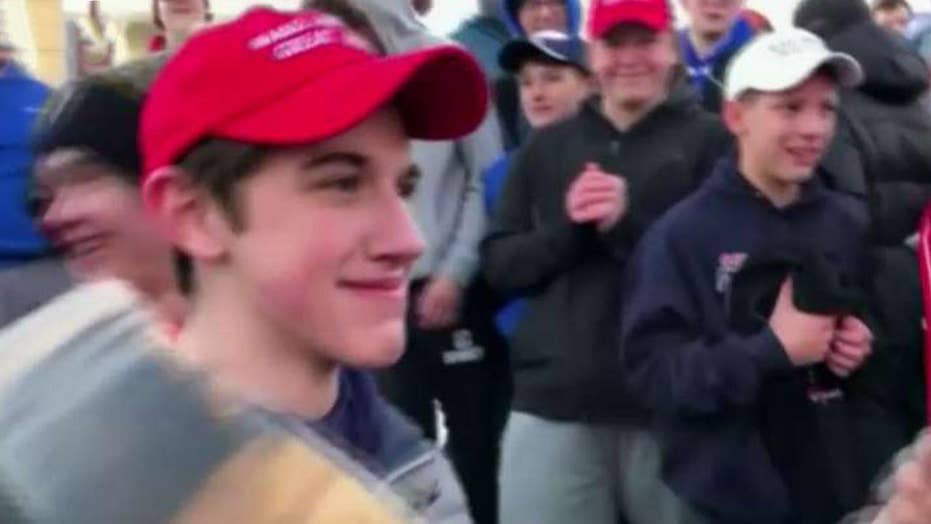 Covington students still being smeared despite emergence of additional video

Lawmakers have reportedly asked Twitter for details of the shadowy account that circulated a controversial video of students from Covington Catholic High School and their encounter with a Native American activist near the Lincoln Memorial.

Recorded images of the encounter that initially sparked outrage on social media were tightly focused on the students wearing "Make America Great Again" hats who seemed to laugh derisively as they surrounded an elderly Native American beating a drum.

Twitter suspended the @2020fight account on Monday after it helped spread the video of the encounter between the white students from the high school in Kentucky and the Native American activist.

Longer videos from wider perspectives emerged later over the Martin Luther King holiday weekend. They revealed the drummer — Omaha Nation elder Nathan Phillips — had intervened between the boys and the religious sect. That came after the teens seemed to grow rowdier and the black street preacher who had been shouting racist statements against both groups escalated his rhetoric.

The video that sparked social media outrage initially surfaced on Instagram, according to a CNN Business report, although @2020fight’s description of the video was widely circulated on Twitter and in the broader media. The clip was reportedly captioned: “This MAGA loser gleefully bothering a Native American protester at the Indigenous Peoples March.”

Twitter prohibits the creation of "fake and misleading accounts," and the encounter once again demonstrated the power of social media to not just amplify but manipulate narratives, aided by bots and malicious actors out to shape public discourse.

The media’s interest in the video also helped it quickly go viral.

The @2020fight account reportedly used a photo of Nah Cardoso, a Brazilian social media star. However, a source with knowledge of the situation told Fox News there is evidence that the account originated in the U.S.

A legal adviser to Cardoso told CNN that Cardoso had not authorized any other account to user her image or content.

CNN reports that the @2020fight account was set up in December 2016 and listed a description of “Teacher and advocate” in its Twitter bio. The account was purportedly originated in California.

Fox News has reached out to the House Intelligence Committee and Sen. Warner with a request for comment on this story. Twitter is actively engaged with the committees, as is the company’s standard practice, according to the source with knowledge of the situation.

The @2020fight account had significant mentions before the posting of the video of the Covington students, according to social media specialist Storyful. There were more than 6,000 mentions of the account on Twitter between Jan. 10 and Jan. 17. Tweets referencing @2020fight skyrocketed from Jan. 18. when the video was first posted, through Jan. 20, with nearly 50,000 mentions on the social media site.

According to Storyful, the account had posted significant anti-Trump sentiment in the past. A now-defunct WordPress blog of the same name posted content back in 2017 that was mostly against mainstream media.

The @2020fight account was also discovered to feature the same stock profile of someone listed as a “top influencer” on a website known as Shoutcart, where individual users or brand accounts can upload photos and videos, pick influencers and purchase “shoutouts” from a particular user. While the account for @2020fight is no longer active on Twitter or Shoutcart, archived information says that the account had 39,000 followers and been a member of Shoutcart since February 2018.