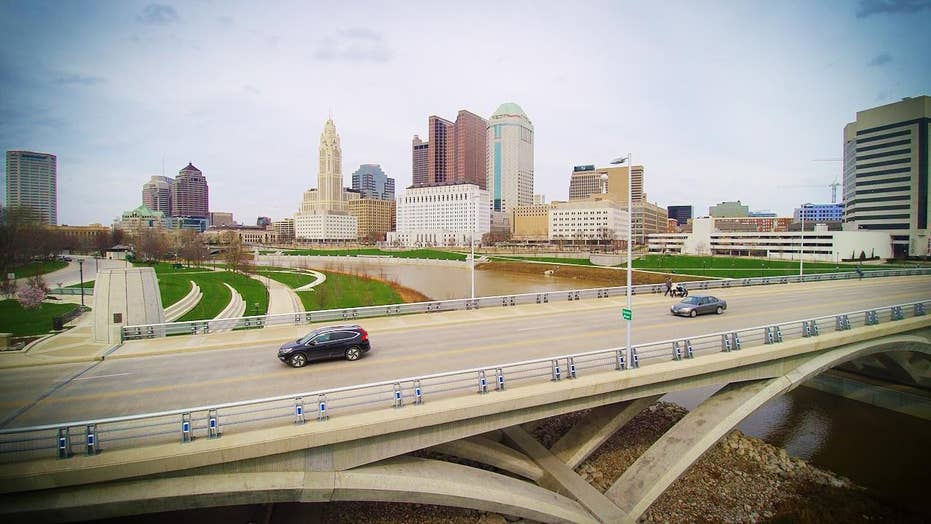 America’s first smart city is almost 2,500 miles from Silicon Valley. So it’s not San Francisco. It’s also 1,200 miles from Austin, Texas, home to one of America’s fastest-growing STEM workforces. It’s not Portland, Ore., Denver, Kansas City or Pittsburgh, either — though all were finalists in the 2016 Smart City Challenge.

America’s first smart city is Columbus, Ohio — the fastest-growing city in the Buckeye State and the second largest city in the Midwest, after Chicago.

Now, with $40 million in funding from the U.S. Department of Transportation and another $10 million from Vulcan Inc., a company founded by Microsoft billionaire Paul Allen, Columbus — “The Crossroads of Ohio” — is poised to become the blueprint for the future of urban planning.

And what, exactly, is a “smart city”? It’s a buzzword, says Jordan Davis, director of smart cities at the Columbus Partnership. “What a smart city is, is not yet to be defined.”

But given the enormity and ambiguity of creating one, Davis and her colleagues are focusing on one thing at a time, starting with transportation. Columbus (pop. 860,090) experienced a worrisome increase in traffic congestion and car accidents as its population grew 1 percent last year, but Davis has no plans to add more highway lanes or parking garages. She’s not focusing on how many people are getting around, but how they’re getting around.

“Mobility and transportation result in hundreds of deaths a year in our city,” Davis said. “If we can improve how people get around, we’ll save people’s lives.”

That means using integrated data exchange (IDE), which will collect data from sensors installed on traffic lights and from other databases; analyze the data to determine which intersections are prone to accidents and which streets are frequently blocked off; and then alert drivers, or even vehicles, accordingly.

It also will also look for parking solutions, because the Smart City Challenge report estimates that 30 percent of urban traffic is caused by drivers looking for parking spaces. One suggestion is to develop technology that will inform drivers of available parking locations and tell them the safest route to get to them.

But drivers in Columbus, and in the rest of the country, are causing problems far worse than traffic congestion.

“Ninety-five percent of traffic accident fatalities are the result of human error,” says Doug Marsden, former chief technology officer at Transportation Research Center Inc. With 35,000 accidents occurring every year in the U.S., Columbus hopes to achieve a future that takes people out of the driver’s seat. And it’s not alone: 53 of the 78 cities that competed in the Smart City Challenge proposed implementing dedicated short-range communication (DSRC), which uses a special frequency that allows vehicles to communicate directly with one another, in their proposals.

“One of the biggest issues today is when the car is making a left-hand turn and they can’t see another car coming at them,” says Carla Bailo, assistant vice president of mobility research and business development at Ohio State University. Vehicles equipped with DSRC can avoid such “T-bone collisions,” even if the driver doesn’t see the other vehicle, because his vehicle knows it’s there and will not accelerate. Columbus is asking drivers to sign up for the connected vehicles initiative on its website.

“When I say safety, it’s not just for the car and the driver,” said Bailo, explaining that the goal is to prevent accidents from occurring in the first place. Radar and cameras installed for cars will be able to distinguish between living things and inanimate objects. A camera-oriented collision avoidance system will alert city bus drivers to pedestrians and pets. Enhanced LED streetlights in residential neighborhoods will make driving safer at night. And there’s more, though most of the Transportation Department’s initiatives for the city won’t be launched until late next year.

Improving traffic conditions in commercial areas is also critical. Plans call for real-time scheduling of downtown deliveries in order to minimize congestion. Long-haul truck drivers will benefit from both an interstate truck parking platform designed to help them find parking and from “platooning” — connecting long-haul trucks on Greater Columbus freeways so they can travel together. This will reduce fuel emissions, something the Columbus Smart City plan takes very seriously.

The plan also calls for introducing 780 electric vehicles into the city’s public and private sectors by 2020, implementing automated shuttles and creating a system that adjusts speed limits in conditions like inclement weather.

The public is encouraged to be part of the planning process by providing innovative ideas, but be forewarned: “Anyone that’s bringing new technology to the Smart Columbus area will need to prove it out first in a safe and secure facility,” Marsden said.

But if everything works, getting around Columbus should become significantly safer and more efficient.

“It’s going to allow people in and out of the city for major events with less congestion,” Marsden said. “It’s going to allow them to find parking spots quicker through mobile applications on their phones and parking lot sensors. It will expose people to these advanced technologies that are going to be commonplace in five, 10 years.”

As for the future of self-driving cars, Bailo estimates it will be another 30 to 40 years before autonomous cars are allowed on most public roads, but she anticipates seeing them in HOV lanes or special geo-fenced-in areas by 2025.

Davis says Columbus won’t become a smart city overnight. It will be a living laboratory for many months. Still, she has a good idea of what to look forward to.

“A smart city really, truly allows our community to be more efficient, safer and enables us to grow,” she said.

“That, at the end of the day, is a smart city, and therefore, a safer city.”