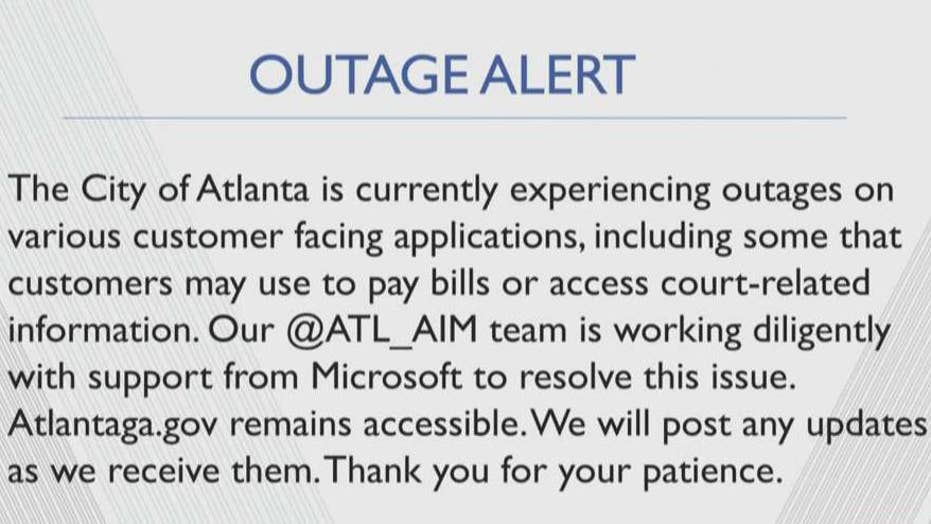 Officials say they are working with Microsoft to fix issues after applications that allow customers to pay bills, access court-related information experience outages.

The City of Atlanta has been targeted in a ransomware attack that has impacted a number of its systems.

“The City of Atlanta is currently experiencing outages on various internal and customer facing applications, including some applications that customers use to pay bills or access court-related information,” a spokesperson for the city explained, in a statement emailed to Fox News.

The outage, which included the encryption of some city data, did not affect the public safety department, water department or Hartsfield-Jackson Atlanta International Airport, Chief Operating Officer Richard Cox said.

But some applications that people use to pay bills or access court information were affected. Cox said an investigation would determine whether any personal information has been compromised.

The attack was discovered by the city's information security team, which noticed “something that looked peculiar” on the server and began investigating, acting Chief Information Officer Daphne Rackley said.

Atlanta’s Information Management team is working with Microsoft to resolve the issue, according to the city. “We are confident that our team of technology professionals will be able to restore applications soon,” it added. “Our City website, Atlantaga.gov, remains accessible and we will provide updates as we receive them.”

Citing a screenshot taken by a city employee, WXIA reported that that hackers were demanding $51,000 in bitcoin. The cryptocurrency is popular with hackers because it is hard to trace.

The FBI is working with the city to determine what happened in the attack.

Last year, a major ransomware attack forced the shutdown of a host of IT systems at Mecklenburg County, North Carolina.

In 2016, a Los Angeles hospital paid a ransom of nearly $17,000 in bitcoins to hackers who infiltrated and disabled its computer network.