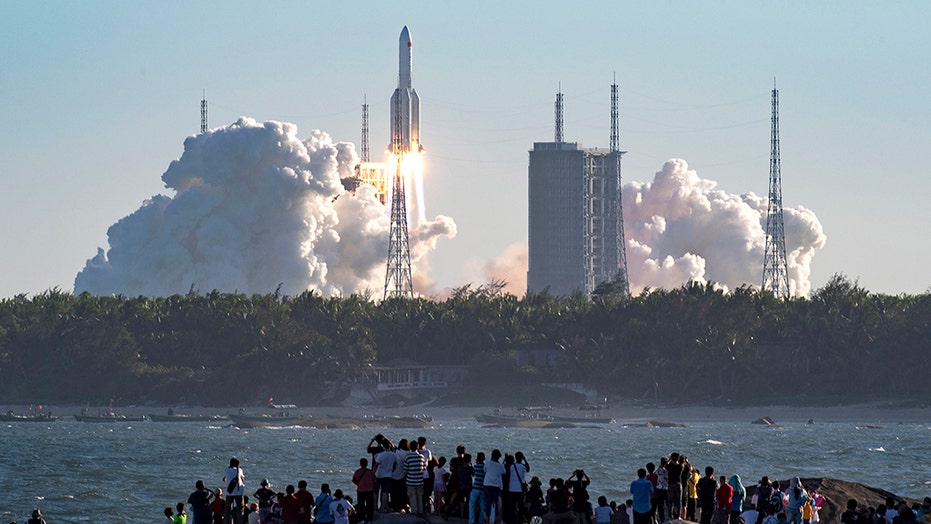 Space junk from a new Chinese rocket narrowly missed dropping down on New York City Monday night, according to a report, largely burning up in the atmosphere before some of the debris survived long enough to slam into West Africa.

China test-launched its new single-stage Long March 5B rocket last Tuesday, propelling its cargo into orbit before the 20-ton core eventually fell back into the atmosphere, according to Ars Technica, a technology publication.

In this photo released by Xinhua News Agency, China's new large carrier rocket Long March-5B blasts off from the Wenchang Space Launch Center in southern China's Hainan Province, May 5, 2020. The Long March-5B made its maiden flight on Tuesday, sending the trial version of China's new-generation manned spaceship and a cargo return capsule for test into space. (Guo Cheng/Xinhua via AP)

It’s unlikely that anywhere near that large of an object is what returned to Earth -- but fragments weighing up to several hundred pounds could have survived re-entering the atmosphere, astronomer Jonathan McDowell of the Harvard-Smithsonian Center for Astrophysics told the outlet.

The U.S. Space Force’s 18th Space Control Squadron, which detects, tracks and identifies all manmade objects in orbit, confirmed the re-entry over the Atlantic Ocean at 8:33 p.m. PT Monday.

The doomed core passed right over New York City, Ars reported -- and if re-entry had been just a few minutes earlier, debris could reportedly have showered the Big Apple.

Instead, at least part of it fell on a town in Cote d’Ivoire, Quartz reported.

McDowell on Twitter said he could “conclude” that the objects that fell on Cote d’Ivoire “are very likely parts of the Chinese rocket stage.”

His Twitter feed shows a number of additional possible crash sites in the path of the returning rocket core, including at least one piece that damaged a house. No injuries were reported.

“Impressive how far downrange debris can get at 28000 km/hr!” he wrote.

A typical, two-stage launch will drop its first rocket into the ocean before reaching orbit, according to NASA. That’s safer than sending an enormous object into orbit that will eventually come back for an uncontrolled re-entry.

It’s also not the first time China has reportedly let its space junk fall haphazardly back to Earth -- including the time it apparently let a rocket booster drop onto one of its own villages, spewing toxic fuel and destroying at least one building, Ars reported in November 2019.

China’s space launch safety practices were so concerning to Greg Autry, a former member of the Trump administration’s NASA Landing Team, that he wrote an op-ed in Space News magazine last May urging the president and Congress to address the issue.

“On April 20, China launched the 100th mission of its highly successful Long March-3 rocket series,” he wrote at the time. “[While it] successfully lofted a navigation satellite, designated as Beidou-3I1Q, toward its geosynchronous orbit, it also littered the Chinese landscape with a collection of dangerous rocket boosters leaking toxic fuel.”

He also described a series of other launch events that resulted in “plummeting space junk” and other safety hazards.

In the U.S., the Air Force Rapid Capabilities Office is scheduled to launch the sixth test flight of its new X-37B from Cape Canaveral in Florida on Saturday, the Space Force announced last week.