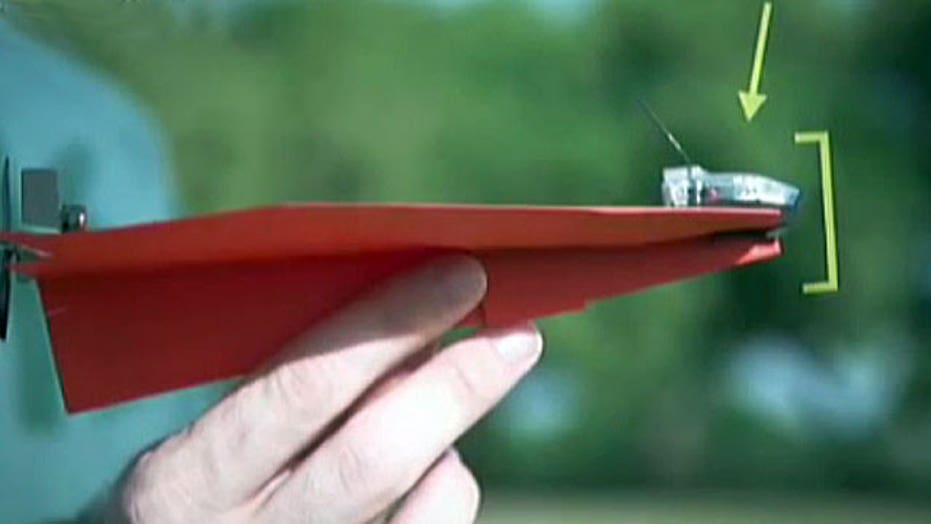 Can you turn a paper plane into a drone?

Aerial drones have been used on the battlefield and in movies, but now is the fast-growing world of unmanned aircraft expanding to paper airplanes?

Former Israeli Air Force pilot and now founder of PowerUp Toys Shai Goitein is getting a lot of attention for his “PowerUp 3.0 Smartphone Controlled Paper Airplane.”

“Essentially PowerUp is an idea that connects the homemade paper airplane to technology by connecting the airplane to your smart phone so you can literally control it through an app," Goitein told Foxnews.com.

The airplane uses a guidance-and-propulsion system powered by a dime-size battery. After attaching the kit to paper, the device connects to smartphones using Bluetooth. The app lets users increase and decrease speed along with adjusting the flight level. There is also a battery level indicator and Goitein says the airplane can fly for up to 10 minutes.

Some critics say toys like the PowerUp 3.0 are a remote-control drone. Goitein believes his device is simply a toy.

“We’re are in the ages of drones and its becoming quite popular and now we have the ‘paper airplane drone,’ honestly at the end of the day it’s a toy and it’s just for fun,” Goitein. “I don’t think this is a drone – it is not a military device or a device that can be used for any sophisticated task.”

He came up with the idea for the technology a few years ago while teaching aerodynamics and during his research had a "eureka moment" for his design.

“The initial challenge was trying to understand the architecture, create a very robust design … to convert into something that’s easy to use,” said Goitein. “One of the major challenges is to get enough thrust, power … to make it easy enough to fly.”

Goitein used Kickstarter to raise money for the toy. His initial goal of $50,000 was easily surpassed and reached over $1 million.

The company is currently accepting pre-orders for the PowerUp 3.0 with shipping to start this August.

Watch the full interview with Shai Goitein above.