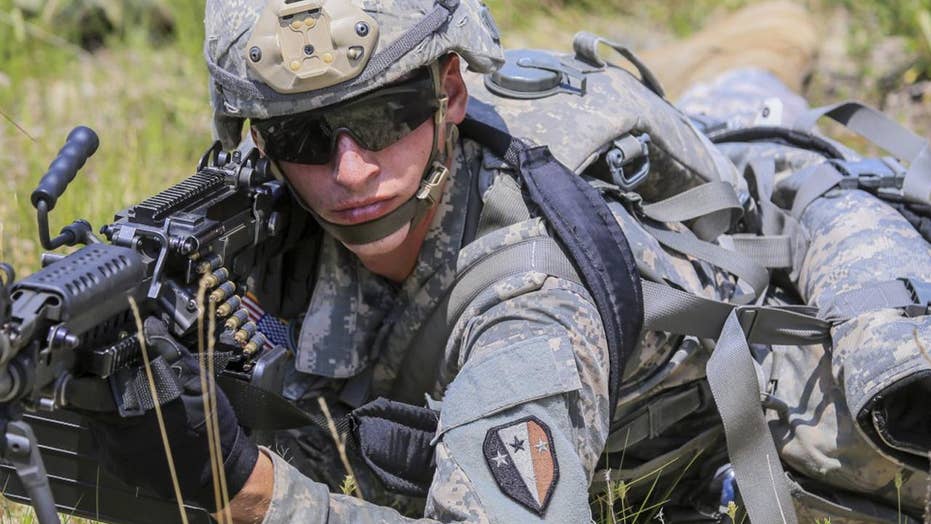 Defense Specialist Allison Barrie has a first look at the Army's new machine gun, which is made to be lighter, shoot farther, and pack the power of an M1 Abrams tank in the palm of soldiers' hands.

The Army’s new weapon will look like a light machine gun, but will put M1 Abrams Main Battle Tank-style blasting power literally at the fingertips of U.S. soldiers.

The new light machine gun will weigh less — and yet shoot farther. It should make U.S. soldiers even more lethal and enhance their speed and mobility while improving their safety in future combat.

The Next Generation Squad Automatic Rifle (NGSAR) may replace about 80,000 SAWs (the M249 squad automatic weapon). The well-known and loved M249 SAWs were already beasts — now the Army’s light machine gun is going to get even more powerful.

Armed with the NGSARs, soldiers will have the confidence of knowing the new weapon can be relied on for stopping power against sophisticated adversaries who arrive to fight in advanced body armor.

INNOVATIVE PROJECT HARNESSES LEGOS AND SMARTPHONES IN THE FIGHT AGAINST INVISIBLE, DEADLY WEAPONS

The goal is for the weapon’s chamber pressure to achieve similar levels to battle tanks. Recent conflicts have shown that currently issued weapons have not been sufficient when tackling the challenge of forces with defense innovation and access to modern equipment.

Even if a threat is about 2,000 feet away and seemingly well protected, the new weapon will blast through enhanced body armor.

Distance, accuracy, ergonomics and lethality are all expected to be improved in this new generation of weapon. Infantry will also be able to take advantage of new specially designed, harder hitting, plus lighter weight bullets.

The aim is for the NGSARs to fire bullets at pressure levels similar to those achieved by tanks when they fire. Rounds will smash through advanced adversary body armor even at a distance, allowing soldiers to accurately shoot while maintaining a safe distance from the threat whenever possible.

The Army would like the new weapon chamber pressure to be between 60 and 80 KSI (kilopound per square inch). To put that into context, the Army’s M1 Abrams main battle tank fires at that chamber pressure. Assault rifles tend to be around 45 KSI, so this will definitely be higher.

PODCAST: “NO ONE IS COMING, IT IS UP TO US” HEAR THIS NAVY SEAL’S RIVETING STORIES

How will it be different?

Currently, M249 SAW weight when empty is 17 pounds — this new weapon will weigh less than 12 pounds. The ammunition weight is also reduced. The aim is for the new ammo to be 20 percent less than an equal brass case weight.

With the buttstock down, the Army also aims for it to be 35 inches long or less. In terms of dispersion, both the automatic 14 inch, and the semi-automatic 7-inch will have an average mean radius of 400 meters (1,312 feet).

The fire control, including day and night optics, will be a maximum of three pounds. The rate of fire will be 60 rounds per minute with 3-round burst for 15 minutes without a barrel change or cook-off.

The Army is searching for a Goldilocks solution to ammo fit for the current and future conflicts. It has to travel at sufficient speed, but with enough mass to be effective against enemy forces protected by body armor. 7.62mm ammo has been proving to have too much mass and not enough propellant. The problem with 5.56mm has been the opposite — not enough mass to penetrate armor.

PODCAST: WHAT HAPPENS WHEN A GRENADE ROLLS YOUR WAY? FIND OUT WHAT THIS FASCINATING DELTA GUY DID + MORE AMAZING STORIES FIRSTHAND

Advances like this new light machine gun and new ammo for soldiers are very important. It has already been clear for quite some time that there is a need for a better solution against enemy forces protected with advanced body armor.

SAWs have been effective in combat scenarios with enemies unprotected by armor. However, there are threats from nations with advanced defense programs. If conflict with a country like Russia and China, for example, erupts, then it is vital soldiers are equipped with weapons that can stop adversaries wearing armor.

The enhanced range will also provide an advantage in these types of conflicts, as will enabling U.S. forces to move lighter and travel faster thanks to reduced weight in the new weapons.

The Army recently awarded a contract to Textron Systems for development of a functional prototype NGSAR. The company plans to base it on their Cased-Telescoped weapons and ammunition that has already achieved amazing success in remarkably reducing weight while enhancing lethality.

The new, powerful weapons could be in the hands of soldiers as soon as 2022.