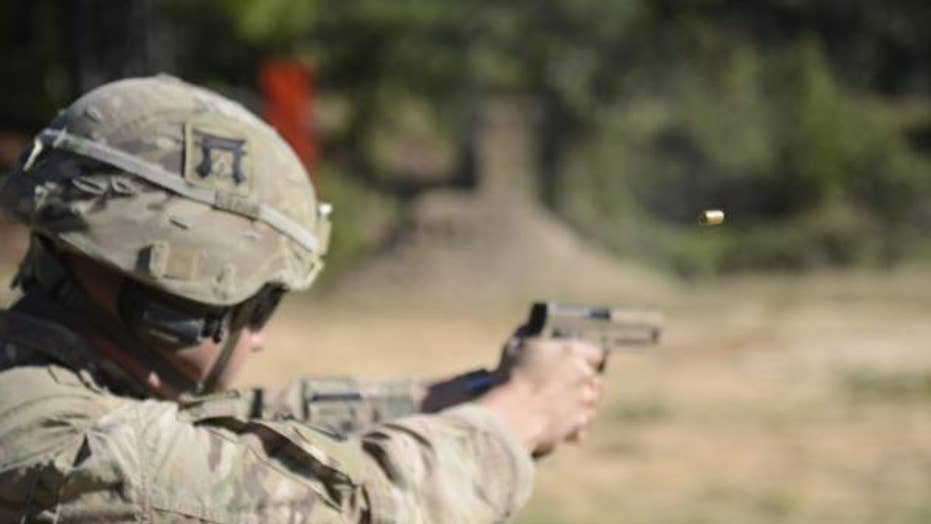 The U.S. Army gets a new war-ready M17 pistol

The M17 is a high-tech 9mm pistol that is reportedly engineered to give soldiers’ increased ability to fight in close quarters.

Earlier this year, soldiers with the Army’s 101st Airborne Division were the first to receive the services’ new high-tech 9mm pistol engineered to give dismounted infantry a vastly increased ability to fight and close with an enemy in caves, tunnels, crawl spaces, houses and other close quarter combat scenarios.

“You can close with the enemy in close quarter combat and engage the enemy with one hand. It is tough to do this with the M9,” Lt. Col. Martin O’Donnell, spokesman for the 101st Airborne, told reporters earlier this year.

The new pistol is built with a more ergonomic configuration to better accommodate the widest possible range of hand grip techniques for soldiers and enable rapid hand switching as needed in combat. The M17 is said by developers to bring much tighter dispersion, improved versatility and next-generation accuracy.

“With this weapon, you can change quickly from right hand to left hand. If you are shooting something that is not comfortable on your hand and can't get a comfortable grip, it is not as accurate,” Sgt. 1st Class Andrew Flynn, 101st Division Master Gunner, said earlier this year.

The new handguns are built with an external safety, self-illuminating sights for low-light conditions, an integrated rail for attaching enablers and an Army standard suppressor conversion kit to attach an acoustic/flash suppressor, service developers said.

When it comes to fast-evolving tactics now used in close-quarter combat, something with which Army soldiers fighting in Iraq and Afghanistan now have more than a decade of experience, an ability to maneuver with increased lethality in caves, tunnels, crawl spaces, attics or buildings allows soldiers to access life-impacting firepower more effectively - especially in “tight quarters” situations where a longer, larger rifle may not be available for use.

“This adds a whole new dynamic to close-quarter combat. A standard pistol cannot change grips or allow a soldier to switch from a right-handed shooter to a left-handed shooter. This is a great capability for us to put in play,” Flynn said.

Close quarter combat, while considered indispensable to successful counterinsurgency warfare, is also something of significant relevance to large-scale force-on-force, mechanized combat against a potential near-peer adversary. Urban warfare - from urban combat in WWII to house-to-house fighting in Hue City in Vietnam - is naturally a long-standing component of major war as well.

Power explained that the Army’s M17 acquisition effort unfolded on a massively accelerated timeframe, moving to contract within 10 months.

“We are dual arming the infantry at the position of team leader and above,” Power said.

The fast-tracked acquisition effort, which merged work from the Army Research Lab and the Army’s Armament Research, Development and Engineering Center, drew heavily from modeling and simulation to expedite development of the new weapon.

Prospects for the handgun have been well received across DoD; the Navy, Air Force and Marines are also receiving this pistol, according to a report from Military.com.

The Army has been closely coordinating with the Special Operations community regarding training and development of the new handgun, given the consistency with which close-quarter combat is utilized by SOF.

The M17 and M18 pistols are manufactured by Sig Sauer, who earned the $580 million contract to produce the weapons in January of this year.