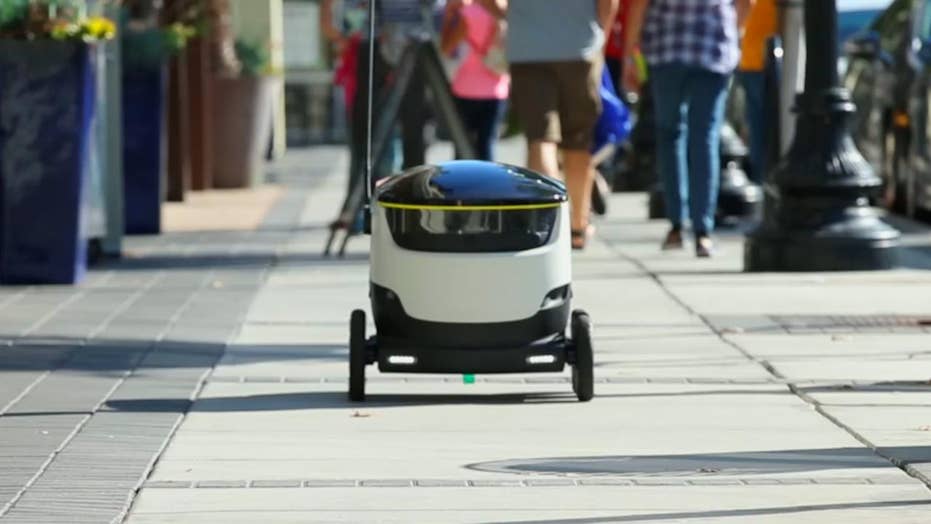 Customers can use app to order food, items and the robot will deliver it.

PHOENIX – In Arizona, robots zigzagging across a sidewalk will have the same rights as everyone else – and they will have to follow the same laws.

A new law signed by the governor earlier this month will allow delivery robots, or personal delivery devises, to operate on sidewalks throughout the state, but the robots have to be courteous and use crosswalks just like everyone else. Previously, motor vehicles, including robots, were forbidden on sidewalks.

“You don’t want to think of it as a human with rights or something like that, but it causes them to have to obey the laws,” said State Rep. Kelly Townsend, R-Mesa, who sponsored the bill. “So they can’t just whiz out into the street, they can’t run into somebody, they have to go by our current laws.”

The law makes way for delivery robots to become big business in Arizona. The robot would work like this: Customers place a food or coffee order on an app, the eatery inserts the items inside a delivery robot – and the robot goes off, on its own, to make the delivery.

"There’s all kinds of things that could be done with them (the delivery robots) that takes us to the next level,” said State Rep. Kelly Townsend, R-Mesa. (Fox News)

Townsend said she saw the robots at a conference in Boston and they intrigued her – so she wanted to bring them to her state. They can bring just about anything in minutes, from groceries to flowers to carry-out meals.

“It’s super hot and people don’t want to go out and go get their lunch or whatever it is that they need delivered,” Townsend said.

Henry Harris-Burland, a spokesman for Starship Technologies, which touts itself as the first company to build delivery robots, said delivery robots are operating in 10 cities across five countries.

“Within the app, you can see what’s available in your local area—it will be like a local marketplace of local shops and things like that,” Harris-Burland said. “You order and get a robot within 15 to 30 minutes.”

Starship Technologies was started by two of Skype’s co-founders who wanted to solve current problems and inefficiencies of delivery by using robotics technology.

“We want delivery robots to be a common site on sidewalks around the world as quickly as possible."

“We want delivery robots to be a common site on sidewalks around the world as quickly as possible,” Harris-Burland said. “It’s an emerging industry.”

The robots use sensors to navigate sidewalks and cross streets.

Yet, some fear that the technology could be dangerous as more and more robots zip across sidewalks brimming with people.

Dominick Mack, an Arizona resident, said the technology could be helpful but also has concerns.

“It’s just a little crazy because I’ve never heard anything about that and it just seems like it’s happening kind of fast—kind of like the whole autonomous car thing,” Mack said. “Out of nowhere, we see them on the street.”

Two months ago, an Uber autonomous car hit and killed an Arizona woman, leading the company to eventually shut its autonomous car operations in the state.

Townsend said the new law would pose restriction on delivery robots – it looks ahead to any issues that might arise. He said similar laws should have been in place to regulate self-driving vehicles before they hit the road.

“They came into our state, they were given a wide birth without a lot of regulation to operate and to test and the regulations were to come later,” Townsend said. “For this technology and the bill that I put forward, I wanted to have basic safety regulations, common sense regulations, so that something like this wouldn’t happen.”

But he said he did not want to over-regulate the robots, which would deter businesses from coming. And under-regulating them would put people at risk, he said.

“It has to be a common sense, healthy balance of little bit of red tape but not a lot in order to keep people safe,” Townsend said.

Harris-Burland said the difference between their autonomous robots and autonomous cars is the company’s robots are 99 percent autonomous. The company will create “call centers” where operators keep their eyes on the robots.

“Let’s see how it does—let’s give it a year and a half and see if it can deliver, you know, no pun intended."

“We never want to be 100 percent autonomous,” Harris-Burland said. “So, we have humans in the loop, and that’s not going to change. There’s always going to be…situations that a robot finds itself in where every now and again you’re going to need that human help. And those are the times where a human can take over and make those decisions.”

“They’re creating jobs but it seems like we’ll be losing more entry level jobs,” Mack said. “You probably have to be qualified to monitor the robots and do those kinds of things, whereas…a delivery job’s more entry level. So, it’s like you’re gaining jobs but you’re losing entry-level jobs that help a lot of people make ends meet.”

The law will allow delivery robot companies to roll out their bots on sidewalks for a testing phase starting in August. There’s also a sunset provision in place, where legislators in 2020 will examine how it’s been working and discuss whether or the law needs to be revised.

Arizona is the seventh state to pass this type of legislation, paving the way for robots to be a part of people’s daily routines. Some believe robots sharing sidewalks with pedestrians could be a common sight soon.

“Let’s see how it does,” Townsend said. “Let’s give it a year and a half and see if it can deliver – you know, no pun intended.”