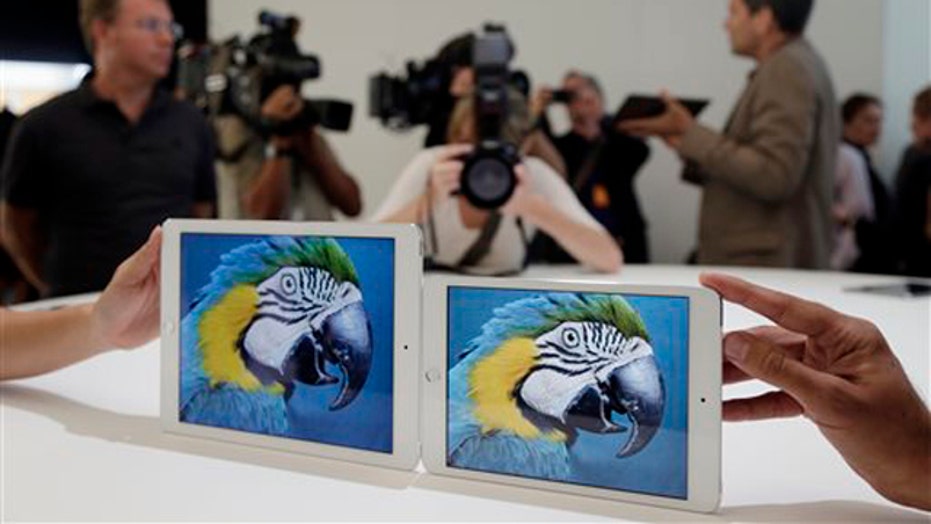 Are Apple’s new iPads worth all the fuss?

Four4Four SciTech: Apple announced the new iPad Air 2 and iPad Mini 3. Are they worth it?

Apple unveiled its new iPad Air 2, which it touted as the world’s thinnest tablet, at a launch event at its headquarters on Thursday.

The iPad Air 2 is just 6.1 millimeters thick (less than a third of an inch), compared to the 7.5 millimeter iPad Air.

Earlier, Apple CEO Tim Cook held up an iPad Air 2. “Look at how thin it is, can you even see it?” he quipped.

As rumored prior to the event, the iPad Air 2 offers Touch ID and boasts an enhanced iSight camera, which can take ‘burst’ photos for the first time on an iPad, where a series can be taken at once.

“Now, with Touch ID, you will be able to use Apple Pay for online purchases,” said Schiller.

Other upgrades include an A8X chip, which offers 40% faster performance than the A7 processor found in previous versions of the iPad. The device also features a new M8 coprocessor, which Apple says can offload work from the A8X chip for better power efficiency.

At the start of the event, Cook had described the iPad as a “simple and magical device,” explaining that the company has sold more than 225 million iPads since launching the tablet in 2010. “We have sold more iPads in the first four years than any other product in our history,” he added.

However, there was no mention of a larger-screen iPad during the presentation, despite rumors that Apple is working on a bigger tablet.

Apple also updated its iPad Mini line on Thursday, unveiling an iPad Mini 3 with Touch ID. Like the iPad Air 2, the iPad Mini 3 is available in silver, space gray and gold, but is priced from $399 for 16 GB.

The new iPads are available for pre-order Oct.17, for delivery by the end of next week.

Schiller explained that Apple is keeping the iPad Air and iPad Mini 2 in its product lineup, but is reducing pricing on the devices by $100.

While Apple's new iPads are a significant upgrade, the tablets are hardly earth-shattering, according to Jan Dawson, chief analyst at Jackdaw Research.

"There was nothing in today’s announcements which would convince someone who’s stopped using an existing iPad to buy a new one – the new iPads do the same things better, but don’t do anything dramatically new and different," he said, in a statement emailed to FoxNews.com. "For people who have found a large smartphone and a laptop sufficient, the new iPads won’t change the equation."

Also as predicted prior to the event, Apple unveiled its first iMac with Retina Display.

“There has never been a desktop display like this, it is simply stunning,” said Schiller.

"The iMac with Retina Display checks an important box for Apple’s community of creative professionals such as photographers, videographers and designers who need a higher-resolution display to do their work on a Mac," said Jackdaw Research's Dawson. "This is a marginal business in the grand scheme of things for Apple, but it’s an important segment for Apple to keep happy."

Apple also upgraded its Mac Mini with an enhanced processor, graphics, storage and Wi-Fi at the Cupertino event. Pricing for the new Mac Mini starts at $499.