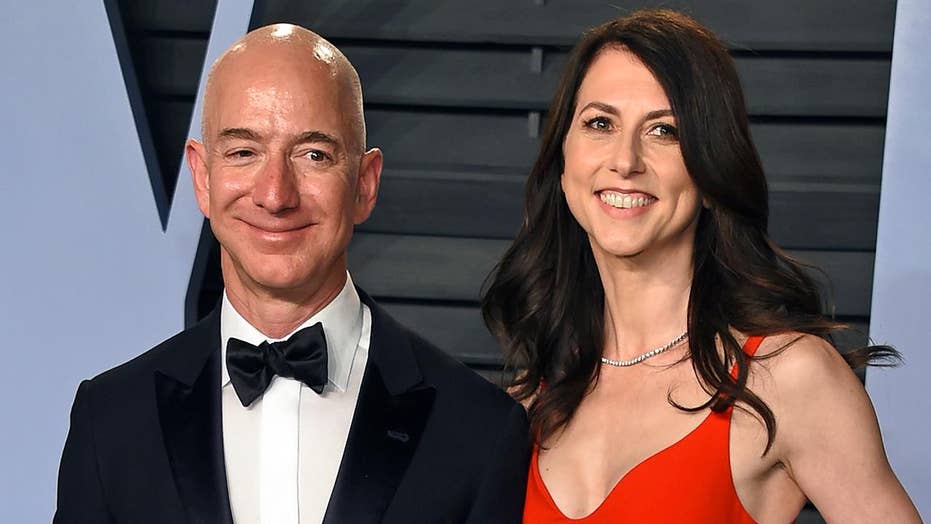 A new report states that the couple did not have a pre-nuptial agreement and a significant chunk of Bezos' fortune could be on the line; Hillary Vaughn reports from Los Angeles.

Amazon CEO Jeff Bezos announced that he and his wife of 25 years, MacKenzie, would be divorcing, leaving many to wonder what would happen to the reported $137 billion fortune of the world's richest man. A new report states that the couple did not have a pre-nuptial agreement and a significant chunk of Bezos' fortune could be on the line.

Citing "sources with direct knowledge," TMZ reports that the Bezos' did not have a prenuptial agreement, so their assets will be split, though the split does not necessarily have to be 50-50, Molly Kenny family law attorney at Molly B. Kenny told Fox News in an interview. The distribution needs to be "fair and equitable," as defined by the law. "It's not necessarily a 50-50 split, that's not what's mandated by the statute or the case law," Kenny said.

Washington Family Law Group attorney Laurie Robertson noted that the courts (assuming the divorce is filed in Kings County, where Amazon is based) are likely to consider the marriage "a long-term marriage," which could "put the parties in a similar financial state as far as property is concerned and future income wise."

Since much of Bezos' worth is tied up in Amazon stock, (according to SEC filings, Bezos owns approximately 80 million shares of the company), there are a number of ways that the split could occur and voting rights should not be an issue, given the stock is in his name, Kenny added.

"It could be negotiated, but it might not be a big issue because she hasn't been involved in the company," Kenny said. "Her interest is that the company continue to grow, succeed and be profitable. Their interests are aligned and she trusts Jeff to manage the company – just look at what he's done."

The 54-year-old Bezos has been selling stock at a clip of approximately $1 billion per year to fund his other venture, space exploration company Blue Origin. Following news of the pending split, some were worried that Bezos' ability to continue funding the company could be impacted, but that will not be the case, given it's a "community asset," Kenny said.

"My guess is they've already come up with or are starting to work on agreements and that Blue Origin will not be called into question. The ramifications of him stopping that are probably pretty significant for a lot of people."

In addition to the stock of Amazon, which recently surpassed Microsoft to become the world's most valuable company (a distinction Apple previously held), the couple also own a vast real estate empire, totaling some 400,000 acres.

Amazon did not immediately return a request for comment from Fox News.

On Wednesday, Bezos tweeted that the couple would be divorcing. “We want to make people aware of a development in our lives," Bezos wrote. "As our family and close friends know, after a long period of loving exploration and trial separation, we have decided to divorce and continue our shared lives as friends,” read the statement signed by both of them."

After the tweet, reports came out that Bezos, who in addition to being CEO of Amazon and Blue Origin, owns the Washington Post, "has been seeing" former TV anchor Lauren Sanchez.

This story has been updated to include comments from law experts familiar with Washington state statutes. Follow Chris Ciaccia on Twitter @Chris_Ciaccia