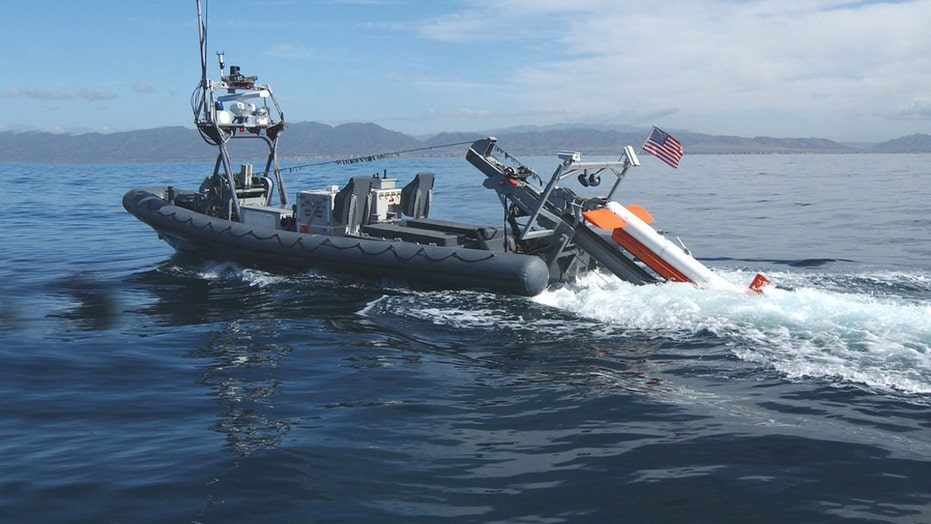 A massive surface ship and submarine maritime attack in enemy waters near a hostile territory needs to accomplish a number of dangerous operations, penetrate defended areas, identify enemy weapons and move quickly to succeed. Lives hang in the balance of time.

Any such assault, the results of which might largely depend upon the speed of undersea and surface movement, could quite likely encounter highly-dangerous minefields. These mines would be in place to explode approaching platforms or deny attackers the ability to conduct offensive operations in vital combat areas.

Enemy mine threats, increasingly becoming both more pervasive and complex, span a large sphere of operational areas to include both shallow-water littoral and deep, or “blue water” attacks. Should an attacking force come under heavy fire, enemy mines would need to be found -- and destroyed or neutralized -- quickly. Some mines are buried beneath the ocean floor, simply tethered to the bottom or merely suspended in different parts of the water column.

The growing modern mine threat is so significant, that the Navy has been fast-tracking a wide range of new countermine attack and defense strategies. The approach is focused on both littoral minefields as well as higher-tech deep water mines associated with threats posed by great powers as well, according to senior service leaders.

“We have significant gaps in our capability to defeat 100,000 Russian and Chinese mines which will not be laid in shallow water,” Maj. Gen. David Coffman, Director of Naval Expeditionary Warfare, told an audience in 2019 at the Surface Navy Association Symposium.

All of these dangerous warzone dynamics amount to the simple reason why the Navy and Northrop Grumman are engineering what developers call the “fastest” mine-hunter of all time. Called the AQS-24, the technology merges sonar with laser mine scanning and human command and control to sustain high-resolution countermine sensing and identification at speeds as fast as 18-knots.

“We are working on AQS-24C, which will bring volume search capability and greatly increase the timeline for searching. It will, among other things, provide rapid detection of moored mines,” Capt. Danielle George, Mine Warfare Programs Manager, said in January at the 32nd Surface Navy Association Symposium, Arlington, Va.

George, who said the Navy plans to deploy the AQS-24C as soon as 2020, described it as a Volume Search Sonar and an upgrade to existing “A” and “B” variants. The first two “C” variants were delivered in 2018 through a Navy deal with Northrop Grumman, George added. The existing “B” system was first fielded with MH-53E squadrons in 2017. AQS- 24B systems have “over 700 hours towed in 2019,” George said.

The AQS -24 system leverages an integrated combination of technologies to include Synthetic Aperture Sonar (SAS) and Laser Side Scanning built into a cylindrical vehicle towed through the water beneath an Unmanned Surface Vehicle (USV). USVs are quickly becoming more autonomous and can be remotely operated by a ship or shore station miles away.

“The AQS-24C is designed to keep the man out of the minefield at speeds up to 18 knots - which means it is the world's fastest minehunter. This means you can get out there, find mines in the field and get things done quickly, making the mine mission go much better,” Dave Allan, International Business Development Manager, Undersea Systems, Northrop Grumman. “Having an integrated laser for identification brings safety to the fleet. It finds bottom mines, closely tethered mines and some volume mines.”

Northrop Grumman developers explain that in order to perform this mission, there is a reliance upon sonar and laser scanning technology complementing one another; the sonar scans a wide field of view at longer ranges than the laser, pointing the laser-imaging technology toward a threat or area of interest.

“Think of it as being able to double the speed you can operate at, because we are pinging at the same rate but we go twice as fast," Gene Cumm, Director of International Mine Warfare Programs, Northrop Grumman, told Warrior Maven. "We figured out how to do that. We still get the benefits of synthetic aperture sonar. We get the benefit of going 18 knots and we maintain the benefit of high resolution. We maintain the same resolution over the full speed range of the vehicle.”

Cumm explained that the success of the system hinges upon two distinct optical windows; one optical window transmits a beam of light on a rotating shaft to emit a laser beam across the bottom, while the other optical window functions as a receiver.

“One of the mirrors has a laser light fired against it. The mirror transmits an image to the seafloor. The second mirror is looking for reflected energy from that laser light, creating an optical image of what is on the bottom,” Cumm said.