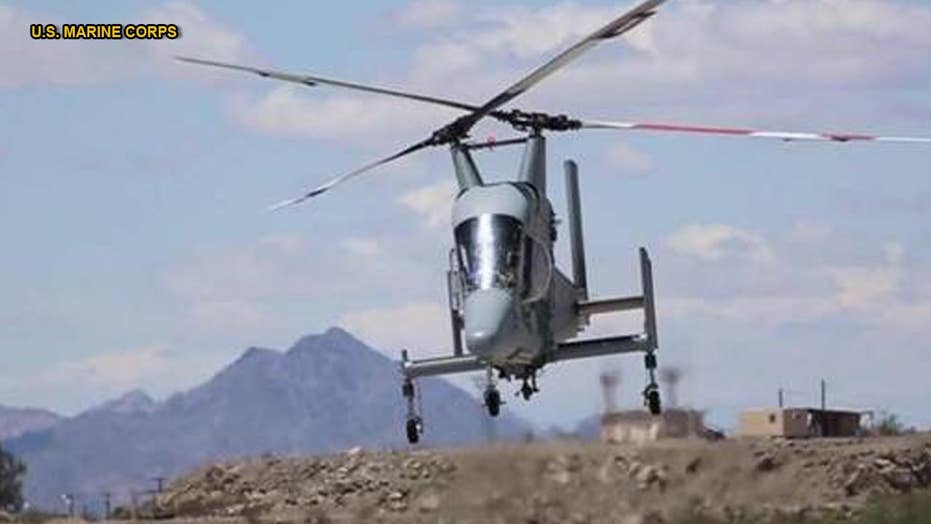 Meet K-MAX: A helicopter drone that can fight wildfires

Defense specialist Allison Barrie shares an in-depth look at K-MAX, a drone helicopter originally designed for military work in combat zones, that could reduce the risk to firefighter lives.

What if an ultra-advanced flying robot designed for extreme military missions could join the fight to combat wildfire alongside human fire crews?

The biggest wildfire in Californian history is raging, with fire officials stating earlier this week that an area almost the size of Los Angeles has been compromised.

It is actually expected to burn through the rest of August, and experts predict the escalation in frequency and scale of wildfires will only continue going forward.

Robot reinforcements, deployed for tough missions by the U.S. military in combat zones, can help save property and lives when wildfires strike the homeland.

California’s arsenal to fight fires includes a helicopter so smart that it flies itself. It is sort of like a robot and helo combined — a helicopter that functions as a drone.

Called K-MAX, the sleek-looking unmanned helicopter is 52 feet long and has a 48-foot wingspan. It travels at a top speed of about 115 mph.

This incredible aircraft is a result of a collaboration between Kaman Corp. and Lockheed Martin, combining Kaman’s phenomenal high-altitude, rugged, heavy-lift K-1200 airframe and Lockheed Martin’s mission management and control systems that give the helo remarkable mission smarts.

In 2011, K-MAX became the first unmanned helicopter to fly a resupply mission, delivering approximately 3,500 pounds of cargo to Afghanistan.

In war zones, K-MAX takes on jobs that would have otherwise put human personnel at risk. Supply-truck convoys driven by military personnel can be attractive targets for bad guys, for example, so making those deliveries by air can avoid both IEDs and ambushes.

K-MAX can also be used to reduce risk to the lives of firefighters during wildfires.

PODCAST: MEET THE FITTEST FIREFIGHTER ON THE WEST COAST AND FIND OUT ALL HIS SECRETS TO MAXIMIZING YOUR FITNESS AND POTENTIAL

Fighting fires from above

K-MAX is an autonomous platform — aka a “drone.” Drones are usually associated with surveillance (indeed, firefighters do use drones and aircraft to fly over the wildfire and gather data) but K-MAX is a heavy-hitting firefighter drone at heart, not just an eye in the sky for wildfire scenarios.

To suppress fire with water, K-MAX can use its tank or carry its giant bucket. The tank and buckets can be filled on the ground by harvesting water from nearby ponds, lakes, rivers or even a swimming pool to quickly return to the fight with more water.

This helo can also carry fire retardant to slow down the fire’s spread. CAL Fire tends to use a slurry mix consisting of a chemical salt compound, water, clay or a gum-thickening agent, and a coloring agent.

Affectionately dubbed the “air tractor,” K-MAX has a cruising speed of 91 mph and can carry 700 gallons.

From above, K-MAX can fight wildfire in different ways from cargo drops and single target water drops through to building progressive lines with its bucket.

How else can it support fire crews?

In addition to dumping water or fire retardant from the skies, the helicopter can support the firefighters on the ground in a number of other ways.

K-MAX could deploy as part of an initial attack on the wildfire. K-MAX can precisely drench the fire with its water to create a safe landing zone for fire crews. Other helicopters designed to carry personnel can swoop in behind and rapidly deposit a nine-person fire crew where the water or foam dropped, to continue battling the fire.

Wildfires are incredibly dangerous themselves, but they also rampage over terrain that was already very dangerous or tricky without the added challenge of fire.

K-MAX can access steep, rocky or unsafe areas and stamp out the fire from above using water and fire retardant so that ground fire crews do not have to put themselves at further risk in that dangerous terrain.

Crucially, the smart helo can also be deployed to resupply fire crews. All on its own, the drone could run missions to deliver supplies to multiple fire crews at four different locations using its four-hook carousel. Each hook can be activated independently.

Once deliveries are complete, K-MAX returns to home base — all during a single flight and with minimal ground operator oversight. And it can do all this by itself thanks to its ultra advanced “autonomy.”

Imagine if a fire crew is in a remote location and cut off from road supplies. Teams can be out for days   ̶ if not weeks   ̶ bravely combatting the fire with only what they can carry to eat, drink and fight fires. Aerial delivery like this can be crucial and save lives.

PODCAST: HEAR DIRECTLY FROM A BRAVE CALIFORNIA FIREFIGHTER THE REAL STORY ON FIGHTING WILDFIRES AND TERRORISTS IN THE DECEMEBER 2 ATTACK

How does K-MAX work?

K-MAX can autonomously fly its own missions day or night, making precise deliveries on its own as well.

A pilot can also jump into the single cockpit and fly it, and a third option is to be flown remotely by a fire response ground controller.

At the drop site, the drone or ground controller can maneuver the aircraft to perform a precision delivery of water or fire retardant.

K-MAX is designed to excel in challenges like the high temperatures of wildfires. The helo has twin counter-rotating, intermeshing main rotors instead of a tail rotor drive system. This puts all the engine power directly to the main rotors to enhance lift performance, maintaining performance in the intense heat.