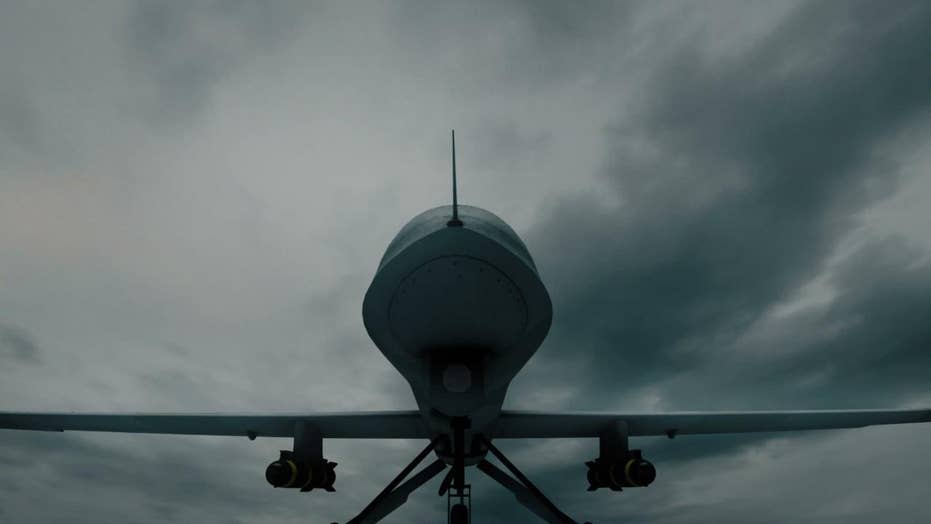 An elite drone and attack helicopter task force is still hunting the Taliban in Afghanistan.

Attack drones, fixed-wing surveillance aircraft and Apache helicopters continue to patrol the Afghanistan skies to find and destroy enemy targets and weapons in the austere, mountainous terrain of a war-weary country still immersed in more than 15-years of combat.

When an Apache attack helicopter 30mm Chain Gun fires on an enemy target in Afghanistan, the strike is often a result of a complex mix of interwoven variables -- to include networked drones, fixed-wing intelligence aircraft and helicopters coordinating real-time video feeds with target analysis and aircraft-mounted electro-optical sensors.

Most of these kinds of offensive military operations, still going on in Taliban-occupied areas of Afghanistan, can be attributed to a decade old elite unit referred to as Task Force ODIN -- Observe, Detect, Identify, Neutralize. ODIN is a precisely choreographed attack force combining medium and low-altitude drone sensors with fixed-wing aircraft intelligence analysis and nearby Apache helicopters. In effect, targets are found by overhead cameras and sensors, analyzed by combat engineers in the sky and sent via satellite or other networks to ground-based military commanders…..leading up to what becomes exact targeting -- and then..attack.

Despite the longevity of the Afghan war, Task Force ODIN has been extremely active and successful over the past year, according to Lt. Col. Jarred M. Lang, the A11 Task Force ODIN (Observe, Detect, Identify, and Neutralize) commander and 206th MI (Military Intelligence) Bn. Commander.

According to an April 17 report in the Fort Hood Sentinel newspaper, Lang told his unit that over the past year… “You detected and neutralized more than 700 enemy combatants in conjunction with supported units, and directly eliminated over 250 enemy combatants through organic lethal strikes.”

The special attack force functions according to a specified concept referred to as “layered operations.” Apaches receive organized, processed combat attack information from higher-flying fixed-wing surveillance planes. Working in a coordinated fashion, the air assets can not only launch key attacks but also perform indispensable ISR missions. For instance, Task Force ODIN is well positioned to quickly identify the location of incoming enemy rocket and mortar attacks, which can alert vulnerable target areas about the prospect of additional attacks and also provide crucial targeting information for offensive assets able to destroy the origins of enemy fire.

ODIN’s specially-configured attack units originated in Iraq more than a decade ago before migrating to Afghanistan; it consists of fixed-wing aerial surveillance planes -- such as re-engineered militarized King Air 300 planes -- drones such as Army Shadows and AH-64 Apache helicopters. ODIN, created in part and led by former Army Vice Chief of Staff Gen. Richard Cody, is responsible for killing thousands of insurgents in Iraq. The ODIN program is managed and run by the Army, with contractors manning the planes.

One such firm, called MAG Aerospace has been tasked with operating the aircraft, surveillance technology and intelligence analysis in the sky. Operating as part of the Army’s Medium Altitude Reconnaissance and Surveillance System (MARSS) program, the aircraft uses infrared and long-range electro-optical sensors to scan the terrain below, identify items of significance and then perform the analytics needed to organize and disseminate the intelligence information. Since its inception, MARSS has been complemented by a more advanced variant with similar mission requirements, called EMARSS - for Enhanced Medium Altitude Surveillance System.

MAG increased its participation with ODIN in 2016, following a 2015 Army contract win. Among other things, MAG was able to help address a pressing Army pilot shortage - by manning the planes with trained engineers, analysts and aerial surveillance experts.

“We started in January 2016. For the first time in the history of this program, we fully manned the program for years,” Leonard Loller, MAG Program Manager, told Warrior. “The services have had trouble manning their cockpits.”

Many of the MAG professionals and experts are thought of by fellow employees as “unicorns,” a term to connote the rare blend of experience and expertise needed to perform the intelligence analysis

Operating the aircraft requires an intricate mix of skill and experience, as the mission seeks to quickly integrate a range of information and attack “nodes” across the task force. Some of the specific systems used include the operation of Synthetic Aperture Radar (SAR) which analyzes the return signals of electromagnetic “pings” sent to the ground to establish an image or “rendering” of the terrain below. Also, along with wide area camera surveillance, the fixed-wing surveillance planes also draw from a specialized sensor called Ground Moving Target Indicator (GMTI), a technology which helps manned aircraft locate enemy movements below.

MAG engineers explain that these sensors are able to find and track multiple targets simultaneously, analyze information and send target data to drones and Apaches. Drone surveillance often described as a “soda straw” or focused look at a narrower field of view, are intended to operate in tandem with wide area surveillance by sharing relevant real-time video information. The larger sensors, MAG experts describe, are referred to as “Wide Area Persistent Stare,” -- they gather video data which is sent to the back of the plane and “exploited” by intelligence experts.

“Every day we fly a different kind of mission,” Loller explained.

ODIN transitioned from Iraq to Afghanistan as a result of a fast-tracked Army effort, according to those supporting the operation

“The Army needed ISR programs and aircraft were not available. They went to the civilian market and bought Kind Air 300s. They brought them to a system integrator where they were stripped down and integrated into MARSS aircraft supporting ODIN and some special operations,” Brian Tachias, Senior Vice President, MAG Huntsville Business Unit, told Warrior.

MAG has more than 300 employees in Afghanistan supporting ODIN.