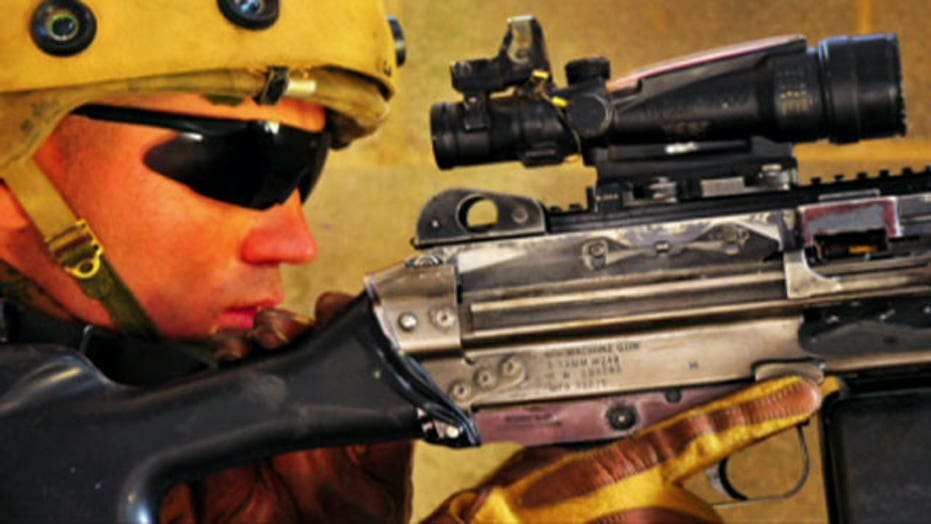 Innovators at the Office of Naval Research work on tech you would expect, such as scalable body armor and futuristic lasers. But here are five pieces of tech that may be a surprise -- inventions just revealed at the Modern Day Marine exposition held at Marine Corps Base Quantico in Virginia.

From chameleon-like shades that change color in response to the environment through to a blanket that could power night-vision devices, these smart technologies are destined to be crowd pleasers.

Chameleon-like smart shades
A retired Navy SEAL submitted a request for fast-tint eyewear that would instantly transition from shades to clear lenses in reaction to dark conditions.

Made by TechSolutions with Crane and Alpha Micron, these lenses not only shield a Marine’s eyes from ballistic impact, they automatically shift when a warfighter is on the move through different light conditions.

When she works indoors the lenses are clear; they shift to blue or amber for low-light or dusk and become dark gray in the daytime. And they provide 100 percent protection from ultraviolet A, B, and C rays as well.

This revolutionary single-lens technology can be used for both goggles and glasses.

How does it work? These shades have an auto-sensor that reacts to the environment and works out the right lens color, transitioning in less than half a second. The lens itself is made of liquid crystals with customized dyes. Electric charges trigger the crystals in the liquid to reorient and change color, although the lens color can also be changed manually.

Fast-Tint Protective Eyewear has more than 55 hours of battery life and can be recharged with a USB cable.

This smart tech meets ANSI ballistic standards, too: By wearing a pair, a Marine will have continued protection without needing to stop, remove, and replace lenses.

Fit for range of terrains like urban, desert and mountains, the tech can withstand hot and cold-weather environments and the electronic components are robust enough to resist humidity and salt fog corrosion.

The unit will give Marine Corps drivers better image contrast and detail day or night.

It takes video continually from the DVE sensor and delivers better analog video to the display.

Downrange, the tech means drivers can focus on the terrain and not have to regularly adjust the display to fix the contrast and brightness.

The tech mounts to the side of a weapon and includes a LED display screen and range knob to ensure the right weapon orientation and improve the probability of a first-round hit.

A Marine can take the user menu and choose ammunition and a particular weapon system configuration, and the sight will give the right aiming cues.

By replacing many current power options, it reduces the weight and battery bulk that warfighters currently need to carry to power their gear.

One PMK can dramatically reduce the weight from the average 50 pounds of specialized chargers and related equipment to 9 pounds.

The one-pound Soldier Power Manager charges all standard batteries from almost any energy source from vehicles through to solar.

Its charger and cables can be carried in a soft roll case.

Power-generating blankets
In another power advance, the Naval Research Laboratory is also producing a high-powered solar blanket that could provide power for the dismounted soldier.

Lightweight and flexible, it could provide a smart replacement for warfighters lugging around heavy batteries.

Researchers are developing crystalline, highly efficient, solar cells that are lifted off the growth substrate and laid onto the blanket to give it a high power output.