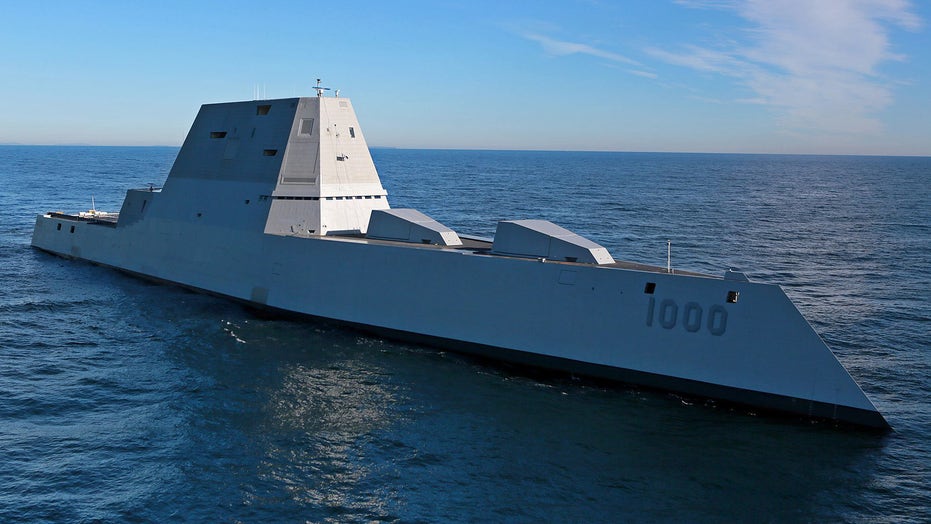 Can a massive surface destroyer, armed with Tomahawk missiles, deck-mounted guns, sensors, antennas and heat-generating onboard electrical power, truly be considered stealthy? Surely, tall, vertical masts, hull-mounted sensors and protruding antenna could never be a low-observable ship, yet performing these missions comprised the technical starting point from which engineers launched into building a first-of-its-kind stealth warship.

Stealth attributes are just one of a number of defining characteristics of the much-discussed Zumwalt class warships, perceived by many to represent the beginning of a transformational pivot into a new generation of warfare -- including laser weapons, artificial intelligence, expanded networking, advanced sonar and electric-drive.

All three high-tech Zumwalt destroyers are now “in the water,” Capt. Kevin Smith, Zumwalt-class Program Manager, said at the Navy League’s Sea, Air, Space Symposium in April of this year. Smith detailed how each of the three new destroyers are at various stages of development -- as of several months ago in April of this year. The first-in-class USS Zumwalt is preparing weapons on its way to final delivery later this year. The Zumwalt is now test-firing its weapons systems, completing an operational scenario transit through Alaska and Hawaii and advancing tactical training for the crew, as it prepares for its maiden deployment. The activation, which involves refining weapons, sensors and networks, is a vital step towards launching the destroyer for war.

“The crew has been learning a lot as far as combat activation, a lot at-sea and a lot at its home port in San Diego. The maturity of the computer system has come a long way and is now at a higher level of completion,” Smith said in April.

The second, PCU Michael Monsoor (DDG 1001), has begun combat availability and number three -- PCU Lyndon B. Johnson (DDG 1002) -- was christened in April of this year, on its way to a planned Hull, Mechanical and Electrical (HM&E) delivery next year. The Johnson is now 85 percent built and achieved “float-off” in December of last year.

“We’re now going through ship completion, which includes running cable, completing compartments and getting into the activation. We will energize high voltage in September,” said Smith.

Smith explained the rationale for the “split-delivery” acquisition of the three ships, which follows a path from commissioning, through a transport to a home port of San Diego for further combat preparation. While there are some differences between the three ships, such as the use of a steel deck house for the Johnson, the developmental trajectory for all three ships has been interwoven.

“All the lessons we learned in the 1000 we have rolled into the 1001, and we are in the process of rolling everything into the 1002 that we learned from the 1001,” explained Smith.

Technology of these platforms, loaded with heavy firepower, resides in advanced computing, potential for electrical power, potential for future weapons integration and, perhaps most notably, stealth. Just how possible is it to engineer a large destroyer that is significantly less visible to enemy radar?

Typically, when people think of the term stealth, they are drawn toward images of fighter jets or sleek bombers. However, it appears some of the central technical applications of that which constitutes “stealth” seem apparent in the Zumwalt destroyers.

Several years ago, during an earlier phase of the Zumwalt’s development, news reports, many of them citing Naval Sea Systems Command, claimed the Zumwalt looked like a small fishing boat during radar testing. When viewed through the lense of how stealth works, this result may be exactly what is intended. While a destroyer as large as the Zumwalt would be very unlikely to generate “no” return signal to enemy radar or sonar, its configuration seems designed to produce a rendering quite different than what it actually is -- confusing enemies. This is, in concept, fully aligned with the intended effect of Air Force fighter jets a stealth bombers; they are designed to appear like a "bird" or "insect" in the air to enemy radar.

Taking a look at the external shape of the Zumwalt, the ship lends itself to a discussion of some of these fundamentals regarding stealth properties. First and foremost, when compared to other surface ships, its shape is, of course, entirely different. There are fewer edges, a conspicuous absence of protruding structures or varied contours and a flat side, seamlessly attached to the upper deck of the ship, on a straight, yet slightly angled flat linear surface. Instead of multiple sharp, intertwined steel panels and structures, supporting an outward-facing radar system, the Zumwalt’s front exterior shows only a few rounded edges to achieve its requisite shape. Its much-discussed, wave-cutting Tumblehome hull is more narrowly built than existing destroyers, making it less detectable to enemy sonar.

Differently-shaped, external structures, with sharp angles, pointy edges and extending vertical designs naturally offer many more areas off which radar pings can bounce. Low observability, by extension, happens when radar has fewer return electromagnetic pings with which to create a rendering of the object. Since electromagnetic pings travel at the speed of light -- a known entity -- and time of travel can be determined, a computer algorithm can determine the shape, size and distance of an enemy object - if there are enough return signals. Acoustic pings operate within the same conceptual framework, simply using sound instead of electricity. Accordingly, Zumwalt engineers sought to build a ship able to elude radar and sonar detection.

Most current destroyers, for example, have multiple deck-mounted sensors, weapons systems and angular staircases visibly positioned on the deck of the ship; none of this can be seen on the Zumwalt. Some of the Zumwalt’s weapons, for instance, are housed in what appear to be rounded, cone-like structures. Simply put, the fewer edges or identifiable shapes you have, the lower the possibility that electromagnetic signals will effectively deliver an accurate picture of the object.

Another apparent technique is the use of antennas. A DDG 51, for example, has multiple antennas, sensors, masts and other narrow, vertical structures with definable contours. The Zumwalt does not. In addition, the Zumwalt’s electric-drive propulsion system not only helps generate more onboard electrical power for weapons, but is also much quieter -- giving the ship a smaller signature for overhead enemy sensors and even submarines. Interestingly, there are other “conceptual” parallels between the Zumwalt and stealthy fighters jets. Looking at the ship’s exterior, there are very few observable sensors, weapons, antenna or other structures, something which aligns with engineering techniques used to build stealth aircraft. Many sensors and antenna in stealth aircraft are, by designed, embedded or woven “into” the skin of the aircraft. There are no visible “seams” or shaped “bolts” holding parts of the ship together. With these concepts in mind, it would not seem at all surprising if many of the Zumwalts sensors, radar, sonar and other key technologies were deliberately woven into or buried in the hull or exterior of the ship. Following this technical reasoning, it makes sense, for instance, that an Air Force stealthy B-2 would not only have internally buried engines to lower its heat signature -- but also have a rounded horizontal shape with no hard edged, steep angles or perpendicular vertical structures more recognizable to enemy radar. Finally, stealth aircraft are known to use specially-engineered radar absorbing materials. While there may not be a lot of specifics regarding about the exact materials used for the Zumwalt, understandably for security reasons, it would certainly make sense if it were built with a radar absorbing exterior.

Smith also spoke at length about the ship's growth potential or technical ability to house more electrical power and "surge" capacity for new weapons such as lasers. The ship's Integrated Power System, electric drive, computing system and 78 megawatt generator all create the conditions for rapid integration of laser weapons. This is quite significant for stealth designs because lasers not only bring a host of new combat attack advantages, but they are also entirely silent. They give off a much different and less detectable signature than missiles do.

So, while on the surface, the notion of a stealthy destroyer might seem to be a contradiction in terms, Zumwalt engineers appear to have been using numerous stealth techniques, which, while not intended to make the ship invisible, are designed to confuse enemy sensors and wage war while much less detectable to the enemy.