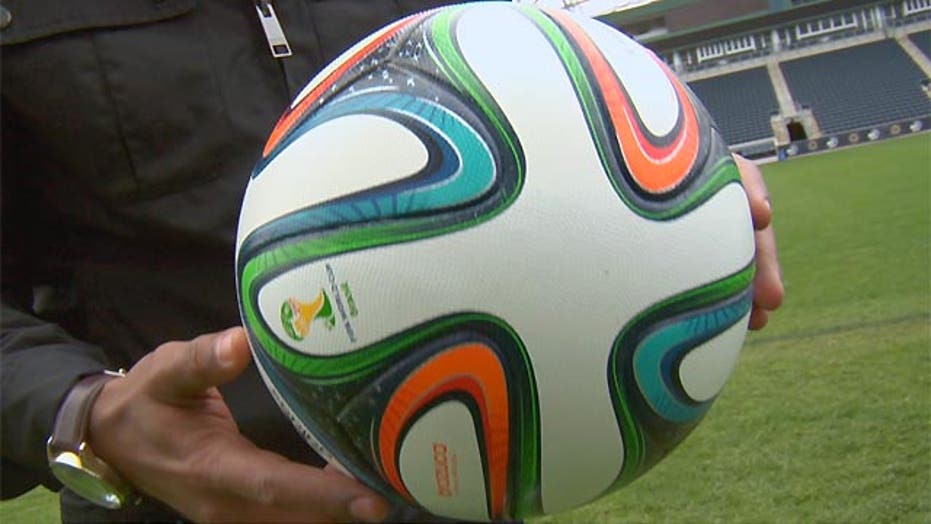 The Brazuca ball – the center of attention at the World Cup

Soccer’s worldwide popularity is due in large part to the simplicity of the equipment. All you need to play is a few friends and a round object that resembles a ball.

Throughout the sport’s history people have used wadded up pieces of rubber, onions, balled up newspaper tied together with yarn or even actual soccer balls so frayed that the original hexagon patters is all but worn off.

Each of these has its own idiosyncrasies—a difference in the way they feel or handle or fly.

So when players take the pitch at the start of the World Cup on June 12, what will they find out about the official World Cup ball, the Brazuca?

The ball is touted by its manufacturer, Adidas, as the world’s most technologically advanced soccer ball, and its designers are looking forward to seeing the best players take it through its paces during the World Cup.

“This will be the most visible icon in this tournament,” said Udos Mueller of Adidas technical innovations division. “It has been tested so intensely by players at all levels, and the players were amazed.”

Lionel Messi, Iker Casillas, Bastian Schweinsteiger, Zinedine Zidane and players from teams in Brazil, Italy and the United States all had a hand (or would it be a foot?) in helping to test and design the Brazuca.

"Adidas has created an incredible-looking ball fitting for a tournament as big as the FIFA World Cup,” Brazilian national team and FC Barcelona defender Dani Alves said. “Most importantly it plays well on the ground and in the air. I'm sure all the players will love it. It's increased my levels of excitement even further and I honestly cannot wait for the opening game."

There were complaints at the 2010 World Cup about Adidas’ Jabulani model. The ball had a tendency to not spin, which caused it to move uncontrollably in the air like a knuckleball—goalkeepers hated it and strikers said it was hard to control.

So this time around, the Adidas team has added 50,000 tiny bumps to give the ball better grip, improved its aerodynamics by constructing its cover out of six geometrically identical panels and made the ball more durable by improving the seal between the panels.

“We have one panel six times on the ball which leads to better accuracy and also a better seam geometry which then optimizes the flight characteristics of the ball,” said Matthias Mecking, the director for soccer of Adidas’ business unit.

Major League Soccer and a few other leagues have been using the Brazuca in their league games ahead of the World Cup, and offensive players said that the ball took a few days to get used to. Once they found the ball’s “sweet spot,” however, they felt confident they could find the back on the net.

On the other hand, some goalies who have played with it say that the Brazuca and its colorful design are a nightmare to deal with.

“[With] the color scheme, it can be difficult picking up the ball,” Philadelphia Union goalkeeper Zac MacMath told Fox New Latino. “Especially at a high speed, it can be moving and you don’t know which way, if it’s spinning left or spinning right.”

What does that mean for the Cup?

“In the replays, on a lot of goals where the ball is moving a lot and the goal keeper looks a little bit lost, you’ll know that’s because of the ball,” MacMath said. “I’m sure the goalkeeper’s going to be turning his head back in the net and being like, ‘What am I supposed to do about that?’”