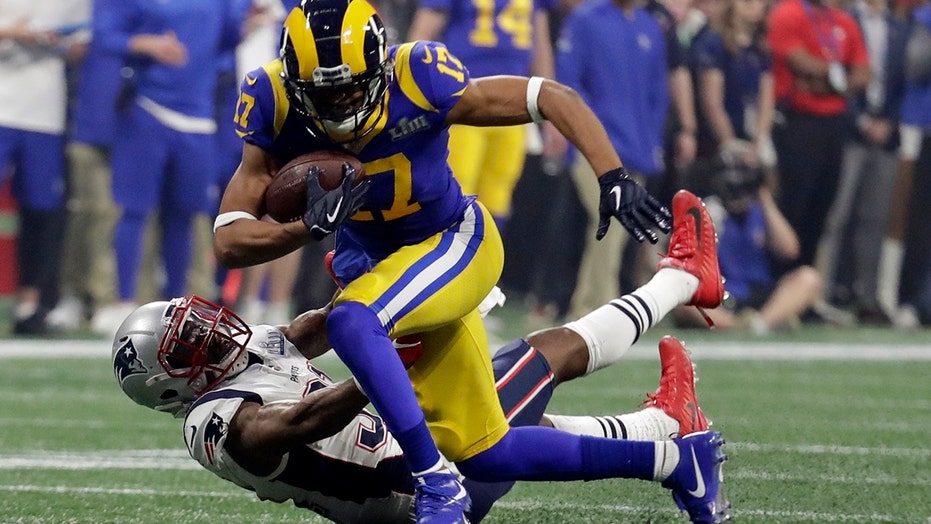 A person with knowledge of the deal says receiver Robert Woods has agreed to a four-year contract extension worth up to $68 million with the Los Angeles Rams.

The person spoke to The Associated Press on condition of anonymity because the Rams announced the deal Friday without revealing the financial terms.

Woods' extension includes a guaranteed $32 million, and the veteran receiver is now signed with his hometown team through the 2025 season.

Woods is coming off three highly productive seasons for the Rams, racking up 3,134 total yards receiving and 284 yards rushing with 15 total touchdowns. He has been a major, versatile component of Los Angeles' prolific offense under coach Sean McVay since they joined the franchise together in 2017.

The 28-year-old Woods was already signed through 2021 in a deal that pays him $9 million next season, but the Rams repeatedly said they intended to increase Woods’ pay to a level commensurate with his achievements and leadership. Los Angeles already gave a bump to Woods two years ago on the five-year, $34 million free-agent deal he signed when he left Buffalo, which drafted him out of Southern California in 2013.

Woods led the NFL last season with 577 yards after the catch while racking up 1,134 yards receiving on a career-high 90 receptions. While he has never been selected for a Pro Bowl, Woods is a prolific, durable wideout who has ranked among the NFL's top dozen receivers in catches and yards receiving since he joined the Rams.

Woods started off the new season with six receptions for 105 yards in the Rams' 20-17 victory in the inaugural game at SoFi Stadium last weekend. He had a 20-yard catch on the first play from scrimmage at the Rams' new arena, and he later added a 14-yard run in his regular role as a ball carrier on jet sweeps.

Woods is the third major contributor to agree to a contract extension in the past two weeks with the Rams, who rarely hesitate to pay their top players generously. Cornerback Jalen Ramsey got a five-year, $105 million extension last week, while Woods’ counterpart, fellow 1,100-yard receiver Cooper Kupp, got a three-year deal worth $48 million.

Woods’ deal was announced after the Rams’ media availability Friday, but Kupp reacted to it on Twitter with a photo of the two receivers along with: “Iron x Iron! Sharpening never stops! Pumped for my guy. Best I’ve been around.”

After Kupp's deal was solidified last week, Woods and McVay both expressed optimism that an extension could be reached for Woods before the Rams (1-0) play their second game of the season at Philadelphia this Sunday.

“(McVay) kind of just reassured me that this deal would be taken care of this week, and (I should) really have no other concerns," Woods said Thursday. “We take each other’s word, we believe in it, we go forward and we’re locked on to get this thing done and look forward to Philadelphia.”

With Woods, Kupp and quarterback Jared Goff locked down in long-term deals, the most important parts of the Rams' passing game are cemented for the foreseeable future. While some NFL teams worry about salary cap eventualities and constant upgrades, the Rams are more interested in making their already successful players happy.

“Robert and Cooper have been pillars of what we've done the last few years,” McVay said.

In a two-year span, the Rams have given out the biggest contracts in NFL history at the time for a quarterback (Goff), a running back (Todd Gurley), a defensive player (Aaron Donald) and a defensive back (Ramsey). Los Angeles had to release Gurley last spring before his extension ever kicked in, and they traded receiver Brandin Cooks last spring just two years after signing him to a hefty extension.

His NFL career started slowly during four consecutive non-playoff seasons with the Bills, who drafted him in the second round. He never topped 700 yards receiving in Buffalo, but the Rams brought him home as a free agent one year after the franchise itself returned to Los Angeles.