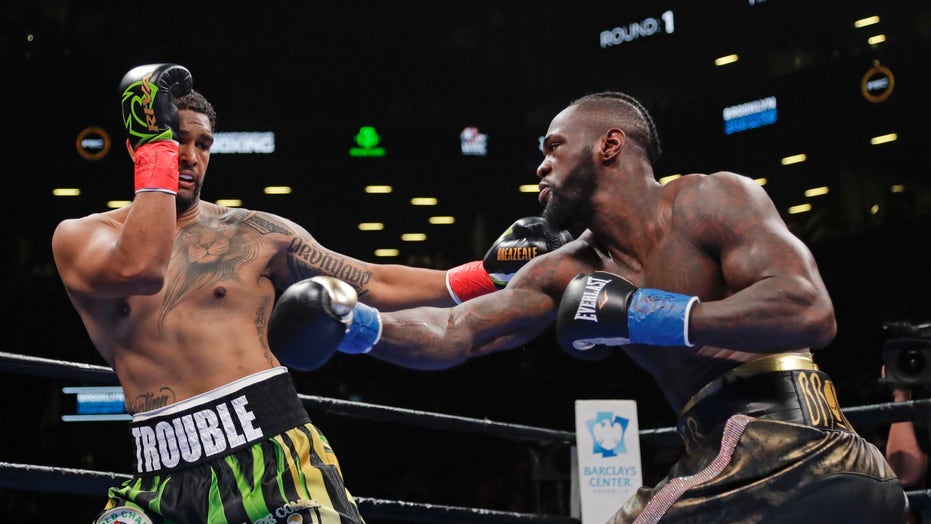 Deontay Wilder made it look easy in his first round match on Saturday.

The professional boxer known as "The Bronze Bomber" -- because of his bronze medal in the 2008 Olympics -- knocked out Dominic Breazeale with an overpowering right hand in his first round WBC championship boxing match in New York.

Wilder had already hurt his opponent with a right to the head earlier in the match, but Breazeale seemed to have recovered from that. His second right, however, was devastating.

"When I hit him with the right hand the first time, his body language changed," Wilder told The Associated Press.

Dominic Breazeale, left, evades a right from Deontay Wilder during the first round of the WBC heavyweight championship boxing match Saturday, May 18, 2019, in New York. Wilder won in the first round. (AP)

Breazeale was trying to get up as referee Harvey Dock counted him out at 2:17 of the round.

"There's been a lot of animosity and a lot of words that were said and it just came out of me tonight," Wilder said.

Wilder (41-0-1, 40 KOs) was coming off his draw against Tyson Fury in December, the first fight of his pro career that wasn't a victory. He wanted a rematch with Fury or a unification match with fellow champion Joshua, but settled for a mandatory defense of his WBC title when those couldn't be made.

He ended it quickly, finishing off Breazeale (20-2) after being pushed hard in each of his last two fights.

WILDER'S COMMENTS ABOUT OPPONENT'S DEATH 'AGAINST THE SPIRIT OF OUR SPORT,' WBC PRESIDENT SAYS

Wilder weighed in at a little more than 223 pounds, a gain from the 209 he was at for the Fury fight, but still well below the 245 he set as a goal after feeling he was too small in that bout, in which he dropped Fury with a huge combination in the 12th round but had to settle for the draw when the challenger was able to get up and finish the fight.

Deontay Wilder, right, knocks down Dominic Breazeale during the first round of the WBC heavyweight championship boxing match Saturday, May 18, 2019, in New York. Wilder won in the first round. (AP Photo/Frank Franklin II)

"This was a situation where he landed the big right hand before I did," Breazeale said, according to The Associated Press. "I thought I was going to come on in the later rounds. I'll be back and go for the heavyweight title again."

Wilder easily put aside the letdown of not fighting Joshua or Fury again because of his anger toward Breazeale over an altercation involving family members at an Alabama hotel in 2017. At one point, he touted his ability to kill a man in the ring, remarks that were condemned by the WBC president.

He looked like a picture of peace as he carried his young daughter into the arena about three hours earlier, but was back to making his case as boxing's baddest man once the fighting started.