The U.S. women’s national soccer team received a one-of-a-kind foosball table featuring 3D-printed replica of each player before jetting off to the FIFA Women’s World Cup.

In less than a week, the U.S. women’s national soccer team begins its mission to win a fourth FIFA World Cup trophy, playing against the best competition in the world.

Ahead of their departure for the month-long tournament in France -- which kicks off Friday -- the team had a media-filled couple of days in New York City where they received a one-of-a-kind gift from Fox Sports.

A new foosball table, with each manikin attached to the metal bars a near-perfect replica of the 23 players on the U.S. team in their respective jerseys was unveiled at the Twitter offices during the squad's media day last month.

The team played a pickup foosball “match” with several players hitting the table and scoring some goals – which they hope foreshadows what awaits them in France.

Before heading off, the players, who each took home their respective replica manikins, asked that the table be gifted to them.

Former U.S. soccer player Alexi Lalas, who is an analyst for Fox Sports, joked that if they bring back the trophy, they will ask for a forwarding address.

Earlier that day, the team said they had no intention of leaving France without the World Cup title.

"I think it’s going to be a remarkable world cup. The level of competition four years on from the last one has exponentially increased,” said coach Jill Ellis, who is missing five of the players she fielded at the last world cup finals. “Different teams are now rising and it’s going to be a very open world cup and we are excited going out there and attacking it.” 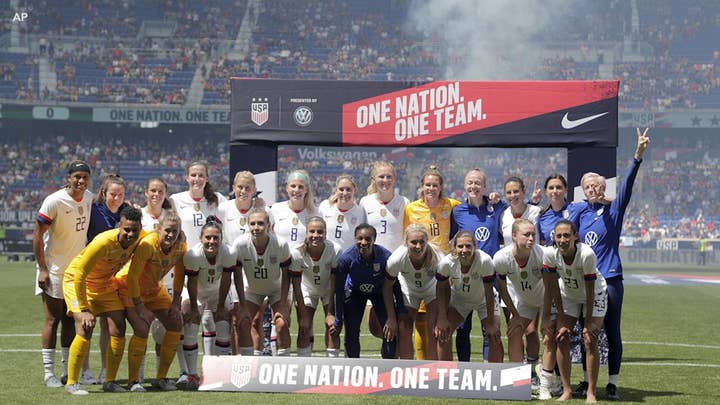 The tournament begins June 7 with an opening match between France and the Korea Republic in Paris. The American women begin their quest for back-to-back titles when they play Thailand on June 11.

The tournament will be broadcast in the U.S. exclusively on Fox Sports. Fans can watch live on FOX, FS1 and the Fox Sports App. The U.S. soccer federation has also launched its own app, which it says will bring fans closer to the action.