United States' team celebrates with the trophy after winning the Women's World Cup final soccer match between US and The Netherlands at the Stade de Lyon in Decines, outside Lyon, France. (AP Photo/Alessandra Tarantino, file)

The pay analysis--which U.S. Soccer president Carlos Cordeiro said was conducted by U.S. Soccer staff and reviewed by an accounting firm--will add fuel to a complex debate over how the federation has compensated its championship women’s national team.

The federation has faced increasing pressure from the public and Congress over the issue, especially since the U.S. women successfully defended their World Cup title earlier this month.

Corderio said the federation’s analysis showed that U.S. Soccer paid female players $34.1 million in salaries and game bonuses from 2010-2018, while paying the men $26.4 million during the same period. Women’s team members receive salaries plus bonuses and the men receive only bonuses, though larger ones, according to the letter. 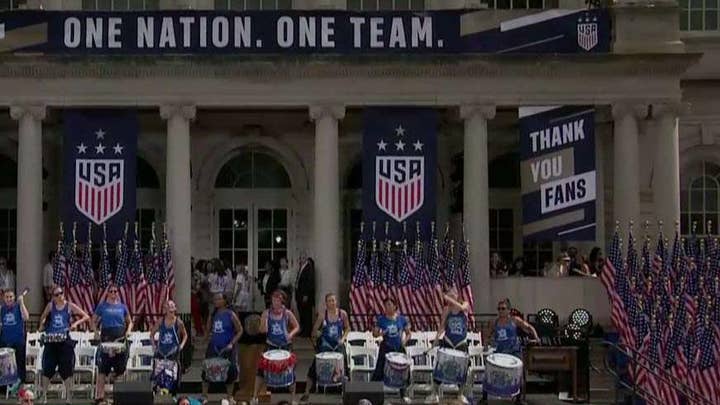 The compensation structure for the two teams is different because of their respective collective-bargaining agreements and not because of gender, Cordeiro wrote.

Molly Levinson, a spokeswoman for the players, called the letter “a sad attempt by USSF to quell the overwhelming tide of support the USWNT has received from everyone from fans to sponsors to the United States Congress.”

Levinson said the federation’s numbers “inappropriately include the NWSL salaries of the players to inflate the women’s players compensation. Any apples to apples comparison shows that the men earn far more than the women.”

Cordeiro wrote that the federation has mostly refrained from commenting on the March 8 lawsuit and pay issues to focus on the World Cup, which kicked off June 7.

“Just as our WNT players have shared their perspective, I strongly believe that you—as U.S. Soccer members, stakeholders, sponsors and partners—deserve to hear ours,” he wrote.

Soon after holding a conference call with reporters about the letter late Monday afternoon, Cordeiro emailed the women’s players and wrote that, “pressure has been building from Congress, the media, and even our longstanding sponsors, not to mention our own Federation members, asking questions,” according to a source familiar with the situation.

The federation’s Monday statement came close on the heels of the euphoria generated by the U.S. women’s team’s July 7 victory over the Netherlands for its second consecutive World Cup title and fourth title overall. The victory spurred chants of “equal pay” at the final in Lyon, France, and again at a ticker-tape parade held for the team in New York a few days later.

U.S. Soccer and its women’s team soon will head into mediation over the lawsuit filed by all 28 members of the U.S. women’s national team player pool. The suit alleges that the federation illegally pays the women less than the men, despite the women’s superior results. The men haven’t won a World Cup.

The federation pays the members of the U.S. women’s team a $100,000 base salary and $67,500-$72,500 annually to play in the NWSL, according to its Monday letter. The U.S. women also can earn bonuses for playing in national-team games.

The federation didn’t release information about the men’s bonus structure.

This article was originally published by The Wall Street Journal.