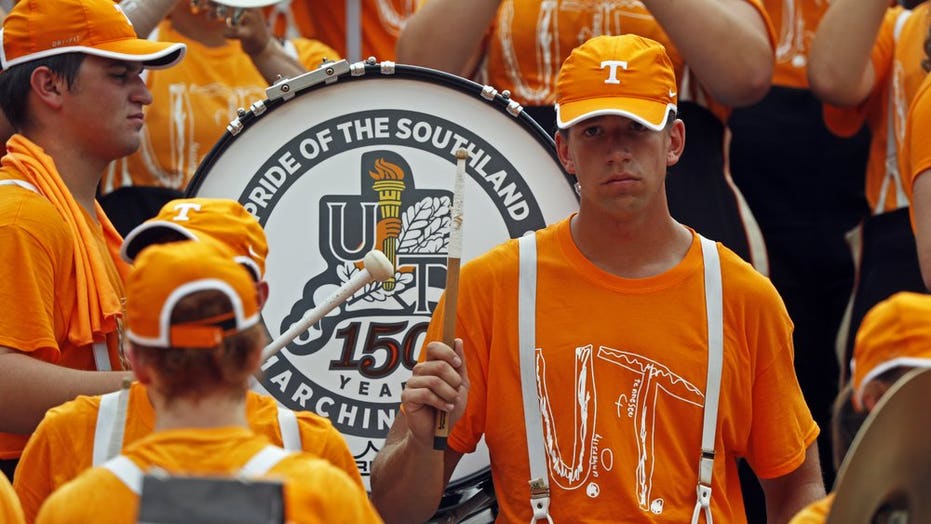 The University of Tennessee can’t get enough of one of its biggest fan’s original shirt design.

The university's Pride of the Southland band showed off their school spirit by wearing a Florida fourth-grader's special T-shirt before the Volunteers' football game against Chattanooga on Saturday.

Members of the Pride of the Southland band perform as they wear the University of Tennessee superfan shirt after designing his own UT shirt and wearing it to his school before an NCAA college football game against Chattanooga Saturday, Sept. 14, 2019, in Knoxville, Tenn. (AP Photo/Wade Payne)

The student was bullied by his classmates after he came to school wearing a hand-drawn design over an orange shirt for Altamonte Elementary School’s college spirit day in August.

His teacher, Laura Snyder, explained in a Facebook post that her student was extremely excited to wear his shirt to support UT, but that he was bullied by his classmates for the homemade design.

"After lunch, he came back to my room, put his head [on] his desk and was crying. Some girls at the lunch table next to his [who didn’t even participate in college colors day] had made fun of his sign that he had attached to his shirt. He was DEVASTATED," she wrote.

Snyder’s post went viral and caught the attention of school officials who decided to sell the shirt online and in the campus store.

"Vols were touched to learn of the student's heart for the University of Tennesse and sent UT gifts of all sorts. Now you can share in this student's Volunteer pride by wearing his design on your shirt too," the store said on its website, which was reportedly overwhelmed by shoppers who wanted to purchase the boy's shirt.

More than 50,000 shirts have been pre-sold, and all proceeds will go the Stomp Out Bullying nonprofit, according to the university.

Snyder wrote in an update on Friday, “My student has definitely felt the love and support from people all over the world. It has been such an awesome week with my class. We’ve had lots of discussions about being kind, and I’m really excited to see my students step up their acts of kindness.”

The University of Tennessee announced on Thursday that it was offering the student honorary admission to the Class of 2032. UT also awarded the fourth-grader a four-year scholarship covering his tuition and fees starting in fall of 2028 if he decides to attend the university and meets admission requirements, they said.

Since the fourth-grader's shirt went viral, many others have joined the orange movement to stand up against bullying.

Winding Creek Elementary School in Pennsylvania was inspired by the university's support of the fourth-grader.

“Today, we celebrated what you did standing up against bullying. Our entire school wore orange to stand with you! Thanks for stepping up,” the school tweeted Thursday.