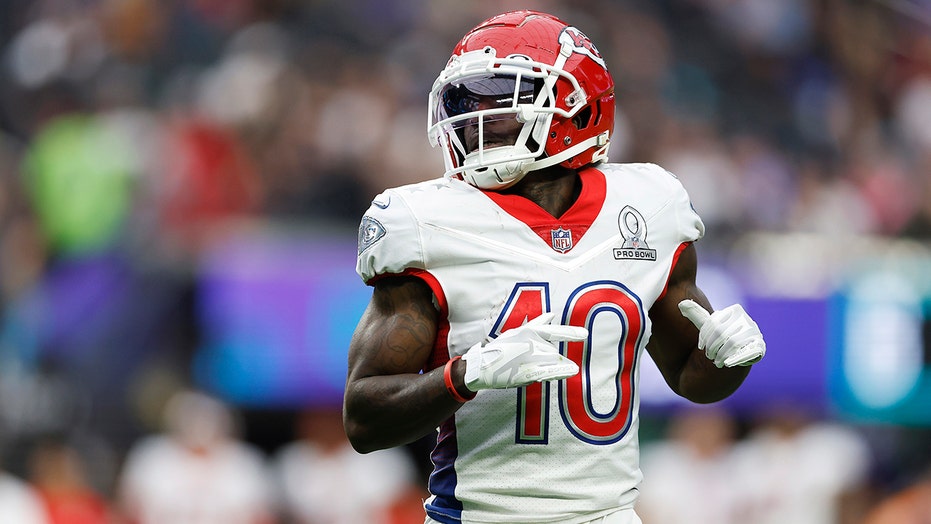 What we heard about the Tyreek Hill departure from the Kansas City Chiefs is that multiple teams were involved and ultimately it came down to a decision between the New York Jets and Miami Dolphins.

Except on Thursday, Hill made it clear it was never much if any decision at all.

Agent Drew Rosenhaus, who represents Hill and nearly 100 other NFL players, said the Jets actually worked out a trade with the Chiefs for Hill first. And then the Dolphins entered the picture, leading Hill to pick them.

Tyreek Hill #10 of the Kansas City Chiefs and AFC looks on in the second half of the 2022 NFL Pro Bowl against the NFC at Allegiant Stadium on February 06, 2022 in Las Vegas, Nevada. (Christian Petersen/Getty Images)

It was the best-case scenario for the Chiefs and Hill’s camp that there were multiple teams bidding on him at the end.

But Hill made it seem obvious it was never really close.

"I’m basically from here, dog," Hill said of South Florida. "I’m here all the time. This is home for me, for us."

Kansas City Chiefs wide receiver Tyreek Hill (10) reacts with teammates after scoring a touchdown during the second half of an NFL football game against the Denver Broncos, Sunday, Oct. 25, 2020, in Denver. (AP Photo/David Zalubowski)

"This where I train at in the offseason, believe it or not … I had to come back, come home," he added. "I got a family here, I got relatives here, so I’m always here, man. So why not Miami?"

Hill just conducted a very entertaining introductory press conference with the Dolphins, in which he offered his thoughts on coach Mike McDaniel, quarterback Tua Tagovailoa, and new teammate Jaylen Waddle -- another speedster who might soon be involved in a race against Hill.

"We going to chop it up, maybe get a few workouts in, maybe even a race," Hill said. "Because wherever I go, the Cheetah (Hill’s nickname) has to prove he’s the fastest on the team no matter what. I mean that."

Hill goes from Pro Bowl quarterback Patrick Mahomes in Kansas City to Tagovailoa in Miami, but he doesn’t seem worried about the change.

Hill is the NFL’s highest-paid receiver now on a per annual basis as his four-year, $120 million extension has him averaging $30 million per season. Pressure to perform?