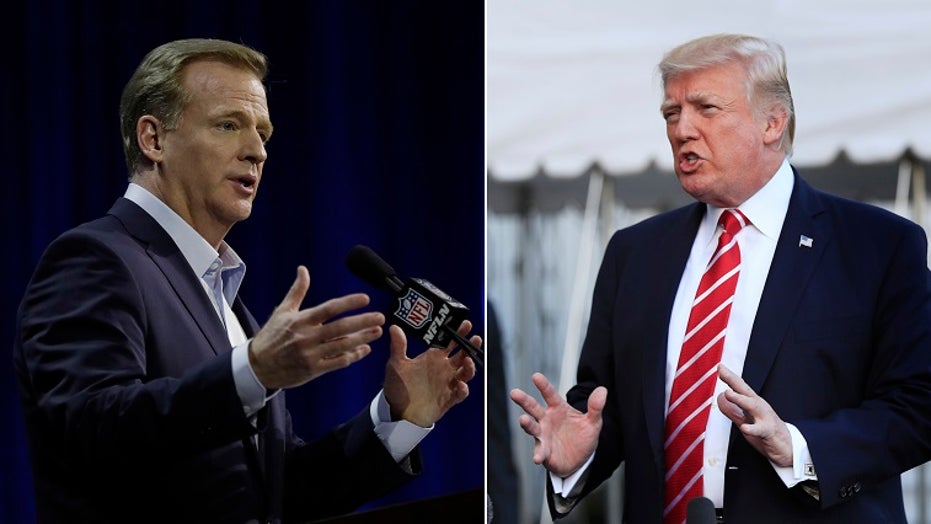 President Trump took a shot at the NFL during his rally Saturday night in Tulsa, Okla., calling out Commissioner Roger Goodell’s video on “Black Lives Matter” from earlier this month and his encouragement for players to protest peacefully.

“Explain this to the NFL,” Trump said. “I like the NFL. I like Roger Goodell. But, I didn’t like what he said a week ago. I said, ‘Where did that come from in the middle of the summer? Nobody’s even asking.’

“We will never kneel to our national anthem or our great American flag,” Trump added.

“We will stand proud, and we will stand tall. I thought we won that battle with the NFL. Their stadiums were emptying out. Did you see those stadiums? Took them a long time to get you back. Lot of people didn’t like that. You know, lot of people that you wouldn’t even think would care that much. I’ve had people that I said, ‘These are super-left liberals,’ and they didn’t like it.”

In the wake of the police-involved death of Minneapolis man George Floyd and the ensuing protests, Goodell released a video statement admitting the league failed to listen to the players when they knelt during the national anthem to protest racial injustice and police brutality.

“We, at the National Football League, believe black lives matter,” he said. “I personally protest with you and want to be part of the much-needed change in this country.

“Without black players, there would be no National Football League and the protests around the country are emblematic of the centuries of silence, inequality, and oppression of black players, coaches, fans, and staff. We are listening, I am listening, and I will be reaching out to players who have raised their voices and others on how we can improve and go forward for a better and more united NFL family.”

Trump also lashed out at Goodell earlier this month, wondering whether he was going to allow players to kneel.

“Could it be even remotely possible that in Roger Goodell’s rather interesting statement of peace and reconciliation, he was intimating that it would now be O.K. for the players to KNEEL, or not to stand, for the National Anthem, thereby disrespecting our Country & our Flag?” he tweeted.