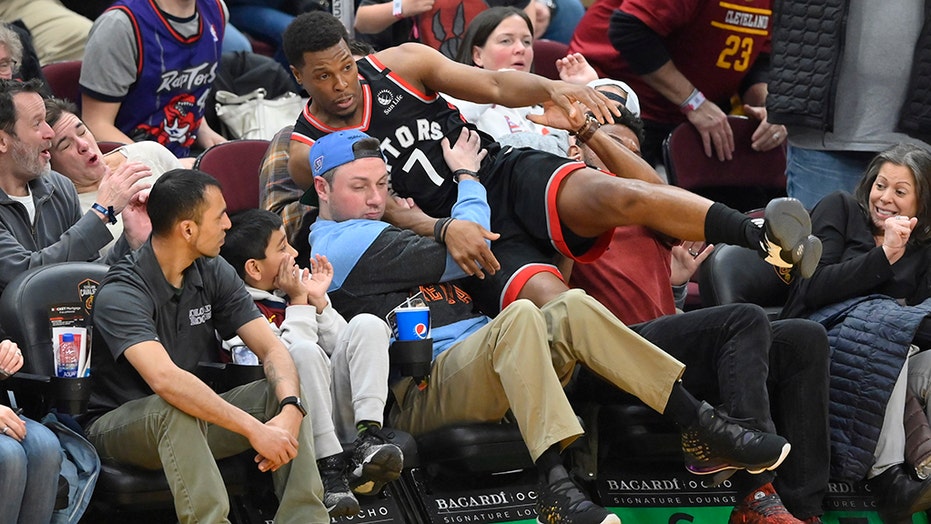 Toronto Raptors’ guard Kyle Lowry says there’s no room in the NBA for fans like the one who shoved him during Thursday night’s game against the Cleveland Cavaliers.

Lowry was attempting to save a missed shot by teammate Pascal Siakam that was headed out of bounds during the fourth quarter when he landed on two fans in the first row.

ROB GRONKOWSKI THINKS TOM BRADY SHOULD ‘TEST THE MARKET’ AS A FREE AGENT: ‘HE DESERVES THE OPPORTUNITY’

Toronto Raptors guard Kyle Lowry (7) falls in to the stands in the fourth quarter against the Cleveland Cavaliers at Rocket Mortgage FieldHouse. (David Richard-USA TODAY Sports)

One of the unidentified fans could be seen pressing his hands against the six-time All-Star’s back as he returned to the court. Lowry turned and looked at the fan as the play continued.

“Diving for a loose ball and a fan’s pushing you, that’s unbelievable man,”  Lowry told reporters following the game.

“The NBA fans shouldn’t be represented by people like him. That’s the second time it’s happened to me and it’s kinda getting crazy because the next time it happens, I don’t know if I’m going to be able to control myself and hopefully I will.”

Lowry was pushed by Mark Stevens, a minority owner of the Golden State Warriors, during last season's NBA Finals when he dove into the stands going after a loose ball under similar circumstances.

Stevens was fined $500,000 and banned for one year by the league, USA Today reported.

It was not immediately clear if the person who shoved Lowry would be subject to a similar fine.

“Fans like that shouldn’t be in our buildings and our arenas,” Lowry said. Toronto went on to win 115-109.